Papua New Guinea will send 100 soldiers to help with efforts to fight bushfires in Australia. 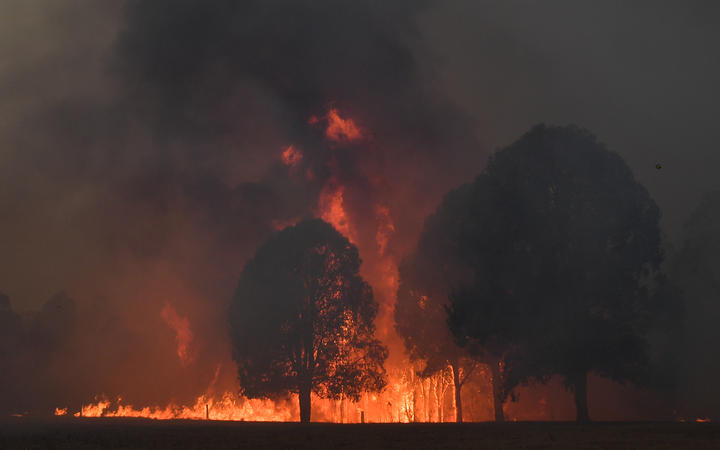 Smoke and flames rise from burning trees as bushfires hit the area around the town of Nowra in New South Wales on December 31, 2019. Photo: Saeed Khan / AFP

Australia's High Commissioner to PNG, Bruce Davis, said the initial deployment would assist the Australian military with its response.

Mr Marape said Australia was the closest friend of PNG and was always the first to help in times of adversity.

The deployment of 100 PNG Defence Force personnel will cost the government just over $US1 million.

PNG Defence Minister Saki Soloma said 76 of the team would be from the engineering battalion in Lae, while the remaining would consist of field engineers and support staff from the Taurama based battalion.

A Royal Australian Airforce Hercules is scheduled to arrive in PNG on Sunday to collect the team before returning to Australia on Monday.

Mr Soloma said the immediate task would be to work alongside Australian counterparts in clearing roads and bridges blocked by fallen trees, so that firefighters could reach affected areas.

Meanwhile, an aviation company based in PNG's Mount Hagen has sent a helicopter to Australia to help fight the bushfires.

The National reports Hevilift Aviation has made the aircraft available at its own cost.

Chief pilot Mark McCaughan said the helicopter was crewed by a team of three with experience fighting bushfires.

He said it could drop 5000 litres of water from its firefighting bucket and carry five tonnes of supplies to isolated communities.

Vanuatu announced earlier this week that it would donate $US175,000 to the bushfire recovery effort.

Tommy Remengesau's letter offers moral support at what he calls a challenging time.

Mr Remengesau said the hearts of Palau had been weighed down by the destruction witnessed through the media.

The president said his nation stood resolutely by Australia as a friend and ally.