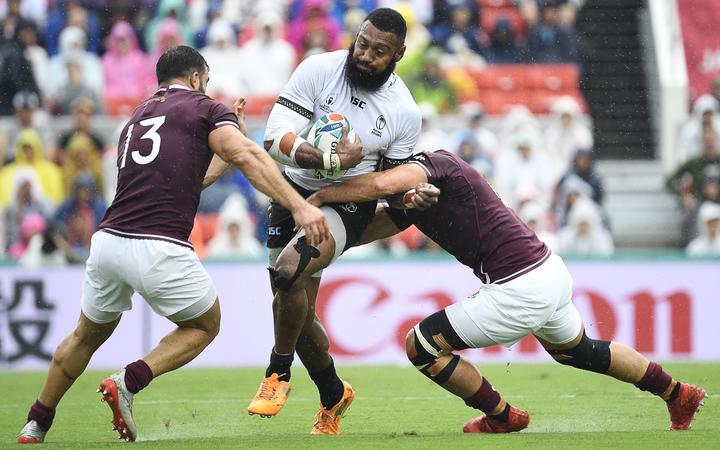 The Flying Fijians dominated possession and territory in the opening minutes at the Hanazono Rugby Stadium in Higashiosaka but it took until the 20th minute, and a piece of individual brilliance from Semi Radradra, to finally trouble the scorers.

Receiving the ball out on the left-hand touchline just inside the Fiji half, the former rugby league star stabbed a grubber kick behind the Georgian defence and regathered before handing the ball off to Waisea Nayacalevu who raced away 40 metres to score his second try of the tournament.

The midfielder should have been in again eight minutes later, following a slick interplay of passes between Radradra, Levani Botia and Nayacalevu down the left-hand touchline, that started just only for the unmarked Stade Francais man to spill the final pass with the try-line beckoning.

The Lelos threatened to go the length of the field in the 32nd minute after the Georgian halfback Vasil Lobzhanidze pierced the Fijian defence from a five metre scrum and began a sweeping move across the field and into the opposition 22.

Fiji winger Josua Tuisova can count himself lucky to still be on the field after he got caught in a high tackle, while another try attempt went begging from close range when the outstretched ball-carrier lost control as he tried to place the ball on the Fiji goal-line.

The Lelos did finally get on the board with a penalty from fullback Soso Matiashvili five minutes from halftime as Fiji went into the break leading 7-3.

another strong move down the left wing five minutes into the second spell, with fullback Kini Murimurivalu offloading in spectacular fashion to Semi Radradra, who beat one defender before passing inside to the supporting Lomani, who wrestled the ball down despite the best efforts of Georgian defenders, to extend their lead to 12-3.

Radradra was instrumental again as Fiji scored again five minute later - this time down the right-hand side, getting on the outside of Georgia's Todua before feeding Josua Tuisova, who skipped out of the final tackle to open up a 17-3 buffer.

But just when the Flying Fijians were threatening to run away with the game, Georgia finally found the try-line. Legendary flanker Mamuka Gorgodze was on the end of an unstoppable rolling maul, with Matiashvili adding the extras to cut the deficit to seven points with 26 minutes to play.

Fiji quickly restored order four minutes later as Radradra finally got a try of his own, finishing off a 60 metre move directly from a scrum to secure a vital bonus point and stretch their lead to 24-10.

Semi Kunatani was next on the scoreboard on his Rugby World Cup debut after second five Levani Botia weaved past a handful of Lelos defenders before offloading to the former sevens star.

31-10 became 38-10 in the blink of an eye as Fiji scored directly from the kick-off, with reserve lock Api Ratuniyarawa crossing for their sixth of the afternoon with 10 minutes remaining.

Fittingly, it was man of the match Radradra who scored Fiji's final try four minutes from full-time, as Pacific Islanders capitalised on another error from Georgia inside their own 22.

Fiji's first win of the World Cup lifts them to second in Pool D with seven points from three games, although Wales, Australia and Uruguay still have a game in hand.

Their final pool match is against Wales in Oita on Wednesday.