A couple of hardcore Manu Samoa fans became the star attraction off the pitch before the Scotland v Samoa match, entertaining a queue of rugby lovers for three hours ahead of the game. 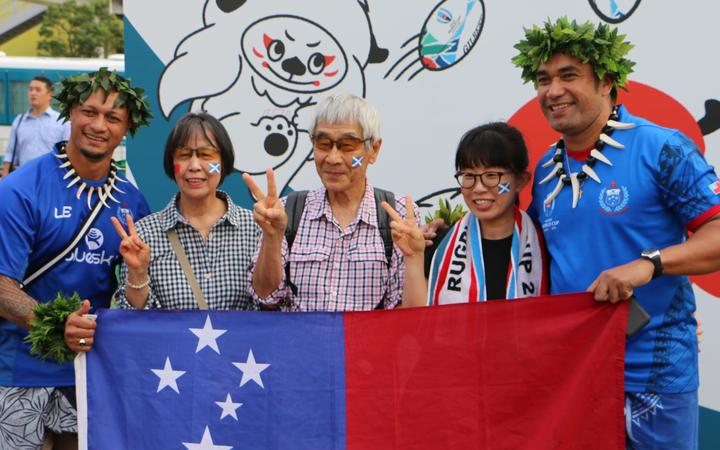 As the crowd rolled into the Kobe Misaki Stadium it was difficult to ignore the cheehoos (the Samoan equivalent of 'yahoo'), singing and cheering coming from the two men dressed in Manu Samoa jerseys, lavalava and Samoan Ula Nifo necklaces.

A crowd gathered around them early, and the numbers didn't begin to dwindle until just before the match began.

About three hours into the spontaneous photo-taking marathon one of the men, Bistol Sefo, who lives in Yokohama with his Japanese wife, stepped aside for a break.

"I'm having a little bit of rest, the boys are still going but I need to keep my energy for cheering for the [Manu Samoa] boys."

Sefo, who played rugby for the YCAC club in Japan before hanging up his jersey five years ago, says they're the number one supporters for the Manu Samoa. "Wherever the Manu Samoa go, we always travel.

"Today we came far away from Yokohama, about nine hours by bus, so we haven't had much sleep today. But we came to support our country's team. I'm so proud of the boys here." 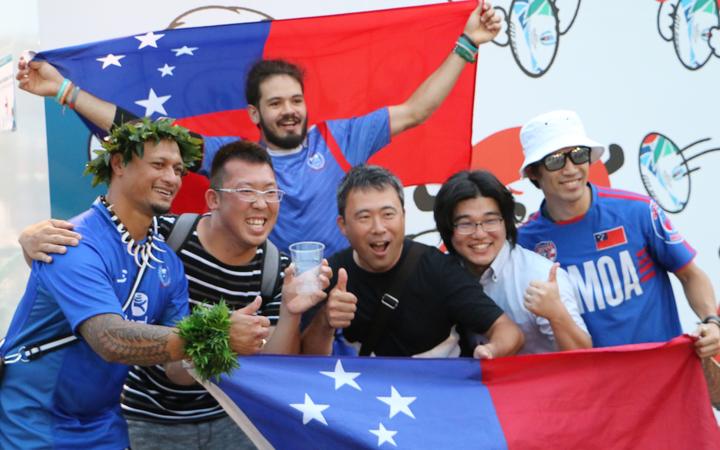 When asked if this sort of thing happens to him often, he said "Of course, this is a Japanese way. They love Samoa, they love our country, they love when we wear traditional wear. They love to see that. I'm so proud of that."

He said it all began when one person asked to take a photo with them, and then they saw people start to make a queue.

It wasn't long before other Manu Samoa supporters decided to join in on the fun, and stuck around to pose with fans, sharing in some of their glory.

"We just met some of these boys today," said Sefo, "but I don't know them."

Sadly, it was not a great night for Manu Samoa fans - their team were beaten by Scotland, 36-0.