Manu Samoa will make a call on the fitness of captain Jack Lam and halfback Scott Malolua tonight before flying out to the Rugby World Cup in Japan.

Flanker Lam was replaced before late in the first half of Saturday's 34-15 defeat by Australia in Parramatta after taking a knock to the eye while attempting to tackle Sekope Kepu, with Malolua following suit a couple of minutes later after dislocating his shoulder. 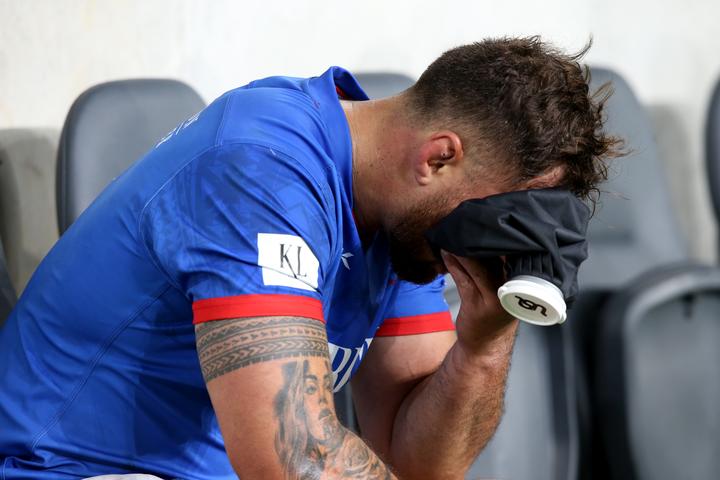 Head coach Steve Jackson said Malolua's shoulder was popped back in by the team's medical staff, but he remained their biggest injury concern before hopping on the plane to Tokyo tomorrow morning.

The Manu trailed by 19 points at half-time, but replacement halfback Dwayne Polataivao took his chance in the second spell, scoring two tries in eight minutes to slash the deficit to seven points with 18 minutes remaining. 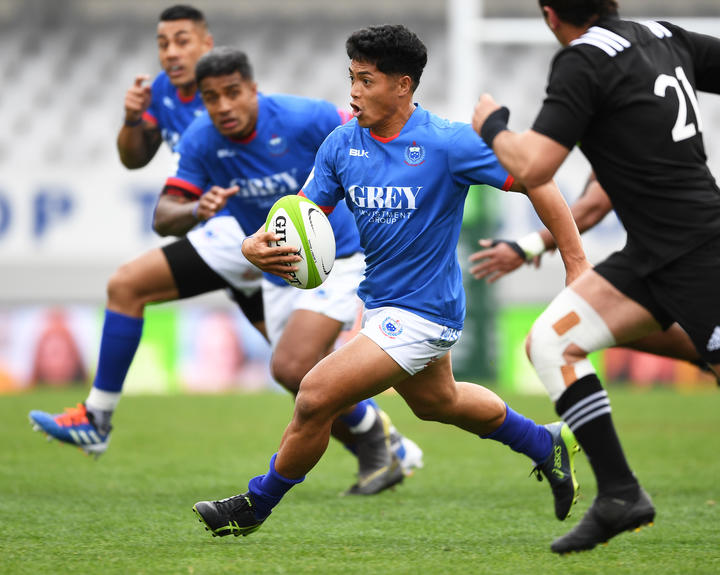 Scott Malolua dislocated his shoulder on test debut against the Wallabies. Photo: Photosport

However, Dane Haylett-Petty and Matt Toomua scored in the final 10 minutes to deny the Pacific Islanders a repeat of their famous win over the green and gold from eight years ago.

"We understood that the tries they scored were from our mistakes and when you're playing against world class sides like Australia you can't afford to turn ball over like we did and they capitalised on it straight away," said head coach Steve Jackson.

"We came into half-time 22-3 down but spirits were still high and the boys still had plenty left in the tank so we knew we had to start well after half-time and I think we did, and some of the changes that we made lifted the spirits again and a couple of soft tries in the end there probably blew the score out a wee bit but pretty happy with the effort." 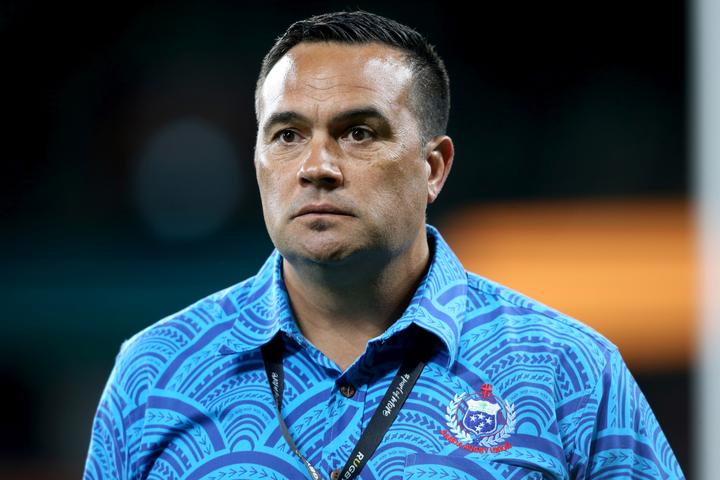 Steve Jackson said they take confidence from the way they fought-back in the second half at Bankwest Stadium and know that if they stop making silly mistakes they can compete with top teams that like to play with pace.

Hooker Motu Matu'u was a part of the reserve front row that came on early in the second spell and caused the Wallabies serious strife at scrum-time.

"The boys on the bench had a bit fire burning in the belly to actually get out there and get the job done and when we got out there you actually see in the Wallabies' eyes they were getting rocked a bit so we just really needed to keep on top of that and try to strangle them a little bit more," he said.

"We didn't really get the result that we actually wanted but technically and tactically I think we got everything that we set out to achieve," said the London Irish number two.

"I think there were a few facets of play in the game where we kind of just lost a bit of concentration that actually got them into the game but our main weapon was to really dominate the physicality and dominate the collisions and that seemed to work for us at times so...I think there's a good stake in the ground for us to kick off the World Cup." 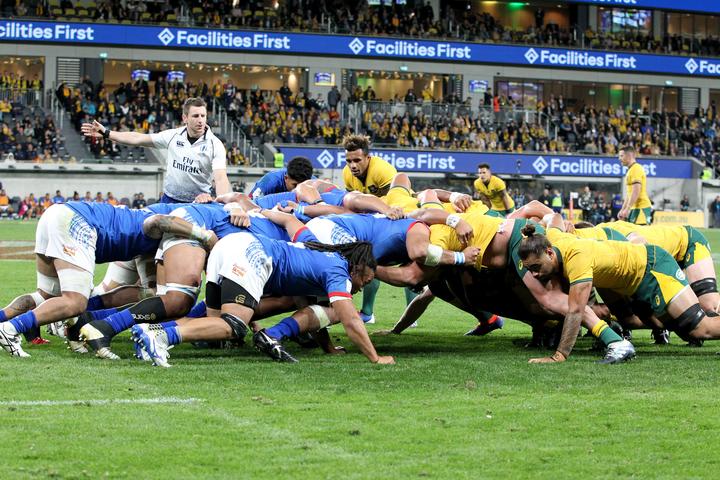 Manu Samoa put the Wallabies scrum under pressure in the second half. Photo: PHOTOSPORT

Dwayne Polataivao said everyone in the squad has an important role to play.

" All I had to do was just put it down. Some of the boys created some holes for me just to finish so it was awesome. The crowd got in behind us and we felt the energy in the second half so it was great to be out there."

"We're a team of 31, we're there to compete and a lot of the boys came off the bench and brought some energy and that's what we're asking for as a 23 is to come and perform and I thought we did that quite well in the second half." 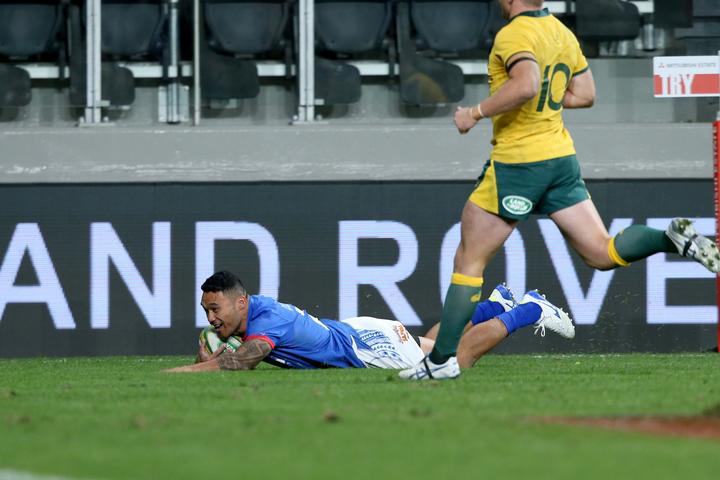 Saturday night's pre-World Cup hit-out was Samoa's first test against Australia in eight years and their first against a tier one nation since 2017. Motu Matu'u said regular matches against the top ranked countries will help them be more competitive.

"As part of the tier two nations we always ask for more time together and now that we have the time together we've managed to actually put in some performances that we were happy about and we can improve going forward," he said.

"I think that's the best thing about playing the tier one countries is - you get a gauge on where you are - and I think that's why tier two nations need to play these tier one nations more often, so we can keep competing at that top level."

Manu Samoa have a week in Iwaki in the Fukushima Prefecture before their opening World Cup Pool A match against Russia in Kumagaya. 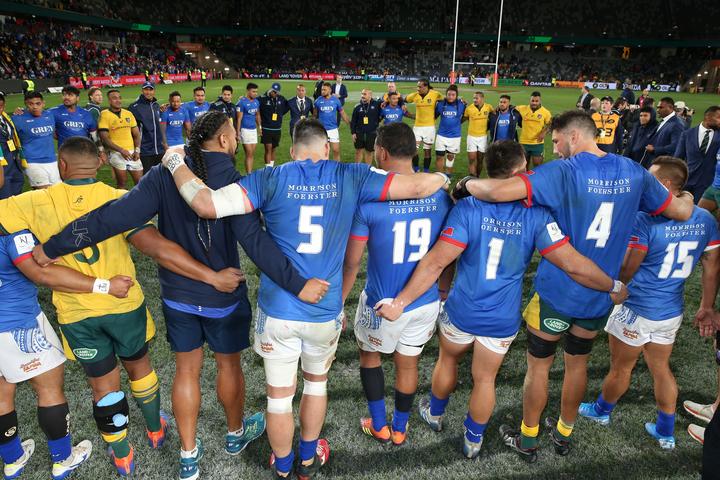