Pacific leaders have declared a climate crisis in the region and are demanding an end to coal mining. 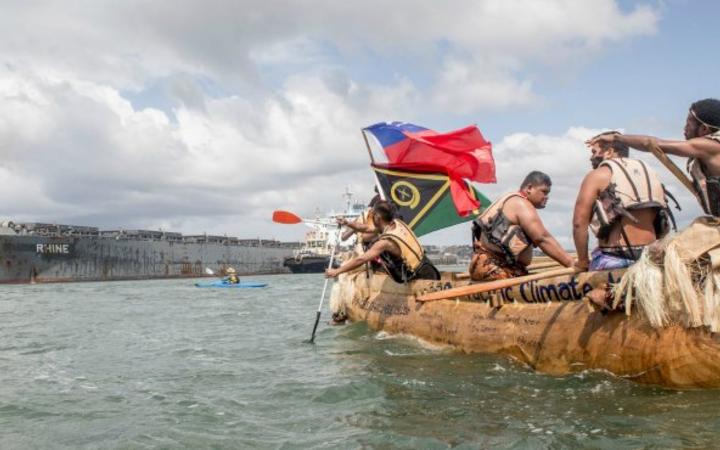 The declaration was signed by several regional leaders at the Pacific Islands Development Forum in Fiji on Tuesday.

The declaration expresses grave concerns about the impacts the climate crisis will have on the Pacific.

In it, the Pacific Islands Development Forum called on governments of countries with high carbon emissions to stop hindering climate change efforts.

It also demands all coal producers immediately stop any new coal mining and phase out all existing production over the next 10 years.

The move was welcomed by environmental non-profit 350.org, with founder Bill McKibben calling it a "very powerful manifesto".

"The election, in the Pacific, of the government of Australia that continues to want to expand coal mines is a slap in the face to everyone else in that region and in the world," he said in a videoed statement.

10 Pacific Island nations declare a climate emergency--that's about 5% of the world's countries in one day. Many thanks for this leadership!https://t.co/92Oh6jf3FB

Frank Bainimarama will be attending his first summit since 2008.

Fiji was suspended in 2009 in the wake of the 2006 coup and the abrogation of the then-constitution.

Mr Bainimarama had said he would stay away until New Zealand and Australia were no longer full Forum members.

In a speech at the Pacific Islands Development Forum - which was set up by Fiji after its suspension - Mr Bainimarama said the region cannot accept any watered-down commitments.

At last year's forum, Australia was exposed as having attempted to water down a resolution that declared climate change the region's greatest security threat.

"Fiji and the Marshall Islands have already announced our intention to revise our own nationally determined contributions, and I urge this ... membership to do the same and demand the same from the more developed economies, including and especially our large neighbours in the Pacific.

"We should accept anything less than concrete commitments to curb greenhouse gas emissions in line with the most ambitious aspirations of the Paris Agreement. We cannot allow climate commitments to be watered down at a meeting hosted in a nation whose very existence is threatened by the rising waters lapping at its shores."