The Secretary General of the Pacific Islands Forum has called for an audit of a nuclear dome in the Marshall Islands which may be leaking, adding to mounting concern over the radioactive waste-filled structure.

Campaigners have warned for years of the danger posed by the 18-inch think concrete dome, perched on a small island in Enewetak Atoll and used to store nuclear waste left over from atomic testing conducted in the 1950s and 1960s.

"What is lacking is independent verification," Dame Meg Taylor said on Tuesday. "Which frightens people."

Speaking during a meeting with the president of the neighbouring Federated States of Micronesia, David Panuelo, Dame Meg said there needed to be an independent audit of the site to determine whether it was leaking in order to either calm fears or allow action to be taken.

"The issue now is the suggestion that the dome is leaking [and if true], the implications for life is very important," she said, according to a summary of the meeting released by the FSM government.

Mr Panuelo said FSM was "sensitive" to the issue, but that "as a region we have the right to band together".

He said the audit could be conducted by the International Atomic Energy Agency but there needed to be discussions with the United States first.

"I think the United States will understand that, we have close ties with them."

During a Pacific tour in May the United Nations Secretary-General, Antonio Guterres, raised concerns about the Enewetak dome, saying the region needed help to deal with the fallout of nuclear testing.

"I've just been with the president of the Marshall Islands [Hilda Heine], who is very worried because there is a risk of leaking of radioactive materials that are contained in a kind of coffin in the area," the AFP news agency reported him as saying.

In 2015, an expedition to inspect cracks in the dome found no significant surface leaks of radioactive material. 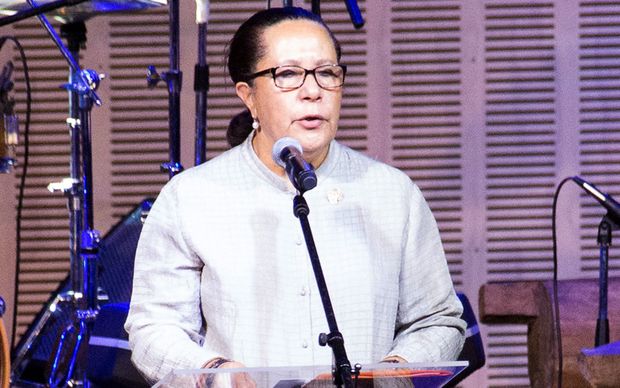