Mr O'Neill is under growing pressure to resign after an exodus of MPs from his ruling People's National Congress party.

They've merged with the opposition which plans to table a motion of no confidence against the prime minister this week and claims to have a majority in the 111-seat parliament.

Mr O'Neill released a statement on Monday afternoon saying that at present his coalition has more than 60 MPs.

"Coalition Members are very much intact and supportive of the Government led by the People's National Congress Party."

He said that an attempt to destabilise a duly mandated government through threats, intimidation and fake news through social media is now taking place in this country.

"I urge all thinking Papua New Guineans to refrain from partaking in this illegal attempt to bring down a properly mandated government," he said.

Mr O'Neill has ruled since late 2011, during which time he has enjoyed a large majority support in parliament.

But defecting MPs have voiced concern that Mr O'Neill is not consultative, has allowed governance processes to be weakened, and has failed to protect the interests of grassroots communities in large resource projects.

One of the senior MPs who defected from the government on Monday, Enga governor Sir Peter Ipatas, said his patience had run thin with Mr O'Neill.

"I have wanted this government and I have been talking to the prime minister for many years," Sir Peter told a news conference at the Laguna Hotel, where the opposition had set up camp ahead of the vote. "It has fallen on deaf ears."

The influential Highlands leader resigned from the ruling party a week ago, saying he would return to the People's Party which he founded thirteen years ago.

After initially saying his party would remain in Mr O'Neill's coalition government, Sir Peter's move to the Laguna strengthens the opposition's position.

But according to the prime minister, PNG's political stability is at stake due to the movements away from his party and government.

"This stability has come under threat because of the ambitions of some self-interested individuals who have not clearly outlined their policies to the Nation over the past 20 months in any way shape or form," he said.

On Monday, dozens of MPs -- they say 57, but the final number is not known -- were camped at the Laguna Hotel discussing the make-up of their proposed alternative government, which would include an alternative prime minister. 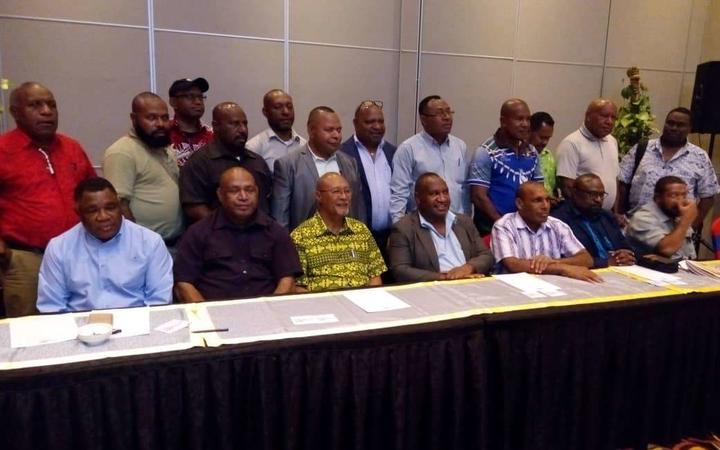 While listing his government's purported achievements in education, health and infrastructure development since 2012, Mr O'Neill also took a swipe at the main opposition party.

"It is disappointing to see the National Alliance Party vigourously encouraging the behind the scenes activities to destabilise political parties when they had enjoyed the legitimacy of the legislation over two terms in government, but NA is not prepared to allow other parties mandated through election to the same opportunity to govern."

Still, Mr O'Neill continues to have one firm ally. Sam Basil, his newly-installed finance minister who was a leading opposition figure only one year ago.

Mr Basil's Pangu Pati split last week after six MPs defected to the opposition camp. But the nine remaining MPs on Monday announced that they were joining the Melanesian Alliance.

"We are inside the coalition government's camp, and of course when we are here you already know the answer," Mr Basil said in a white polo shirt adorned with the Melanesian Alliance logo.

"We will try our best and we will commit to the current government."