Cyclone Pola is forecast to only affect coastal waters as it moves away from Tonga this morning. 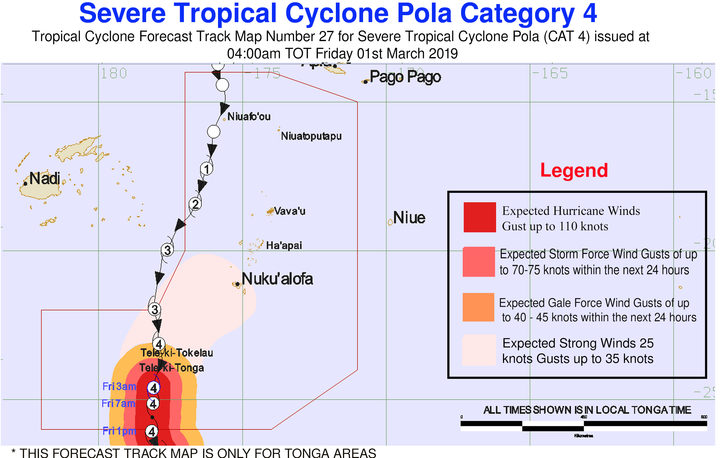 A hurricane warning remains in force for Tele-Ki-Tonga and Tele-Ki-Tokelau coastal waters.

While it is now a category 4 storm, the Tongan Met Service says it will not affect any of the land areas of Tonga.

The strong wind warning for Tongatapu and 'Eua land areas and coastal waters has now been cancelled.

However, a heavy damaging swell warning remains in force for Tongatapu, 'Eua, Tele-Ki-Tonga and Tele-Ki-Tokelau coastal waters, but is now cancelled for Ha'apai coastal waters.

Tropical Cyclone Pola is moving south at 18km/hr and the maximum winds near its centre are about 165 km/hr, with momentary gust up to 205km/hr.

The director of Tonga's National Emergency Management Office, Mafua Maka, said yesterday, there had been no reports of damage from the cyclone in Tonga.