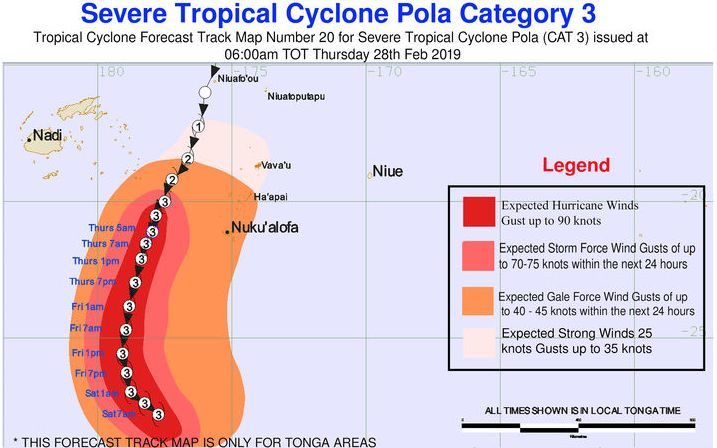 Tropical Cyclone Pola is moving south-southwest at the speed of 10km/hr. The maximum wind speed near the center is about 120 km/hr with momentary gusts of up to 170km/hr.

Heavy rain and gale force winds will affect Tongatapu and 'Eua this morning.

Although the category 3 cyclone is beginning to weaken, a hurricane force winds warning is in force for Tele-ki-tonga and Tele-ki-tokelau coastal waters.

But it has now been downgraded to a strong wind warning for Ha'apai land areas and coastal waters.

While a strong wind warning has been cancelled for Vava'u land areas and coastal waters.

A heavy rain warning and flash flood advisories remains in force for Tongatapu and 'Eua land areas but is now cancelled for Ha'apai land areas.

A heavy damaging swell remains in force for Ha'apai, Tongatapu, 'Eua, Tele-ki-tonga and Tele-ki-tokelau coastal waters but it is now cancelled for Vava'u and the Niuas coastal waters.

Gale warning for Vatoa and Ono-I-lau in Fiji

Meanwhile, gale to storm force winds, heavy rain and high seas affecting Vatoa and Ono-i-lau in Fiji are expected to ease by this afternoon.

Strong winds, heavy rain and very rough seas affecting the Lomaiviti Group and remaining parts of the Lau Group are also expected to ease during the day.

But a strong wind warning warning remains in force for the rest of the Lau and Lomaiviti group.

A heavy rain warning remains in place for the Southern Lau group.

On its present track, the cyclone centre is expected to be located about 190km south of Ono-I-Lau at 3pm today.

RNZ Pacific will be broadcasting cyclone warnings via the Tongan and Fijian Met services throughout the day as they come in.

The public is advised to monitor local radio broadcasts for the latest information and advisories.