The red alert cyclone warning has been re-issued to central parts of Vanuatu as Tropical Cyclone Oma spirals northwest of Santo.

Oma has moved closer to Santo over the past three hours and is currently travelling in a southeasterly direction with winds of 95 km/hr at its centre and the potential for gusts of 130km/hr. 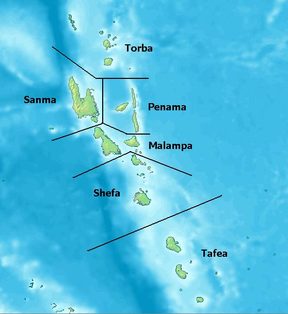 The provinces of Vanuatu Photo: Wikipedia

At 2pm NZT on Thursday TC Oma was 145km west northwest of Santo.

Penama and Malampa Provinces have had their alert levels raised and are warned to prepare for damaging high winds, heavy rain, flash flooding and phenomenal sea swells.

Islands in Torba and Sanma Provinces of Vanuatu have so far been the most affected by the cyclone which remains a Category 2 system.

Shefa Province is on yellow alert.

Meanwhile, Vanuatu's Meteorological Service said there is a chance Tropical Cyclone Oma may yet strengthen into a Category 3 system.

Forecaster Ellen Luke said a high pressure system in the Tasman Sea appears to be currently blocking Oma from moving south and the longer it remains over warmer waters the chance of increasing intensity goes up.

She said high winds and heavy rain still persist in northern Vanuatu islands especially the Torres group and there is a lot of uncertainty over the cyclone's duration, path and intensity.

"The chances of it to develop into a Category 3 it might have a likely chance of it developing since if it stays further up north for some time because of the warm surface sea temperature that it will be on."

#Vanuatu Red Cross volunteers in #Sanma have been going door-to-door informing people about incoming #CycloneOma, where safe buildings, like churches, are for evacuation & sharing other vital info on how to prepare for a cyclone. pic.twitter.com/2Z5YNpZN1r