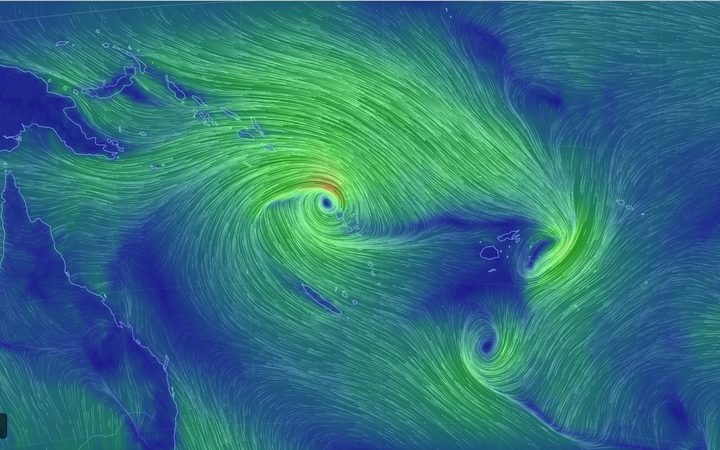 Tropical Cyclone Oma has been upgraded to a Category 2 system by Vanuatu's Meteorological Service.

Oma is now about 55km west of Santo and is slowly moving east southeast.

Winds close to the centre are estimated to be 95km/h and gusts of 130km/h are expected.

The number of provinces predicted to bear the brunt of Cyclone Oma has also been extended and now includes Torba, Sanma, Penma and Malampa which have been placed on red alert by the National Disaster Office.

Shefa Province and the capital Port Vila is on Yellow alert meaning it too must be ready to shut down.

The latest cyclone warning said seas would be very rough with heavy to phenomenal swells expected and there was a marine warning in force for the whole of Vanuatu.

Crews of vessels are strongly advised not to go out as high seas are expected for northern and central coastal and open waters.

Schools and businesses are shutting down with people warned to stay at safe at home.

Communications Officer for the National Disaster Management Office, Presley Tari, said with an increasing number of disasters over recent years, most people in Vanuatu were alert all the time and knew what to do.

He said more parts of the country were likely to shut down as the cyclone moves south.

"NDMO is advising everyone to stay alert in their houses. Prepare themselves for the cyclone coming. So we are asking those with the red alert to close down their business and even the schools I think [are] already closed like in the places where the red alert is."

Mr Tari said there were already reports on social media of damaged crops on northern islands from brief wild winds over the weekend ahead of Cyclone Oma.

Head forecaster for Vanuatu's Meteorological Service, Fred Jockley, said people needed to heed messages from the National Disaster Management Office to prepare themselves for the cyclone.

"For those who have not taken the warning seriously, they should start preparing themselves before the system actually comes over if it maintains its track of movement."

Torba Province includes Banks and Torres Islands with a population of around 10,000 people and Sanma is home to 54,000 people mainly living on the islands of Santo and Malo.