The Fiji Human Rights Commission has called for an independent investigation into a video which allegedly shows at least three police officers beating people lying on the ground. 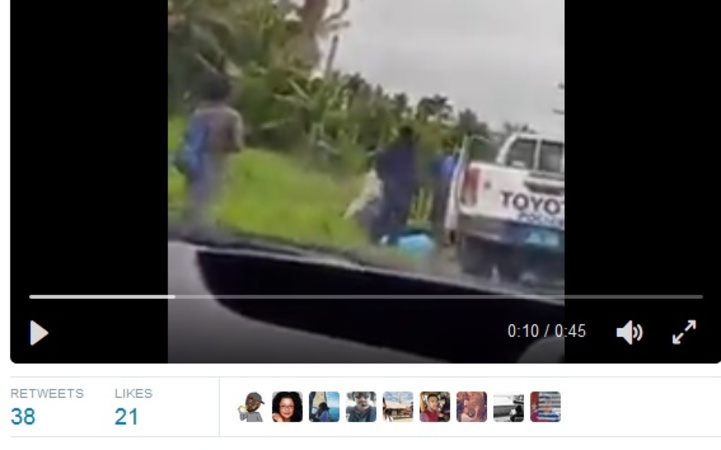 A still image from a video that emerged on social media of an alleged police beating near Pacific Harbour. Photo: Twitter

FBC News said the video was filmed by a passer-by around Pacific Harbour near Suva, and showed police using batons and kicking two men by the roadside.

The policemen were in uniform and there were three police vehicles surrounding the men and a white vehicle.

Commission Director Ashwin Raj has been quoted as saying that the commission did not condone such acts of brutality.

Police spokesperson Ana Naisoro confirmed they would investigate and has urged the public to report directly to police if they came across such incidents and avoid posting it on social media.

That has prompted an angry response on Twitter, with many pointing out that there was little trust in the police force.

@FijiYouth @naisoro_ana Its like telling rape victims to report the rape to their rapists!

The report came as Fiji's biggest ever police brutality case was in court this week, with eight policemen and a military officer - who was prime minister Frank Bainimarama's bodyguard - being tried for raping a man in custody in 2014.

The nine were being tried in the High Court in Lautoka over the rape of Vilikesa Soko, who died of his injuries.

Two weeks ago the government said it would launch a pilot project using video recording of statements in order to make the police more professional.