The principals of three schools in Samoa whose students were involved in a series of brawls last week have met with the Ministry of Education and the police to try and find a solution. 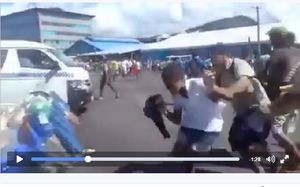 Last week, students from Avele College, St Joseph's College, and Don Bosco Vocational Training School were involved in a violent brawl outside the main bus station in the capital, Apia. In a separate incident, students from Faleata College and the Church College of Samoa were also caught fighting.

The principal of Avele College, Matafeo Reupena Matafeo, said the brawls were sparked by comments made on social media and that police were now investigating.

"We'll try and iron out all these differences because at the end of the day, students from Avele, St Joseph's and all other schools, you know we are all related," said Matafeo.

"It's just that there are probably one or two who actually started that, then has caused all these problems."

Three years ago, an increasing number of brawls prompted the Ministry of Education to push for bible studies in public schools as a measure to counter violence.

In 2012, prime minister Tuila'epa Sa'ilele Malielegaoi said he was considering a policy change for corporal punishment to be reinstated after fighting between Avele and St Joseph's colleges.