Samoa's Ministry of Education, Sports and Culture has closed Avele college temporarily for the protection and security of its students after a brawl which involved students from Avele, Saint Joseph and Faleata colleges.

Our correspondent said police also reported that students with links to the violence used social media sites like Facebook to post videos and pictures of the brawl.

On Wednesday, police arrested three students but more arrests were made yesterday following further brawls at the bus terminal behind the burnt flea market at Savalalo. 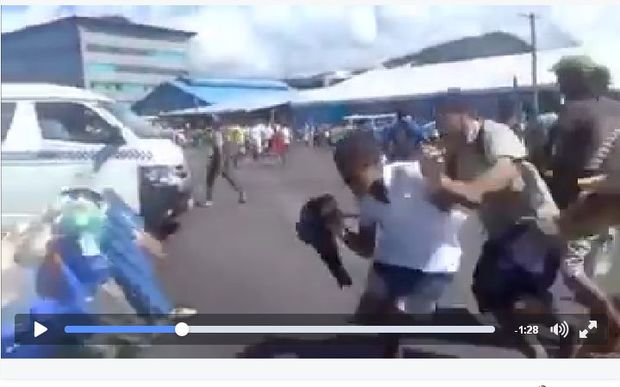 An image from video posted of the violence. Photo: Facebook: Video - Christopher Mafoe

In a facebook comment reacting to the video, Jerome Ierome said "This is the real Samoa, these are also the idiots that you will see at church on Sunday, the same idiots that their parents praise, the same idiots who will probably comment on this page and condemned this behaviour when they're older. This is the real Samoa kids who are ai valea (useless) at school but will go on to be matais because they know nothing else!"

Late last year Police in Samoa were called on to intervene after ongoing fights between school students at the Tafusi Markets.

Three years ago an increasing number of brawls and student fights prompted the Ministry of Education to push bible studies in public schools as a measure to counter the violence.