It was the terrible plight of Tara-iti (New Zealand's Fairy Tern) with just 40 odd breeding couples left in the world, mainly on Te Arai beach north of Auckland that was the initial inspiration for these songs. When I read, last year, that land at Te Arai had been sold to a rich American, John Darby, whose plans to develop the site with 46 expensive houses and a golf course for the rich had been approved, I was so dismayed that I decided I must write some music about them. Tentatively I put the idea to Denys Trussell who as a musician, poet, and environmentalist knew immediately what I was after. 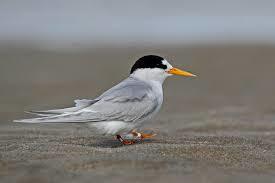 He wrote a poem that tells of the simple beauty and vulnerability of the Fairy Tern (Tara-iti). I set it to music for piano and voice but then we both felt that one song was perhaps too insubstantial by itself so he produced three more bird poems for me to set which made it into a logical set, with Tara-iti becoming the second song. The first song tells of the countless birds to be seen moving over the Hauraki Gulf in the early morning. The Pukeko provides a light-hearted third song and the Karearea (New Zealand Falcon) is the fourth – also the most dramatic.

Recorded by RNZ Concert as part of the 2015 NZSO-RNZ Concert-SOUNZ Recordings.