This is the third movement of the clarinet concerto, 'Four Māui Legends'. The other movements are:

III. Na Māui te Ahi a te Ao (Māui Brings Fire to the World)
Story: Māui wonders where fire comes from. In the night he puts out all the fires in the village.
The people are very upset but Māui promises to go to the fiery mountain and bring fire back again from the fire goddess Mahuika. She receives Māui and gives him a burning fingernail. The wicked Māui wonders how long she would continue tearing out her own nails to give him fire. He drops the nail into a stream and returns to ask again—and again and again until Mahuika is furious. She turns on him and pursues him. He changes himself into a hawk to escape but she sets the forests on fire. Māui dives into a river to save himself. Later he finds out that some of the trees in the forest have kept Mahuika’s fire. He teaches the villagers how to make fire using the wood of these trees. 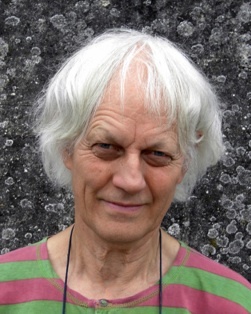 Kit Powell was born in Wellington, New Zealand, in 1937. He is a graduate of Victoria and Canterbury Universities, in mathematics and music. While studying in Europe in 1966/67 he met Brigitte, his Swiss wife. Since 1984 the Powell family has been living in Switzerland where he taught music theory  at the Zurich Conservatory until his retirement in 2004.

His works, which include compositions in orchestral, choral and chamber music, are written for traditional instruments, found objects and computer generated sounds, often using chance techniques. Many of his pieces have been specially composed for his two children, both professional musicians: Philip, a trombonist and Fiona, a soprano.

A further feature of his work is the long partnership with poet Michael Harlow, with whom he has created a series of about 20 compositions including a large choral work: 'Missa Profana', a Mass of Life.

Since living in Switzerland Kit Powell has also set numerous texts by the Swiss writer, Jürg Schubiger (1936-2014), who was awarded the Hans Christian Andersen prize for his works for young people.

Although Kit Powell has spent more than half his working life in Switzerland, he still feels strongly bound to his native New Zealand.

His book “Quite by Chance / Wie durch Zufall” (2014, Pfau Verlag) describes his musical ideas and his life as a composer.