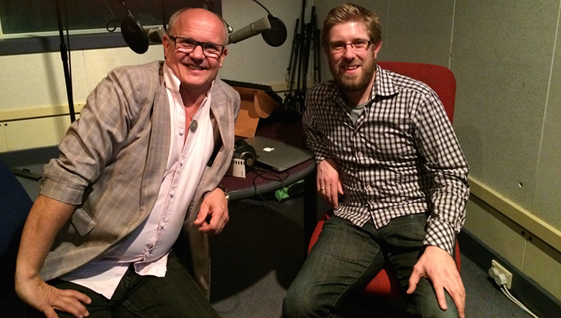 Christian Lindberg in the studio with David Bremner.

The name 'trombone' derives from the Italian word tromba - and it literally means 'large trumpet'. But the history of this instrument begins a long way before the transition to its modern name. The original name for the trombone was the 'sackbut'. The sackbut was a popular instrument during the Renaissance and Baroque periods, and would often be seen in conjunction with the cornett - not to be confused with the Brass Band Cornet - the cornett was a hybrid woodwind/brass instrument, with holes like a recorder for changing notes.

Trombone fans might get excited at the mention of the sackbut in The Bible, but alas it is not the brass instrument sackbut, but a Syrian stringed instrument resembling a harp. It was towards the end of the 15th century that the sackbut became widely known across Europe, and Henry the VII of England had at his disposal 4 Shakbusshes, - another term for the Sackbut.

The late 1700’s saw trombones used by Haydn, Gluck and most notably by Mozart in his Requiem written in 1791, where we hear a beautiful duet with baritone voice in the Tuba Mirum movement. The use of the trombones in the Requiem is notable, with the alto, tenor and bass trombones mirroring the choirs lines throughout this wonderful work.

But it was during the 19th century that the trombone began to become a fully-fledged member of the symphony orchestra. Beethoven is widely regarded as the first composer to use trombones in a symphonic setting, when they appeared on stage to perform his 5th symphony.

The turn of the 20th century saw the dawn of a period where we see the most dramatic development stylistically for the trombone. Composers like Strauss and Shostakovich had the trombone at the forefront of their works, and Stravinsky, Mahler and Ravel even turned the trombone into a solo instrument within the orchestra, giving it beautiful solo lines that had always gone to the French Horn or trumpet.

The trombone was a pivotal part of marching and military bands at the turn of the century, but it was the emergence of Jazz that saw it hit the front line, with this new sound coming out of New Orleans. Kid Ory was an early pioneer on the trombone in the jazz world, and paved the way for trombonists to follow like JC Higginbotham and later Jack Teagarden.

In the classical scene, a young virtuoso trombonist arrived on the scene in the late 20th century. It took courage and a big leap of faith to kick start his solo career, but Christian Lindberg now performs concertos and with the finest orchestras and conductors in the world. Many new works have been composed for him by composers such as Arvo Pärt, Luciano Berio, Alfred Schnittke, Mark Anthony Turnage, Folk Rabe, Toru Takemitsu, Iannis Xenakis, and Lyell Cresswell.