What to do when your children swear

Whether it's potty talk or the f-bomb sooner or later our kids are probably going to say something offensive. How do we decide what's unacceptable in our homes and what we're prepared to let slide?

Katy Gosset takes a look at swearing and its subtleties.

And yes, a little warning - the audio contains some swearing! 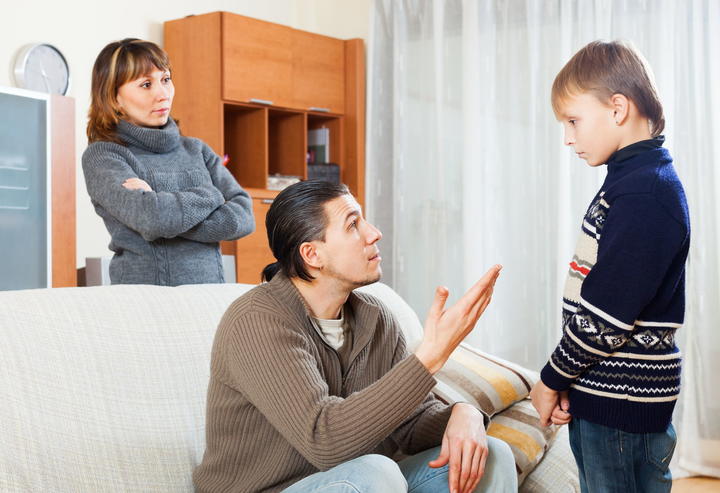 Rhiannon’s* son, Luke*, has well and truly discovered ‘the f-word’.

At age 15, it’s very much his means of expressing himself, sometimes 'with a bang or thump of irritation on the wall’.

And while he hasn’t specifically sworn at her, Rhiannon is concerned by how often the word comes out.

’It’s mostly ‘Oh for f-’s sake’. Quite often directed at his little sister: ‘Oh you’re such an effing b_.”

In Melissa’s case, it came out when she was least expecting it, on a shopping trip with her two-year-old.

‘’Calling me ‘an effing f-er’ in the middle of the supermarket once. It was one of those moments when it just boomed across the whole place. Everyone went silent and all you could hear was him swearing.’’

Maeve’s* kids are also young so she’s still contending with 'things like “poo bum”, you know all that potty language.’

It’s not what any of these Mums want to be hearing.

While it was not possible to completely control children's swearing, parents could learn to manage and reduce its use, particularly in the home.

It was partly because swearing was such a trigger for some parents that it had become a great way to get a reaction.

''Kids are going to be exposed to different influences and if you react big time then in a child's mind it becomes an even bigger trump card to pull out when they're angry and they want a reaction.''

Of course, it’s tempting to just ignore it and rise above the provocation. Easier said than done.

Gallagher warned it only worked if parents were genuinely ignoring the swearing rather than just pretending.

''So the clenched teeth are normally a really good clue that you’re actually not ignoring.’’

The more frustrated people got, the harder it was for them to hold it in, Gallagher said.

‘’We don’t tend to be able to sustain that too well and tend to blow up despite our best efforts.”

It was useful for parents to validate the feeling behind the children’s language but they also needed to establish some ground rules for how swearing was to be treated in their homes.

That didn’t mean they could always prevent bad language but they needed a strategy for handling it when it did occur.

Gallagher recommended having a series of options ready to present to children if they began swearing  such as: “I stop listening Sweetheart, when you start swearing,” or “The only place swearing will get you in this house is in your room so it’s completely up to you.”

“So being able to be calm about it. We’re not going ‘Oh my God, you’re swearing!’ but it’s actually being really real about it but saying this isn’t OK.’’

Part of attaining this calm approach was to expect that a child would break the rules and to be ready for the swearing.

“If we set the bar too high that the child should never say anything like that then, when they do, we come in on the back foot. We get a fright and we can overreact.”

Whilst parents were entitled to respond in that way, it was, again, showing children that they had the power to get a reaction.

‘’Sometimes the most powerful thing we can do is actually to emotionally prepare ourselves for it, underreact and just have a consequence we put in place.’’

Part of keeping things calm was also picking which swear word to jump on and which to let slide.

“If I’m yelling into your face, ‘I hate your effing guts’, that’s a very different scenario from storming off to my room and swearing under my breath,’’ Gallagher said.

In the storming-off scenario, the child might actually be complying, even if unhappily with the parent’s rules.

‘’So, to drag them back can mean we’re actually making a bigger deal of it than is required.’’

Rhiannon has learnt to pick her battles.

‘’My son is really bad at it so I try to minimise it here, particularly around grand-parents.’’

However, when her son was out of the house with his friends, she didn't try to control the swearing.

‘’I let them do what they do because you can’t stop it.”

All part of the learning curve

One of the reasons parents reacted strongly to swearing was because it felt like they were being disrespected.

“If we’re under-reacting to the swearing it can feel like the kids are also going to get away with the disrespect.

Yet Gallagher reminded parents that this process was just part of the learning curve for children.

‘’Remember this is about growing a little human being who is learning self-control and that self-control is growing incrementally.’’

There would be many opportunities to tackle these issues with children and parents didn’t need to win every argument. 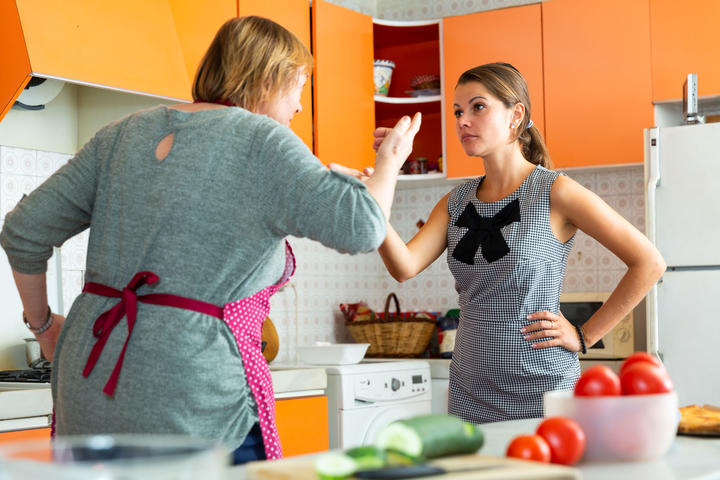 ‘’There’s going to be lots of battles and you don’t need to worry even if you feel you haven’t won this moment. There’s a whole campaign that you can invest in and you’re the commander.”

If parents remained calm and focused on the bigger picture, children would learn these lessons.

‘’Ultimately it’s going to be your child making decisions for themselves around how they want to be with their language.’’

And in fact, when they weren’t trying to get a reaction, children might not be as loose-lipped as their parents feared.

“I’d hazard a guess that most children aren’t swearing in front of their school principals and so you can probably relax a little bit about the forthcoming arrest warrant. They’re able to show self- control in some settings so that’s a good thing.”

But some words or insults were harder to ignore.

“The worst words don’t always start with an ‘f' so 'Go and kill yourself ' or ’I hate you’ can be really hard for parents to hear.”

Gallagher warned it was important not to ignore such comments but parents should also try not to react.

''We want to look at context, timing because again, often even these really, really hard things to hear can be aimed at getting a reaction.

''Not because our kid is manipulating us but because they've actually got a really big feeling and they need you to pay attention to it."

That did not mean that emergency mental health care was called for.

"But what it means is that we are just taking a breath and looking at the meaning behind those comments and checking in with our child, possibly when the dust has settled."

'I'm going to kill myself' was another thing that could be said in anger, Gallagher said and parents should check in with their children.

"But try and not over-react because, if it's said in anger, and there is no other indicators of low mood and changes in behaviour and it's not an issue when they're not angry, just breathe, validate the feeling that might be  behind the statement and monitor the situation.''

Looking in the mirror

Then, of course, sometimes we have to take a good look at ourselves and consider whether our own loose language might be having an impact.

"I might plant the f-bomb on him or something if he's being particularly irritating."

And it's usually once the child's behaviour has escalated in some way. 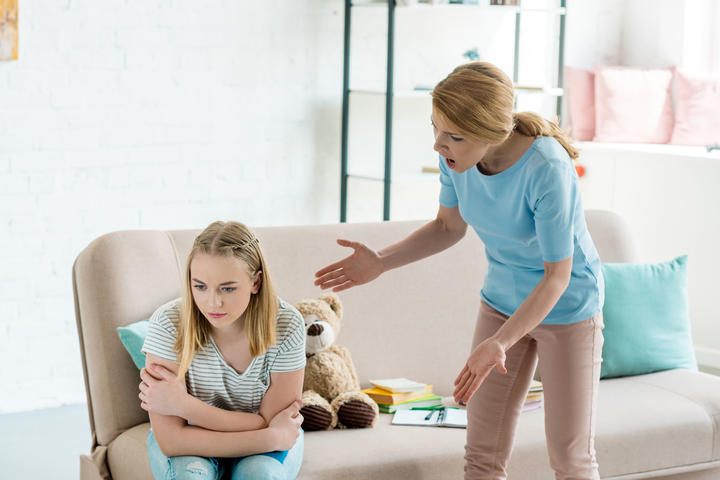 Gallagher agreed that most parents, including herself, had their moments when swearing felt like an instinctive response.

“I'm a swearer so I hope it doesn't sound like I'm sitting on any high moral ground here.''

But she warned it was useful for parents to note when they were swearing.

''If I'm swearing because I've got really angry, I’m probably more concerned about the getting really angry.

"That's the bit actually looking at how I manage my children's behaviour, how I'm calming myself down, am I looking after myself, is a really important part of that.''

If swearing happened in the context of an angry parent it could also be very worrying for a child, Gallagher said.

And she added that parents who swore themselves could hardly expect their children to abstain.

"This is not all about child behaviour change. We've got to kind of look at ourselves and go, 'Well, if I really have a hard time controlling it, I'm going to have to expect to see it in my kids."

Gallagher said it could be useful for parents to instead teach their children about the appropriate use and context of swearing.

''I suspect as an adult you don't necessarily mouth off to your boss. So there will be certain situations where we as adults don't swear either.''

Likewise, parents should help children understand when it might be acceptable to swear.

"So the lesson might be how to swear cleverly or swap out some words or just know the safe spaces to swear."

After all, a few choice words could be very satisfying.

"I certainly know that there are times when expletives serve a purpose."

She believed the occasional swear word was unlikely to cause too much harm.

'But if you don't want it to be a pattern of behaviour then using some of the strategies we've talked about can be really helpful."

Tips to stop children from swearing

-Don’t overreact if your children swear as they will learn to use that to get a reaction.

-Instead, emotionally prepare for the swearing and try to under-react. Then calmly put a consequence in place.

-Set the tone for your home by establishing ground rules for language, e.g. if swearing happens the child will go to their room.

- Pick your battles. Muttered swear words while a child is complying are less concerning than angry swearing to a parent's face.

-Try to understand the intent or feeling behind angry, hurtful language and discuss it with your child.

-Likewise, check in with your child about any self-destructive talk and monitor the situation.

-Be aware of what you are modelling; if you swear, it's likely your children will try it too.

-Think about why you swear yourself. If it is always in anger, you might need some better support yourself.

-Accept that swearing sometimes serves a purpose and teach children how and where they can swear and let off steam appropriately.