Teaching children to do chores

How do we get children to help out around the house without asking them 100 times ? Or do we just give in and end up being a slave to our kids. Katy Gosset looks at whether there's a better way. 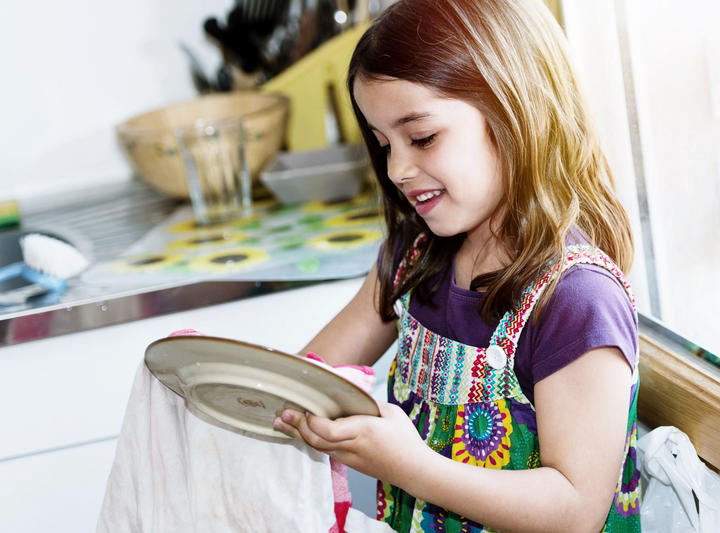 It’s one of the things Sam* finds hardest about parenthood: ‘asking your kids to do things over and over again.’

Cue a collective sigh of sympathy from parents because (let’s face it) we’ve all been there.

But even if it’s an uphill battle most parents stick at it because they believe chores are part of family life.

‘’We’re not their slaves. We expect them to participate in the household,’ Sam said.

All the more so when the family is large, like Alison’s*.

“I do say fairly often that I was not put on this earth to look after six people constantly.”

As a result she has a three week roster, where children alternate filling and emptying the dishwasher, setting and clearing tables and putting out rubbish.

But there can still be resistance.

“Especially if it’s something that’s an outside job, you know you get the whole ‘Oh I don’t want to go outside because it’s cold’.”

So it’s a relief to hear that, despite all the moaning, it’s worth our efforts to persevere.

Clinical psychologist Catherine Gallagher said all young people needed chores and things to be responsible for.

“It’s good for them both in that moment and it also helps them grow into people that can eventually leave home and function with some semblance of independence on their own.”

It also prepared them for the sometimes mundane realities of life.

‘’I think it’s really important because it helps out but it’s also about, how do they actually do some frustrating, boring things because that’s kind of life.”

“It would be kind of weird if they did. Why would I stop doing what I enjoy doing and go and set the table?”

Part of the issue was that children were susceptible to the ‘problem of immediate gratification’ or PIG, she said. “In fact, some adults are still pretty vulnerable to that as well, just saying.”

Children needed help to shift from the immediate gratification of whatever game or activity they had been doing to a new task, she said.

However there were many long-term benefits for those who did.

“You’re going to be teaching self-reliance and how to take responsibility for yourself. If you make a mess then you’re going to pick it up.”

‘You’re teaching team work, time management. You’re reinforcing messages around respect so we’re all contributing to the running of the house, appreciating what Mum and Dad do.”

To pay or not to pay?

It was up to individual families whether children were paid for chores, but the financial reward could also build life skills, Gallagher said.

“So you’re building a work ethic, especially if money’s attached. They actually have some power within their means to do things and get paid and the harder you work the more you earn.”

Many families believed there were other jobs that should be done for free as part of contributing to family life.

Gallagher said while most children would cope with this, for others parents might need to first offer a financial incentive and then gradually withdraw it.

“Some kids might need a little bit of reward to get them going to start with and then you can start petering it out and build other expectations on top of that.”

A good way to get young children underway with chores was by encouraging them to do things they needed for themselves, Gallagher said.

“If the messages are that this is just what you do and it’s what you need then sometimes those natural consequences work quite well.”

“So if it’s getting up and it’s kind of cold then put your clothes on. Or if you want those things in your lunch then you get to make your lunch or if you want me to do that then you have to do this for me first.”

Once chores were identified, routines helped children remember what they had to do. 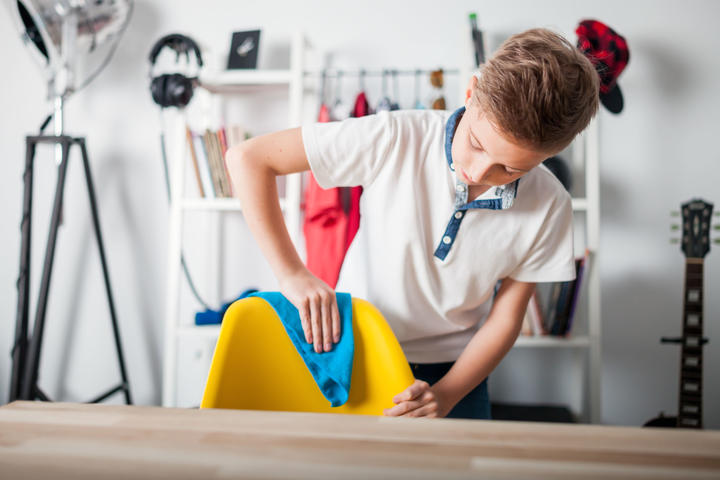 In some cases, if a child failed to do a job properly, parents would have to decide if they could tolerate the consequences.

For example, if a child forgot to put their uniform out to be washed on Friday night.

“And come Monday, if it’s not washed, how many of us are scrabbling round on Sunday night trying to make sure it’s washed or could we actually tolerate the kid going to school and getting in trouble?

“So, having some awareness of what we’re actually willing to follow through on.”

Some of this also came down to a concern about what other parents might think if a child was unkempt or had forgotten something and everyone was susceptible to this, Gallagher included.

“I don’t do this stuff half the time as confidently as I am saying it here on the radio,” she said.

Most parents felt uncomfortable if their child was seen to be lacking in some way.

“It’s really hard when you see your child turning up without the stuff they’re supposed to have because who gets the judgement?

“Yes, your child does but actually we all know it’s the parents’ fault because if they parented properly the child would never have forgotten in the first place. You know, we’ve all been guilty of that haven’t we?

“So there’s an interplay there between the child’s experience and ours which is good for us to be aware of,” Gallagher said.

She warned many people put forward a favourable front but were potentially still grappling with the same issues as other parents.

“The world that people get presented with is not most people’s realities.”

Do children actually know how to do the job?

As a parent it can be pretty tempting to offload a chore to a child and to view any resistance as laziness.

But sometimes parents needed to check the child actually knew what to do, Gallagher said.

“Often we think if the child is being non-compliant, they’re just being naughty, sometimes it’s about that they don’t actually know how to do it and so saying ‘No’ or avoiding it is actually a far easier way to get out of a job.”

Parents assumed that because the child had seen them doing the task before they would know what to do.

“But in fact there’s skills that we actually have to be taught and learn and make mistakes and get feedback on.” 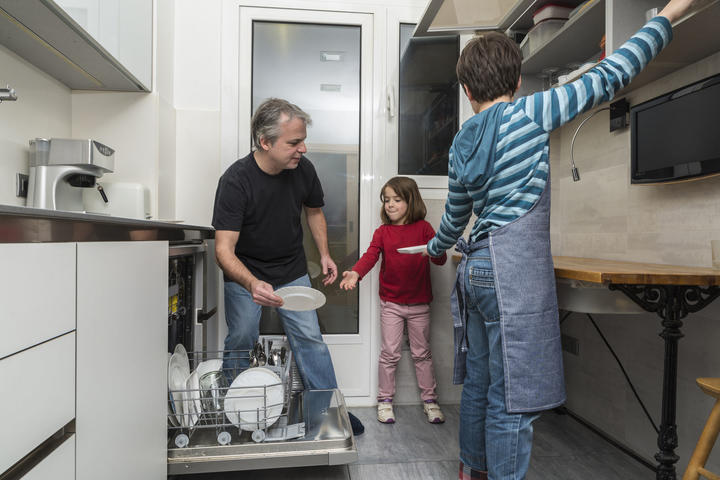 Alison has found that to get buy-in on the chores she’s had to relax her expectations of exactly how the job will be done.

“As far as parental expectations go, I’ve let go of things being perfect. I would rather that they had a go.”

And, while we’re talking about revising expectations, Gallagher warned that every so often parents should take stock of how things were going.

One of the most important parts of parenting was taking the time to reflect.

“So build in moments to reflect on, is this working? Are we expecting too much?”

If things are stressful there’s nothing like a good natter with friends to calm things down. This could act as both a guide but also a relief, Gallagher said.

“The best conversations I always have are with other parents who get it wrong just as much as you do or get it worse!

And that’s not a bad lesson for children either.

“What we’re modelling to kids is that we’re getting this right most of the time but we’re also practising parenting because this is the first time that we’re dealing with this situation, with this child, at this age so trial and error’s required.”

Tips for getting children to do chores.

- Start small with easy jobs they can do for themselves.

- Choose logical things the child will want to do e.g. put on their clothes on a cold morning or pick what to put into their lunch.

- Make the chore part of a routine so it will be easy for the child to remember.

- Make it clear some jobs are for the good of the household.

- Offer money as an initial incentive but reduce or remove the payment over time if you want the job to be part of contributing to family life.

- Take the time to show the child how the chore is done.

- Don’t expect the job to be done perfectly.

- Schedule moments to reflect on how the chore process is going and if you are expecting too much or too little.

- Talk to friends and other parents about their expectations and how they are handling it.

* Not their real names.