Four people have been killed after militants attacked the home of the Afghan defence minister. 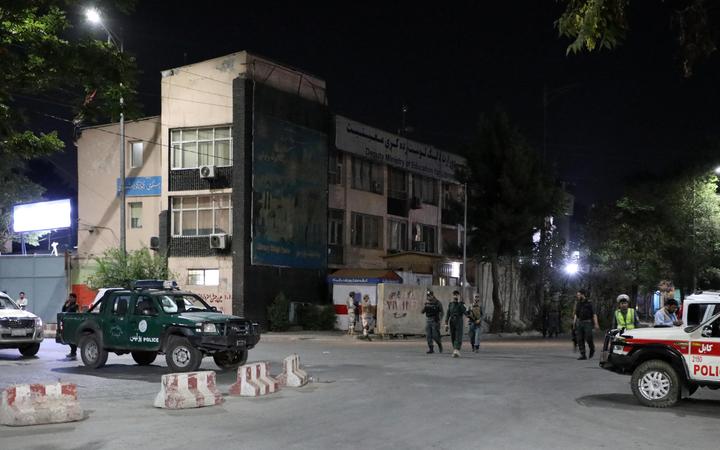 Bismillah Khan Mohammadi was not at home on Tuesday as gunmen detonated a car bomb and fired shots near Kabul's heavily fortified Green Zone.

His family was safely evacuated and the attackers killed.

The attack comes as fighting continues in other key Afghan cities, with the UN Security Council calling for an immediate end to the violence.

Security officials told the AFP news agency that four people had been killed in the attack, while Italian medical charity Emergency confirmed that 11 people who had been wounded had been brought to its facilities in Kabul, along with the bodies of four people who died.

"Do not worry, everything is fine!" Mohammadi tweeted after the attack.

The US State Department said the attack bore "all the hallmarks" of a Taliban attack.

Hours after the attack, crowds of Kabul residents took to the streets and rooftops on Tuesday evening to shout Allahu Akbar (God is greatest) in defiance of Taliban attacks, with videos shared on social media.

Similar scenes were recorded on Monday in the city of Herat, which has also seen heavy fighting in recent days.

What's happening elsewhere in the country?

Fierce fighting between militants and government forces has continued in the city in Helmand province in southern Afghanistan, with the UN saying on Tuesday that at least 40 civilians had been killed in Lashkar Gah in the past day.

"There are corpses on the roads. We do not know if they are civilians or the Taliban," one resident, who is not being named for security reasons, told the BBC Afghan service in an interview on Whatsapp. "Dozens of families have fled their homes and settled near the Helmand river."

Other terrified locals told the BBC they had seen bodies lying in the streets.

The Afghan army urged civilians to leave the city ahead of a major offensive against the Taliban, the hardline Islamist group that was driven from power by US-led forces 20 years ago. Fighting has been continuing in the city for days, with the militants now reportedly in control of most districts.

The United Nations and other agencies are warning of a worsening humanitarian crisis.

Capturing Lashkar Gah, the besieged capital of Helmand province, would be of huge symbolic value to the insurgents as they continue their rapid advance after the pullout of foreign forces. Helmand was the centrepiece of the US and British military campaign.

At the weekend, Attaullah Afghan, the head of Helmand provincial council, admitted that fighting seemed to be "getting out of our control".

The Taliban have made further advances this week, despite Afghan and US warplanes targeting the insurgents.

There are reports that Taliban fighters have taken positions inside homes, shops and the bazaar - people are trapped in their homes while fighting goes on in the streets.

The militants generally warn people via loudspeaker to leave but sometimes they enter houses - locals have just minutes to flee or risk being caught in crossfire as their homes become part of the battlefield.

Elsewhere in the south, Taliban are trying to capture Kandahar, their former stronghold, and clashes have also intensified in the western city of Herat.