Haiti bid a rowdy farewell to assassinated president Jovenel Moïse on Friday as his funeral was roiled by nearby gunfire and protests, prompting a high-level US delegation to leave abruptly and other dignitaries to duck into vehicles for safety. 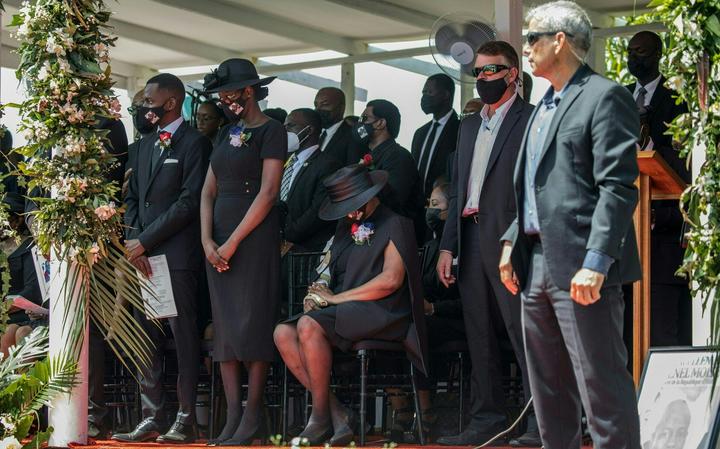 The state funeral in the northern city of Cap-Haitien was intended to foster national unity, but the unrest reflected deep divisions over the 7 July atrocity, in which suspected foreign gunmen walked apparently unchallenged into the Moïses'' residence and shot the president multiple times, also injuring his wife.

Acrid smoke from piles of burning tyres and gutted cars blocking roads outside the compound where the ceremony was held billowed into the service, depositing black ash onto mourners.

"You lost one battle, but the war is not over. We must find justice for you," his widow Martine Moïse told funeral mourners in Haitian Creole, her face nearly hidden under a wide-brimmed black hat and her right arm in a sling after the attack.

Few answers have emerged about who planned the killing, or why.

There were no immediate reports of injuries among protesters or mourners at the funeral. Reuters witnesses smelled gas and heard detonations like gunshots outside the site of the service. 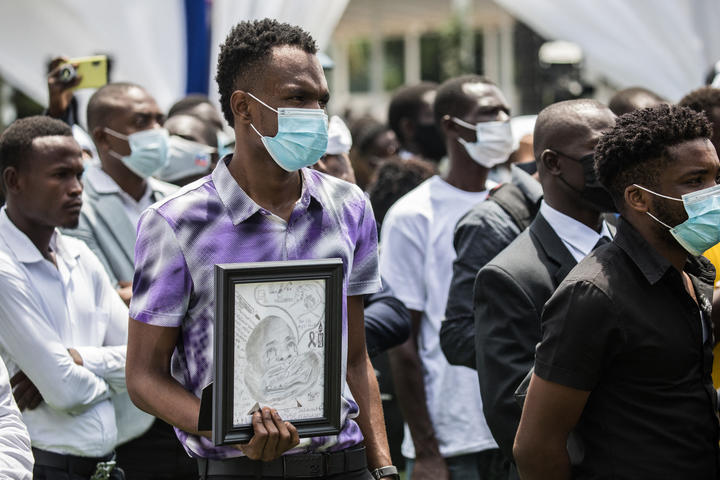 Guests listening to the service, which was cut short by unrest. Photo: AFP

Local media reported a nearby home furnishing store was looted during the disturbances. Lines of people could be seen nearby carrying washing machines and other domestic appliances as the last mourners were exiting the compound.

The US delegation filed out of the makeshift arena hosting the service less than an hour after entering. During the service, dozens of armed security personnel formed protective cordons around officials in the stands.

Those travelling from Washington had returned safely to the United States, National Security Advisor Jake Sullivan said in a statement later on Friday.

"The United States remains deeply concerned about the situation on the ground in Haiti," Sullivan said. "We strongly urge all parties to express themselves peacefully, and call on Haiti's leaders to be clear that their supporters must refrain from violence."

US President Joe Biden's ambassador to the United Nations, Linda Thomas-Greenfield, led the American delegation. Earlier, in remarks made as the delegation arrived in Cap-Haitien, she called on Haiti's new Prime Minister Ariel Henry to create conditions for legislative and presidential elections "as soon as feasible."

The Haitian people deserve democracy, stability, security, and prosperity, and we stand with them in this time of crisis. We urge everyone to express themselves peacefully and refrain from violence.

Punctuated by declamations from supporters who accused authorities of responsibility for Moïse's death, the service played out in an atmosphere of tension, and the organisers brought the program to a close nearly an hour ahead of schedule.

Angry shouts were sometimes drowned out by loud swells of sombre devotional music played on loudspeakers.

Wrought with emotion, Moïse's immediate family eulogised the late president as a champion of the poor who had dared to challenge Haiti's dominant political and economic elites.

Arguing the system was stacked against him, Martine Moïse said his efforts to build a fairer Haiti had been thwarted by business interests that critics see as a de facto oligarchy.

His wife stayed with his coffin for more than an hour after it was carried to a canopied mausoleum, laid in a concrete tomb about three meters deep, then covered by iron bars, and sealed with planks of wood, cement and large rocks.

The tomb stood near a mausoleum to Moïse's father, who died last year. 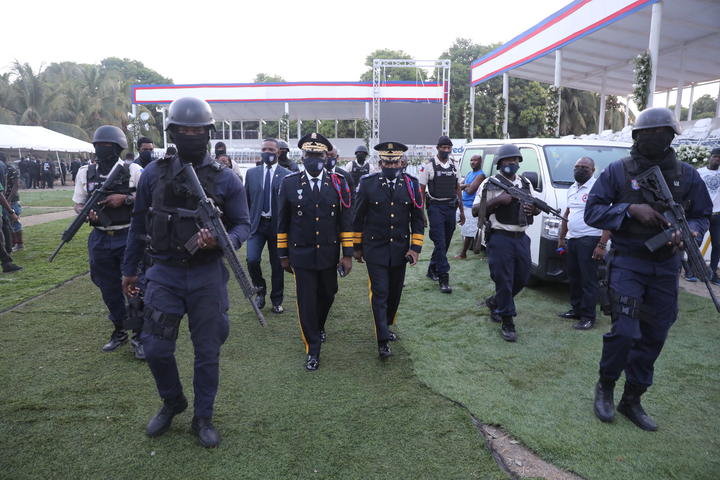 "Why do you have all this security, where were the police on the day of the president's assassination?" one protester said.

The demonstrations by Moïse's supporters have convulsed Cap-Haitien, his hometown, for three days. Protesters have vented anger over the many questions that remain unanswered about the brazen assassination, including who planned it and why.

Some saw in the assassination the continuing hand of foreign powers in the poorest country in the Western Hemisphere, which was the first state in Latin America and the Caribbean to become independent from Europe at the start of the 19th century.

Haitian officials say the attacked was carried out by a group that included 26 Colombian former soldiers, at least six of whom had previously received U.S. military training. Haitian Americans were also among the accused.

The mercenaries were disguised as U.S. Drug Enforcement Administration agents, which helped them enter Moïse's home and bypass his security detail, authorities have said. One of the Haitian Americans had been a DEA informant, they said.

The turmoil has pushed Haiti up Biden's foreign policy priorities and on Thursday the U.S. State Department named a special envoy for the country. But Biden has rebuffed a request by Haiti's interim leaders to send troops.

Moïse himself faced major protests. A Senate audit accused him of involvement in embezzling more than $2 billion of Venezuelan aid, which he denied. He angered opponents by ruling by decree and tabling legislation to expand presidential power.

Gang violence surged on his watch and the economy struggled. But support appeared strong in his hometown. Banners celebrating Moïse festooned buildings along the narrow streets of Cap-Haitien's old town, with proclamations in Creole including "They killed the body, but the dream will never die."