Haiti has asked for foreign troops to be sent to the country to protect key infrastructure after the assassination of President Jovenel Moïse. 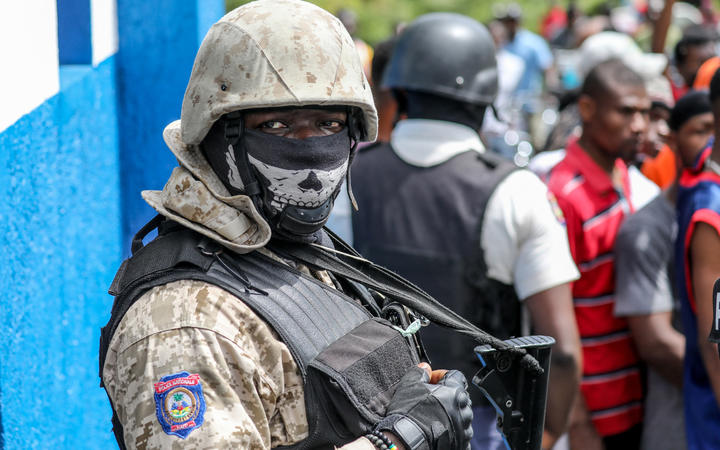 Police look on as a crowd surrounds the Petionville Police station. Photo: AFP or licensors

The request was sent by the government to the US and the UN, but the US says it has no plans to offer military assistance "at this time".

After a gun battle in the capital Port-au-Prince, 17 of them were detained.

Some of the group, which Haiti says included retired Colombian soldiers, were held at the house they were using, others after entering Taiwan's diplomatic compound, the police said.

Three suspects were killed by police, and eight others are still being sought.

Although the US will not offer troops, it said today it was sending FBI and Department of Homeland Security officials to Haiti to help in the investigation.

The UN Security Council would have to approve any plan to send international troops to Haiti under UN auspices.

The killing has triggered some civil unrest in Haiti, the poorest nation in the Americas. A state of emergency remains in force across the country and it is unclear who is in effective charge of the country's government. 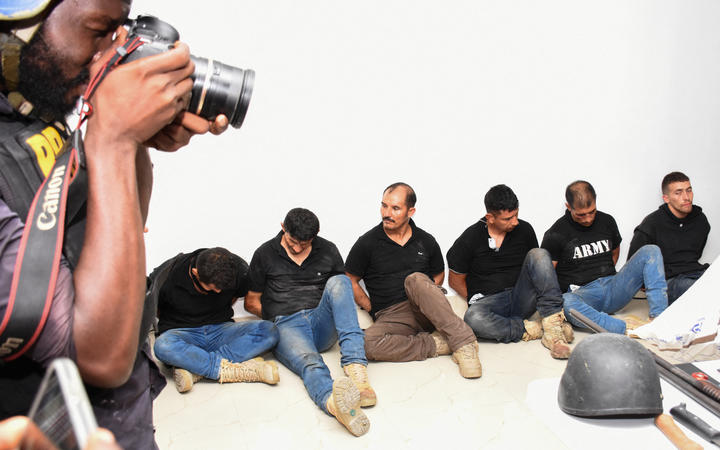 Suspects in the assassination of Haitian president Jovenel Moise are presented to the media by Hatian authorities in Port-au-Prince. Photo: AFP or licensors

Bloodied and bruised, arrested suspects were shown to the media on Thursday, along with a slew of seized weapons.

It is still unclear who organised the attack and what the motive was.

The attack took place in the early hours on 7 July, when gunmen broke into the president's home, shooting him dead and wounding his wife. Moïse, 53, was found lying on his back with 12 bullet wounds and a gouged eye, according to the authorities.

Martine Moïse, 47, was seriously wounded and is in a stable condition after being flown to Florida for treatment.

Found in the suspects' possession were firearms, sets of US dollar bills, the president's personal chequebook and the server that held surveillance camera footage from his home, Le Nouvelliste newspaper reported.

Taiwan confirmed 11 of the suspects were arrested after breaking into a courtyard at its compound.

Angry civilians had joined the search for the gunmen, and helped police track down some who were hiding in bushes. The crowd set fire to three of the suspects' cars and destroyed evidence.

Police chief Léon Charles called for calm, saying the public should not take the law into their own hands. 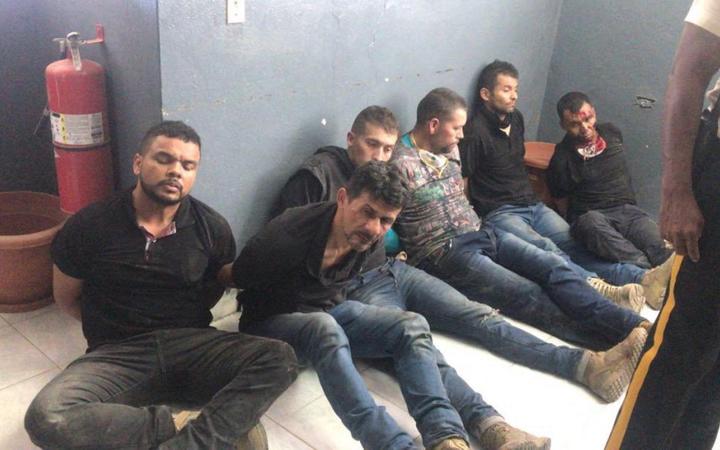 "Foreigners came to our country to kill the president," Charles said, as the suspects sat on the floor behind him in handcuffs.

Colombia's government has pledged to assist Haiti with its investigation efforts.

The US state department, meanwhile, said it could not confirm if any of its citizens had been detained.

However, US and Canadian media are reporting that one of the dual citizens arrested, James Solages, 35, is from Florida and was a former bodyguard at the Canadian embassy in Haiti.

An investigating judge told local media that Solages and the other US citizen, named as Joseph Vincent, had said they were there as translators for the mercenaries.

"The mission was to arrest President Jovenel Moïse... and not to kill him," Judge Clément Noël told Le Nouvelliste.

Colombian daily El Tiempo said it had seen confidential documents that named the Colombian suspects. The paper's research suggests that four of them flew from Colombia to the Dominican Republic on 4 June.

They crossed by land from there into Haiti two days later. The two countries share the island of Hispaniola.

According to El Tiempo, Colombian intelligence has seen photos posted on social media by members of the group, showing them posing at a popular tourist spot in the Dominican Republic. 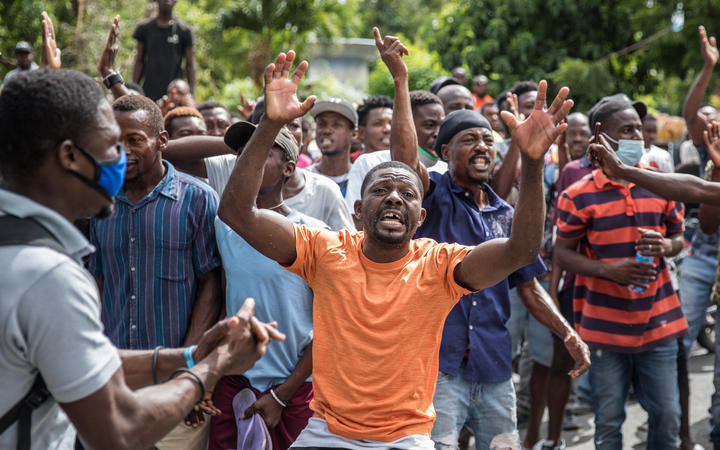 The crowd reacts near the Petionville Police station where armed men, accused of being involved in the assassination of President Jovenel Moise, are being detained in Port au Prince. Photo: AFP or licensors

Who is in charge of Haiti?

The constitution says the National Assembly should choose another president. But disputes meant that elections scheduled for October 2019 did not take place - and Moïse had been ruling by decree amid widespread protests.

Amendments to the constitution - not accepted by everyone - suggest the prime minister should be the next one to take over.

But Haiti has both an interim prime minister, Claude Joseph, and a new appointee, Ariel Henry, who has yet to be sworn in.

Both are claiming to be in charge.

Today, a group of political parties signed a resolution proclaiming a new president - Joseph Lambert - with Henry acting as his prime minister.

The situation is doing little to resolve the political and economic instability that has long plagued the nation.