The US space agency's Perseverance rover is getting ready to take its first sample of Mars rock. 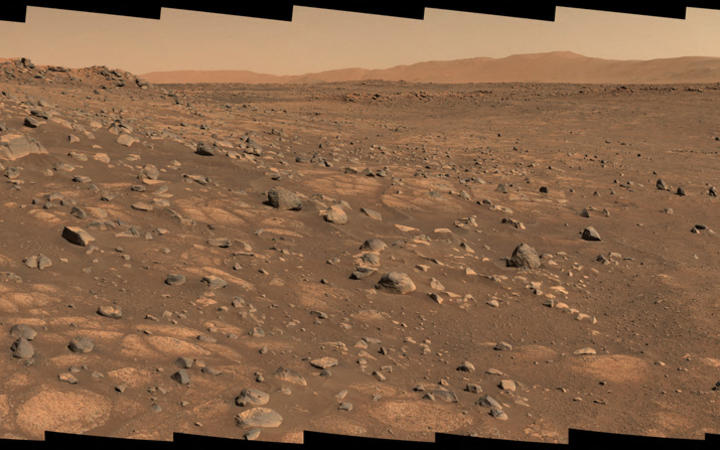 This Nasa photo taken 8 July 2021 shows the 'Cratered Floor Fractured Rough' geologic unit at Jezero Crater. A light-colored, paver stone, like the ones seen in this mosaic image, will be the likely target for first sampling by the Perseverance rover. Photo: AFP / Nasa / JPL-Caltech

The core, about the size of a finger, will be packaged in a sealed tube for eventual return to Earth.

Scientists say their best chance of determining whether Mars ever hosted life is to study its surface materials in sophisticated home laboratories.

Perseverance landed on the Red Planet in February, in a 45km-wide crater called Jezero.

Satellite images indicate this deep depression once held a lake, fed by a deltaic river.

As such, it is considered a great candidate for the preservation of ancient microbial organisms - if they ever existed.

The Nasa robot has driven about 1km (3000ft) south from where it uched down in dramatic fashion five months ago.

It is now stopped at a location that has been dubbed the "Paver Stones", or "Fractured Rough".

This is a collection of pale-coloured rocks that the mission team believes represents the base, or floor, of Jezero.

Up ahead: the target spot where I plan to collect my first-ever sample of Martian rock. I have everything I need with me to get the job done. First is to collect detailed, close-up science of the rock, then comes the coring.

Scientists want to determine whether these Paver Stones are sedimentary or volcanic in origin.

Either was interesting, but the special quality of volcanic rocks was that they could be dated with very high precision and accuracy in a lab, chief scientist Ken Farley said.

"That would really pin down the timing of many of the things we are looking at on Mars," he told reporters.

Perseverance will first abrade the surface of a chosen section of Paver Stone, to remove Mars' obscuring dust, and then examine the site with its powerful instruments.

These are held on the end of its robotic arm. They are capable of determining the chemical composition, the mineralogy and texture within a rock - to identify it definitively.

Finally, in early August, the robot will secure a drilled core.

The rover will be caching something like 40 of these small sample tubes over the course of its mission. Later projects from Nasa and the European Space Agency (ESA) will arrive on Mars to take ownership and bring them home.

Farley said he expected four unique samples to be cached in the area of the crater now being investigated.

This includes an enticing outcrop of rock, called Artuby. This is some 600m away and looks to contain some very finely layered sediments, potentially deposited by the lake and river delta system that once occupied Jezero.

"This is exactly the kind of rock that we are most interested in investigating for looking for potential bio-signatures in this ancient rock record," the California Institute of Technology researcher said.

Nasa is delighted with the way Perseverance is performing.

A particular success has been its mode of driving, which now achieves a high level of autonomy.

Whereas past vehicles needed a lot of direction from controllers back on Earth, or could self-navigate only slowly, Perseverance can image the terrain ahead at speed and plot a route with great efficiency.

The robot can do this for drives of 100m or more, dodging tricky obstacles, such as large boulders or fissures in the ground, along the way.

The rover is being helped by the reconnaissance conducted through the mini-helicopter it brought to Mars.

Called Ingenuity, this little chopper has been flying ahead of Perseverance to survey the terrain.

"It broke all of our records. The duration was two minutes and 46 seconds, the velocity was 5m/s, and we quadrupled the distance that we had ever flown, and we flew about 625m."