An organisation of top Indian doctors has warned that a third wave of Covid-19 is inevitable as travel restrictions ease across the country. 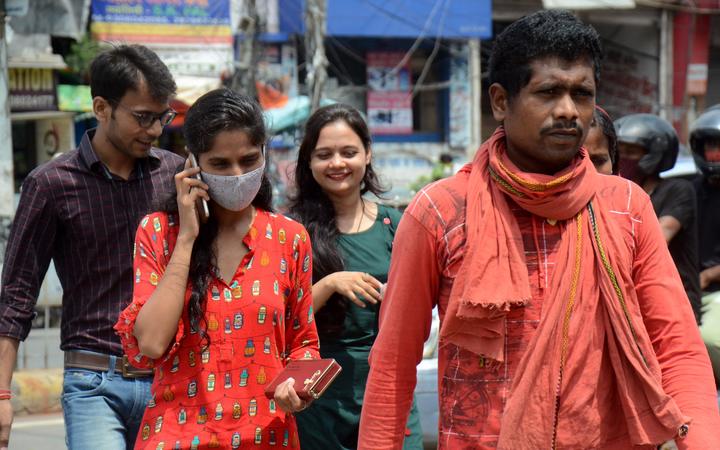 People out and anout in Patna, India, on 9 July 2021. Photo: The Times of India / Rahul Sharma via AFP

Photos and videos of tourists flocking to popular destinations have gone viral in recent days.

Videos show that most of them are not wearing masks or maintaining social distancing in public places.

The drop in numbers has largely been attributed to strict lockdowns by states which are now being eased.

But even as cases are declining, experts worry India could be at the risk of a potential third wave of infections as just over 6 percent of the eligible population has been fully vaccinated and around 22 percent have received at least one dose.

The Indian Medical Association (IMA), an organisation that represents doctors in India, on Monday said it was "painful to note that both the government and public are complacent and are holding mass gatherings without following Covid protocols".

"Tourist bonanza, pilgrimage travel, religious fervour are all needed, but can wait for few more months," the IMA said.

It added that opening up these destinations and letting unvaccinated people congregate in these large gatherings are "potential super spreaders for the Covid third wave".

As India emerges out of a deadly second wave - that saw overwhelmed hospitals and crematoriums overflowing with the dead - several states have opened up to allow tourists and religious gatherings.

But experts worry about the repercussions of these gatherings.

In April, millions gathered in the Himalayan town of Haridwar to participate in the Kumbh Mela festival even as several cities grappled with a severe shortage of oxygen and hospital beds. Several of the returnees - who came from all parts of the country - tested positive in the following days.

Now, authorities in Uttar Pradesh state are gearing up to hold the annual Kanwar Yatra festival from 25 July. Experts say that India needs to enforce safety protocols strictly and further speed up the pace of vaccination to avoid a third wave.

India is vaccinating around four million people every day, but it needs to reach eight to nine million per day to reach its target of vaccinating everyone above the age of 18 by the end of this year.

Some states are also grappling with shortages. On Tuesday, several public vaccine centres in Delhi were closed after they ran out of jabs.