An Indian leader has warned the deadly Covid-19 wave sweeping the country needs to be brought under control, before it devastates India and threatens the rest of the world. 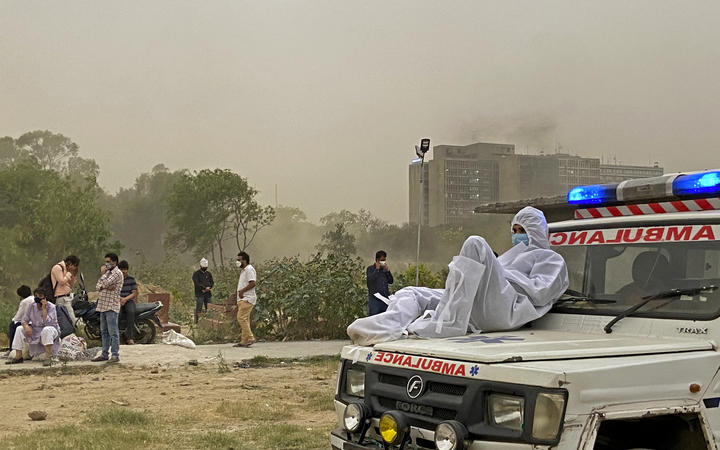 A driver waits on an ambulance for the body of a Covid-19 victim to be taken for burial at a graveyard in New Delhi. Photo: AFP or licensors

In a letter, India's main opposition leader Rahul Gandhi implored Prime Minister Narendra Modi to prepare for another national lockdown, accelerate a countrywide vaccination programme, and scientifically track the virus and its mutations.

Yesterday, Gandhi said the world's second-most populous nation had a responsibility in "a globalised and interconnected world" to stop the "explosive" growth of Covid-19 within its borders.

"India is home to one out of every six human beings on the planet. The pandemic has demonstrated that our size, genetic diversity and complexity make India fertile ground for the virus to rapidly mutate, transforming itself into a more contagious and more dangerous form," wrote Gandhi.

"Allowing the uncontrollable spread of the virus in our country will be devastating not only for our people but also for the rest of the world."

India's highly infectious Covid-19 variant B.1.617 has already spread to other countries, and many nations have moved to cut or restrict movements from India.

British Prime Minister Boris Johnson said yesterday the government needed to carefully handle the emergence of new coronavirus strains in India that have started to spread in the United Kingdom.

Tonnes of medical equipment from abroad have starting arriving in Delhi hospitals, in what could ease the pressure on an overburdened system.

In the past week, India has reported an extra 1.5 million new infections and record daily death tolls. Since the start of the pandemic, it has reported 21.49 million cases and 234,083 deaths. It currently has 3.6 million active cases.

Modi has been widely criticised for not acting sooner to suppress the second wave of Covid-19, after religious festivals and political rallies drew tens of thousands of people in recent weeks and became 'super spreader' events.

His government - which imposed a strict lockdown in March 2020 - has also been criticised for lifting social restrictions too soon following the first wave and for delays in the country's vaccination programme.

The government has been reluctant to impose a second lockdown for fear of economic damage, though many states have announced their own restrictions.

Goa, a tourism hotspot on the west coast where up to half the people tested in recent weeks for coronavirus have been positive, announced strict curbs from tomorrow, restricting timings for grocery shops, forbidding unnecessary travel and urging citizens to cancel all gatherings.

While India is the world's biggest vaccine maker, it is also struggling to produce and distribute enough doses to stem the wave of Covid-19.

Although the country has administered at least 157m vaccine doses, its rate of inoculation has fallen sharply in recent days.

India vaccinated 2.3 million people on Thursday, the most this month but still far short of what is required to curb the spread of the virus.

Medical experts said the real extent of Covid-19 was likely to be far higher than official tallies.

India's healthcare system is crumbling under the weight of patients, with hospitals running out of beds and medical oxygen. Morgues and crematoriums cannot handle the number of dead and makeshift funeral pyres burn in parks and car parks. 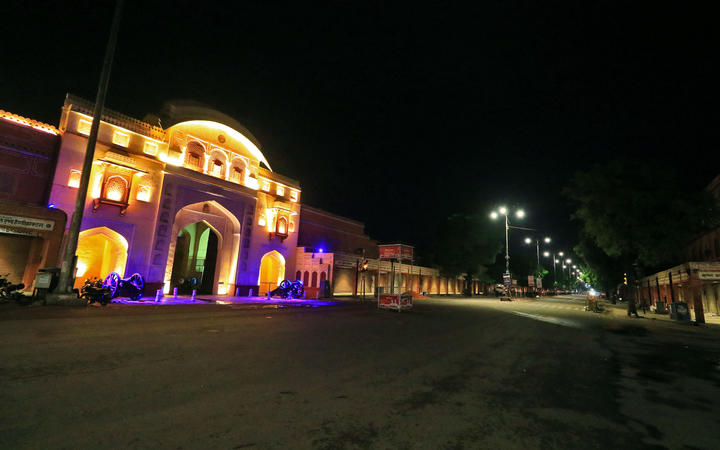 The streets of Jaipur in Rajasthan, India, wear a deserted look during weekend curfew, amid a surge in Covid-19 cases across the country. Photo: Vishal Bhatnagar/NurPhoto/ AFP

Infections are now spreading from overcrowded cities to remote rural villages that are home to nearly 70 percent of the 1.3 billion population.

Although northern and western areas of India bear the brunt of the disease, the south seems to be turning into the new epicentre.

In the southern city of Chennai, only one in a hundred oxygen-supported beds and two in a hundred beds in intensive care units (ICUs) were vacant on Thursday, from a vacancy rate of more than 20 percent two weeks ago, government data showed.

In India's tech capital Bengaluru, also in the south, only 23 of the 590 beds in ICUs were vacant.

The test-positivity rate - the percentage of people tested who are found to have the disease - in the city of 12.5 million has tripled to almost 39 percent as of Wednesday, from about 13 percent two weeks ago, data showed.

Syed Tousif Masood, a volunteer with a Covid-19 resource group in Bengaluru called Project Smile Trust, said the group's helpline was receiving an average 5,000 requests a day for hospital beds and oxygen, compared with 50 to 100 calls a month ago.

"The experts say we have not yet hit the peak," he said.

"If this is not the peak, then I don't know what will happen at the real peak."