Police in Bangladesh have arrested the owner of a factory where at least 52 people died in a fire late on Thursday. 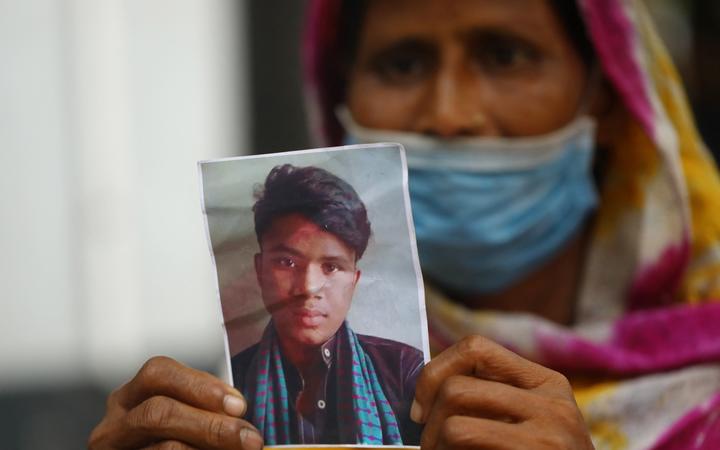 A mother, Jamena, shows a photo of her missing son Naim, 17, at Dhaka Medical College Hospital, she fears he died in the Hashem Foods fire in the outskirts of Dhaka. Photo: AFP

Abul Hashem, the owner of Hashem Foods, and four of his sons were among eight people detained on Saturday. Police say they all face murder charges.

Authorities said many of those who died were trapped inside the building because a main exit was locked.

Children were among the victims and a separate inquiry into the use of child labour has been launched.

Bangladesh labour minister Monnujan Sufian told AFP news agency that she had been to a hospital and spoken to survivors as young as 14.

"If child labour is proved, we will take action against the owner and the inspectors," she said. 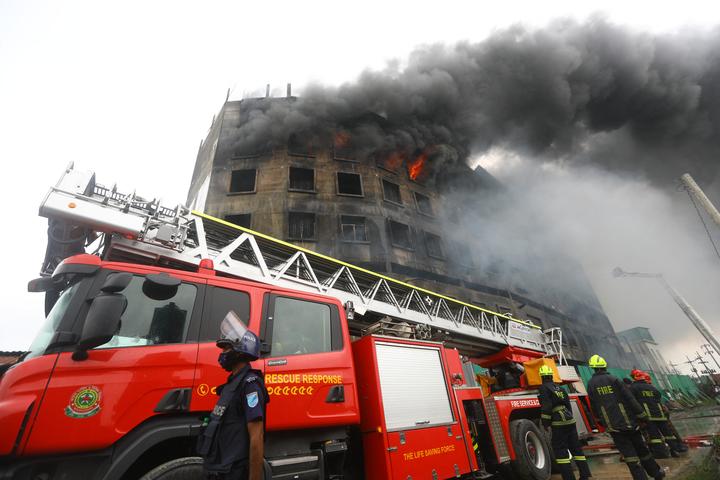 Hashem Foods is a unit of the multinational Sajeeb Group of which Abul Hashem is chairman and managing director. Also arrested on Saturday was the group's chief executive officer, Shahan Shah Azad, and other senior officials, the Dhaka Tribune reported.

Prior to his arrest, Hashem told Bangladeshi media that "workers' carelessness" such as a discarded cigarette could have started the fire.

The blaze broke out on Thursday night on the ground floor of the six-storey factory in Rupganj, an industrial town near the capital, Dhaka. Emergency crews said most of the victims had been trapped on the third floor.

Fire official Abdullah Al Arefin said each floor was accessible by two stairways which some workers could not reach because the blaze had cut them off.

He said some people managed to escape to the roof via the stairs and were rescued, but others could not because a door leading to the roof was locked. He said many of those trapped had jumped from windows to escape the flames.

The fire, fuelled by chemicals and plastics stored inside the building, burned for nearly 24 hours before it was put out.

More than 50 people were injured and worried families have been gathering at hospitals to look for their missing loved ones.

Laizu Begum said her 11-year-old nephew was among those unaccounted for.

"We heard the door of the floor where my nephew worked was padlocked. Then we realised, after seeing how big the fire was, that he is probably dead," she said.

Worried father Chandu Mia was at the hospital with a photograph of his 15-year-old daughter. "I am not sure if she is alive," he said.

Survivors and families told AFP that child workers at the factory were being paid 20 taka (NZ 34 cents) per hour.

Bilal Hossain said he had been to the hospital morgue to claim the remains of his 14-year-old daughter Mitu Akter.

"I sent my baby girl to die. How will I tell her mother?," he said, adding that the factory even owed his daughter back wages.

Safety reforms were promised after the Rana Plaza disaster in 2013 when a nine-storey building collapsed killing more than 1100 people. At least 70 people also died in 2019 when fire ripped through apartments in Dhaka where chemicals were illegally stored.