At least 19 people have been killed in a huge blaze in a high-rise building in an upmarket commercial area of the Bangladeshi capital, Dhaka. 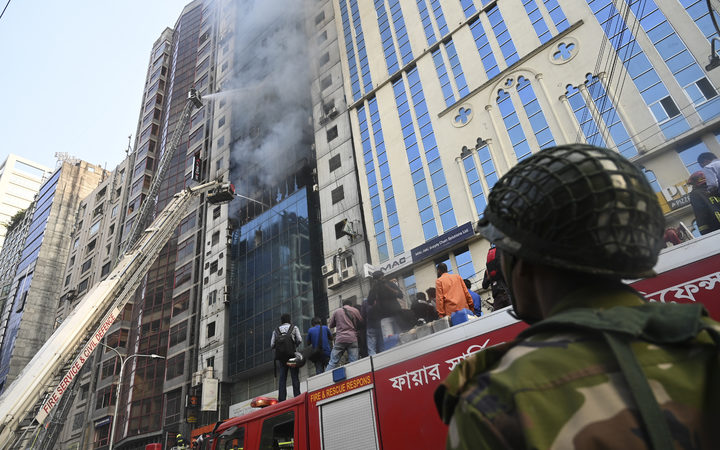 A Bangladehi Army stnad guard as Bangladeshi firefighters on ladders work to extinguish a blaze in Dhaka. Photo: AFP

Seventy people have been injured, a spokesman for the local fire brigade has told the BBC.

Firefighters have now entered the building after the fire was brought under control.

The death toll may rise further, as dozens are feared trapped inside the 19-storey office block in Banani.

They are believed to have been in the upper floors of the building, above where the fire broke out.

Local media said people were seen shouting for help from windows and at least six people jumped out of the burning building.

Fire crews, backed by members of the navy and air force, were called to the scene to tackle the blaze. Dozens of people have been rescued.

Air force helicopters were seen rescuing people from the rooftop.

Helicopters also dropped water on the burning building from above while hundreds of panicked relatives and friends gathered outside the building.

Large fires are relatively common in Bangladesh, owing to lax safety regulations and poor building conditions. Hundreds of people have been killed in recent years.

That same month, a fire in a slum in the coastal city of Chittagong killed at least nine people.

Dhaka, with a population of more than 18 million, is one of the world's most densely populated cities. Some 3.5 million of its people live in slums, according to the World Bank.