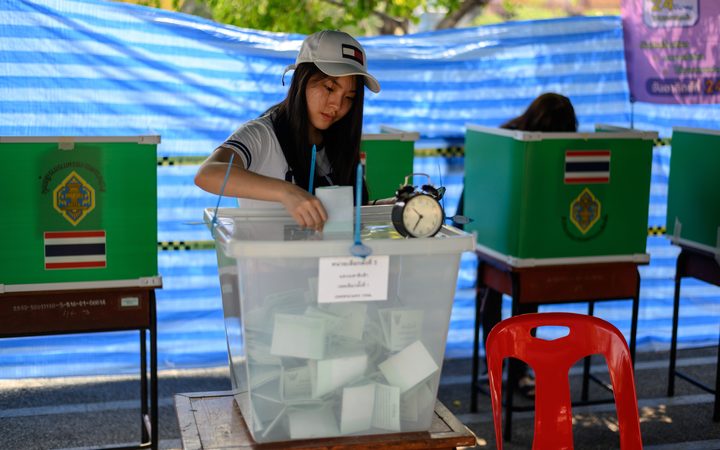 A woman casts her ballot at a polling station in Bangkok on March 24, 2019, during Thailand's general election. Photo: AFP

However, the Elections Commission's announcement does not make clear the overall winner of Sunday's general election, the first since a 2014 military coup.

Both the pro-army Palang Pracharat and an anti-junta "democratic front" have claimed a mandate to form the next government but it is unclear if either side will be able to gather enough votes in parliament to form a workable government.

The main opposition Pheu Thai Party, whose elected government was toppled in the coup, got 7.9 million votes.

"These numbers are fully-counted results officially reported by each constituency," said Krit Urwongse, deputy secretary-general of the Election Commission.

The results represented 100 percent of the ballots counted but would remain unofficial until final results are announced on 9 May.

The numbers were for the nationwide popular vote. Breakdowns of the parties' shares of the vote in each of the 350 constituencies were also released.

The commission has not announced the full number of seats for each party in the 500-seat House of Representatives.

Results for the lower house's 350 directly elected "constituent seats" showed Pheu Thai with 137 and the Palang Pracharat with 97.

The remaining 150 House of Representatives seats are allocated according to a complex formula involving the total number of votes for each party.

The vote numbers released on Thursday should allow a clearer view of how the 150 party seats will be divided. The commission itself has said it would not to announce the party seats until 9 May, when the official results are finalised.

On Wednesday, the Pheu Thai-led "democratic front" of seven parties claimed to have a combined 255 seats based on partial results, saying the majority in the House of Representatives gave it the right to try to form a government.

Pheu Thai is made up of loyalists of a former prime minister, Thaksin Shinawatra, who was ousted in a 2006 coup and has lived in self-exile since 2008 to avoid a graft conviction he said was politically motivated.

A government that had been led by his sister, Yingluck Shinawatra, was overthrown in the 2014 coup.

Palang Pracharat, which campaigned on keeping on coup leader Prayuth Chan-ocha as elected prime minister, said it had the popular mandate because it had won the most votes nationwide.

It said it was in no hurry to form a coalition as official results will not be released until May 9.

"The number of seats we have still hasn't reached 250, and it decreased after the results," party secretary-general Sonthirat Sontijirawong told reporters.

"We still have time."

Leaders of the armed forces told a news conference they were happy with how the election went.

They said they supported governance by "good people", echoing a statement issued by the palace on the eve of the election.

The royalist-military establishment has been at odds with former telecommunications tycoon Thaskin for years, seeing his vote-winning, populist policies as a threat to traditional ways.