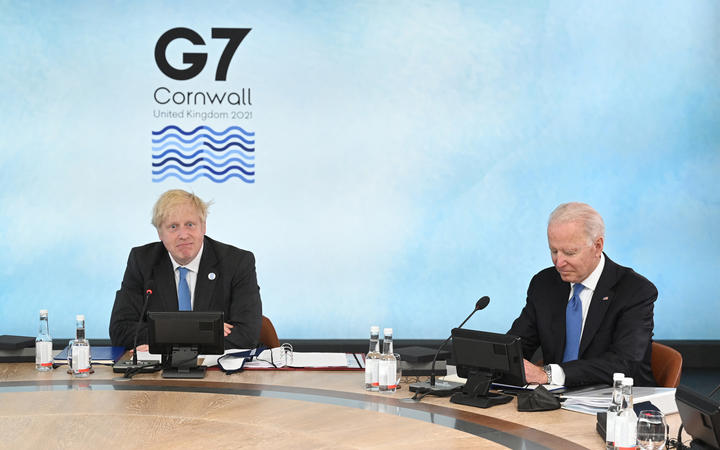 UK Prime Minister Boris Johnson and US President Joe Biden sit around the table at the start of the G7 summit in Cornwall, England. Photo: AFP

The G7 nations have agreed to step up action on climate change and renewed a pledge to raise $US100bn a year to help poor countries cut emissions.

After a summit in Britain, G7 leaders also promised to help developing countries move away from coal.

UK Prime Minister Boris Johnson, who hosted the three-day meeting, said on Sunday: "We were clear this weekend that action needs to start with us."

However some environmental groups said the promises lacked detail.

Developed countries agreed in 2009 to contribute $US100bn a year in climate finance to poorer countries by 2020. But the target was not met, in part because of the Covid-19 pandemic.

While the G7 agreed to raise contributions to meet the target, Teresa Anderson, from Action Aid said: "The G7's reaffirmation of the previous $100 billion a year target doesn't come close to addressing the urgency and scale of the crisis."

Catherine Pettengell, director at Climate Action Network, told Reuters news agency: "We had hoped that the leaders of the world's richest nations would come away from this week having put their money their mouth is."

Climate change has been one of the key themes at the summit in Carbis Bay, Cornwall. The G7 - which include the UK, US, Canada, Japan, France, Germany and Italy - committed to keeping the projected global temperature rise to 1.5C. 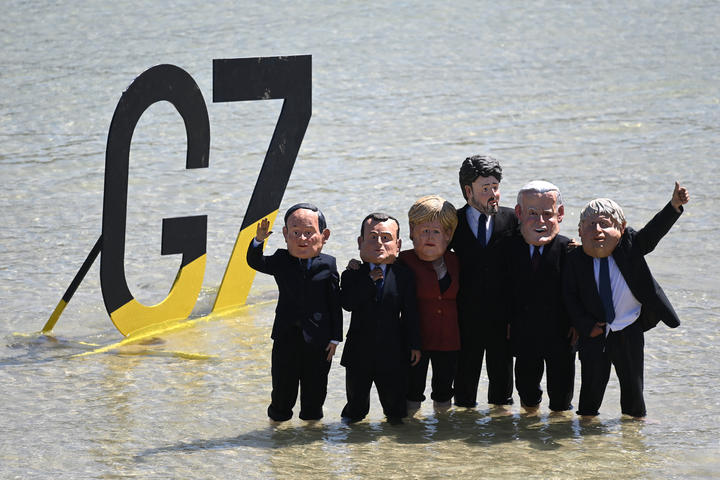 Extinction Rebellion environmental activists with masks of G7 leaders protest on the beach in St Ives, Cornwall during the G7 summit on 13 June, 2021. Photo: AFP

In the final statement they said: "We reaffirm the collective developed countries goal to jointly mobilise $100bn/year from public and private sources, through to 2025."

The commitment to help nations move away from coal power, which initially came from the White House, includes a plan to phase out coal burning unless it includes carbon capture technology.

The G7 will end the funding of new coal generation in developing countries and offer up to $US2.8bn to stop using the fuel.

Coal is the world's dirtiest major fuel and ending its use is seen as a major step by environmentalists, but they also want guarantees rich countries will deliver on previous promises to help poorer nations cope with climate change.

In a separate announcement, the UK joined Germany and the US to declare it would spend hundreds of millions of pounds protecting the world's vulnerable communities from climate change.

What is in the G7 communique?

The G7 leaders published a 25-page communique summing up their "shared agenda" in key points. They included:

Coronavirus: The headline pledge was to provide an extra one billion vaccine doses to poorer countries over the next year. They also committed to increasing global manufacturing capacity around the world, improving early warning systems for pandemics and supporting science to cut the time it takes to develop vaccines

Help economies recover: The G7 countries said they would shift from supporting smaller countries' response to the crisis, to helping them grow and recover with jobs and investment

Climate change: The leaders committed to a "green revolution" that would limit the rise in global temperatures to 1.5C. They also promised to reach net-zero carbon emissions by 2050, halve emissions by 2030, and to conserve or protect at least 30% of land and oceans by 2030

Speaking beforehand, Sir David said: "The natural world today is greatly diminished... Our climate is warming fast. That is beyond doubt. Our societies and nations are unequal and that is sadly plain to see.

"But the question science forces us to address specifically in 2021 is whether as a result of these intertwined facts we are on the verge of destabilising the entire planet."

He said the decisions facing the world's richest countries were "the most important in human history".