A Ryanair plane flying from Greece to Lithuania has been diverted to Belarus, with the country's opposition figures saying it was done so a dissident journalist on board could be arrested. 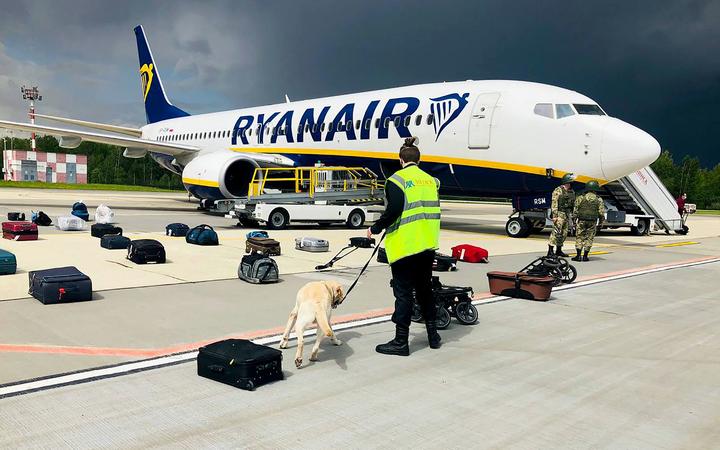 Belarus state media said the plane was diverted to Minsk because of a bomb scare but no explosives were found.

Political figures across Europe have already called for the EU and Nato to intervene.

Belarus opposition leader Svetlana Tikhanovskaya, who was beaten by Alexander Lukashenko in presidential polls last year widely denounced as rigged, was among those demanding Protasevich's release.

Since August's election, 66-year-old Lukashenko, who has ruled the country since 1994, has cracked down on dissenting voices. Many opposition figures have been arrested or, like Tikhanovskaya, fled into exile.

The plane has now left Minsk, Belarus's capital, for Lithuania, after spending several hours on the ground.

How was the flight diverted?

Flight FR4978 was en route from Athens to the Lithuanian capital Vilnius on Sunday when it turned east to Minsk shortly before it reached the Lithuanian border. Greece and Lithuania put the number of passengers on board at 171.

In a statement, Ryanair said that the crew were "notified by Belarus (Air Traffic Control) of a potential security threat on board and were instructed to divert to the nearest airport, Minsk".

The flight path, visible on the Flightradar24 website, suggests the plane was actually nearer to Vilnius than Minsk when it turned.

Ryanair said checks in Minsk found "nothing untoward" and the aircraft was cleared to depart after about five hours on the ground.

"Ryanair has notified the relevant national and European safety and security agencies and we apologise sincerely to all affected passengers for this regrettable delay which was outside Ryanair's control," it added.

The Ryanair statement made no mention of Protasevich.

Nexta editor-in-chief Tadeusz Giczan tweeted a quote from a passenger on the plane who said that Protasevich had told them who he was once they were on the ground at Minsk, with him adding "they'll execute me here".

Belta, the state-owned news agency in Belarus, said Lukashenko had personally given the order for the plane to land in Minsk following the bomb alert, and that a MiG-29 fighter jet had been despatched to accompany the Ryanair plane. 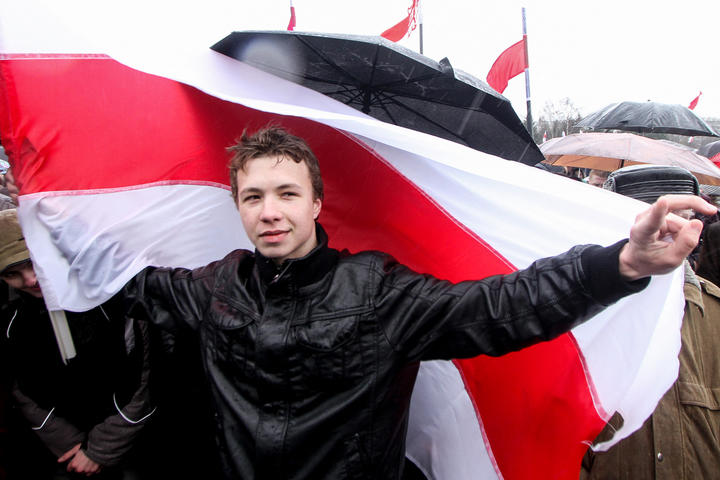 It has been angry and it is growing.

Latvia's Foreign Minister Edgars Rinkevics said Belarus's action was "contrary to international law" and the reaction should be "strong and effective".

The UN's agency for civil aviation, ICAO, said it was concerned about an "apparent forced landing" which could be "in contravention of the Chicago Convention" which sets out the rules on airspace and aircraft safety.

In the UK, Tom Tugendhat, chairman of the House of Commons foreign affairs committee, said that "forcing an aircraft to land to silence opposition voices is an attack on democracy".

Who is Protasevich and what is Nexta?

It played a key role for the Belarus opposition during the election and has continued to so in its aftermath, particularly with the government imposing news blackouts.

Tikhanovskaya said Protasevich, 26, had left Belarus in 2019 and covered the events of the 2020 presidential election with Nexta, after which criminal charges were filed against him in Belarus.

She said he faced the death penalty in Belarus as he has been categorised as a terrorist.

Western leaders have backed Tikhanovskaya, who claimed victory in the election before she was forced to leave for Lithuania. She had become a candidate after her husband was jailed and barred from running.