The Royal Australian Navy destroyer HMAS Sydney has been linked to the deaths of two whales after berthing in San Diego. 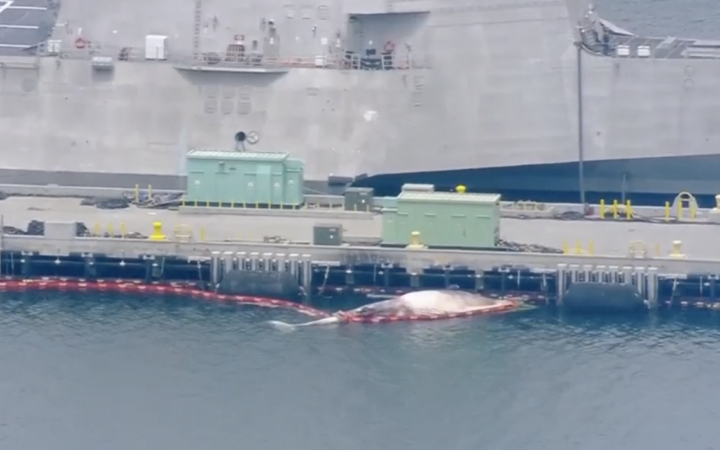 The death of two whales, a 20m one and an 8m, have been linked to the HMAS Sydney. Photo: Screenshot / ABC

In a statement to the ABC, the Australian Department of Defence confirmed that "as HMAS Sydney was berthing alongside Naval Base San Diego in California two deceased whales dislodged from her hull beneath the surface".

The department said the Australian and US navies were cooperating with local marine authorities and other agencies to review the incident.

Naval Base San Diego has secured the whale carcasses with booms until they can be removed.

Launched in 2018, the 146-metre-long HMAS Sydney is a Hobart Class Destroyer used for air defence, surface and undersea warfare and surveillance.

It is crewed by about 180 sailors and is fitted with sonar and radar capabilities.

The hull extends more than 7m below the waterline and the ship can reach speeds up to 28 knots (52km/h).

According to US media, a US Navy spokesperson said the animals - measuring about 20m and 8m - are fin whales, which have a year-round presence off southern California.

Two dead fin whales became dislodged from the hull of an Australian Navy ship as it pulled into Naval Base San Diego. @10news https://t.co/21hm2rHZew pic.twitter.com/Die4CYUiv8

Research biologist John Calambokidis told local broadcaster 10 News San Diego that up to 50 whale strikes occur every year off California, with crews usually unaware until the vessel slows down and the whales become dislodged.

"While it is possible [the Australian Navy collision] could be separate incidents, it also possible this is a mother and calf from the size distribution," he said.

He said fin whales were particularly vulnerable because of their size and because they spent a lot of time on the surface.