Pressure is mounting on India's government to impose a national lockdown as the country recorded more than 20 million Covid infections. 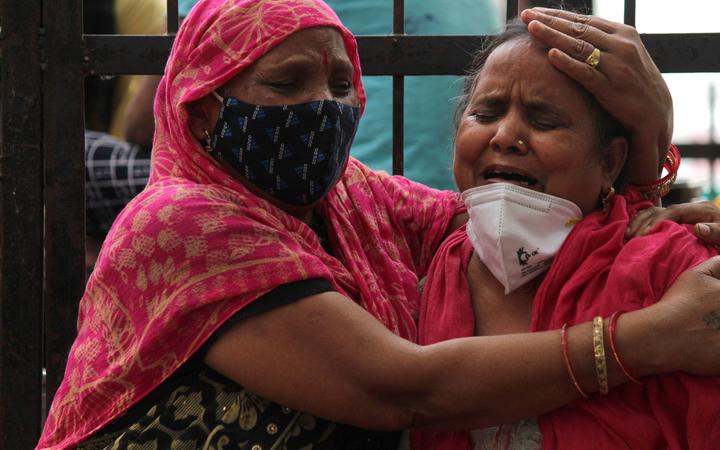 The prime minister is resisting the move due to the economic impact.

The government said that cases are "slowing down", but testing numbers have also dipped, meaning the true caseload could be far higher.

Confirmed infection numbers have however been consistently falling in Maharashtra state, which has driven the second wave since early April.

The decision to impose restrictions in India is made by individual state authorities, rather than the central government. Prime Minister Narendra Modi has said that states should only consider restrictions as "a last option."

Rahul Gandhi, the senior Congress leader, said there was no other way to stop the spread of the virus, tweeting: "A crime has been committed against India."

I just want to make it clear that a lockdown is now the only option because of a complete lack of strategy by GOI.

They allowed, rather, they actively helped the virus reach this stage where there’s no other way to stop it.

A crime has been committed against India.

Dr Anthony Fauci, America's top public health expert, described the situation as "extremely serious" and said a nationwide lockdown is needed, as well as a massive vaccination drive and the construction of makeshift hospitals. 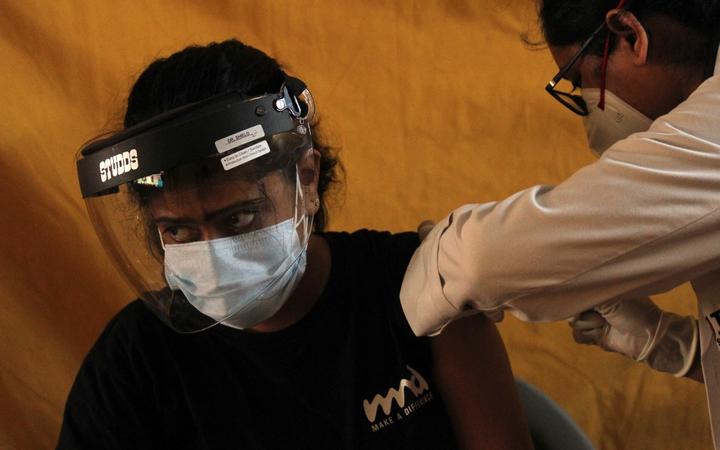 A healthcare worker gives a dose of a Covid-19 vaccine at a vaccination centre in New Delhi. Photo: AFP

Last year, Narendra Modi was heavily criticised after imposing a nationwide lockdown with less than four hours' notice. It caused a devastating humanitarian crisis as tens of thousands of migrant workers were left without work and forced to walk hundreds of kilometres to their native villages.

The lockdown saw India's economic output fall by a record 24 percent between April and June 2020 compared to the same period a year earlier, and the government has said another national lockdown would have dire consequences for the country's economy.

But business leaders have joined the calls for the measure. Members of India's Covid-19 taskforce which advises the central government are "pushing hard" for a two-week lockdown, The Indian Express reported, citing an anonymous member.

"A nationwide lockdown rather than what we are doing now, in bits and pieces across states, because of the simple fact that it is spreading all over," they are quoted as saying.

Many states have introduced restrictions, from full lockdowns to night curfews. The northern state of Bihar, which has been adding about 13,000 daily cases in recent days, is the latest to announce a full lockdown - only essential services, such as government offices, groceries and hospitals, will be open.

The capital, Delhi and financial hub, Mumbai, are also currently under restrictions.

Meanwhile an oxygen shortage has shown no signs of abating and people in several hotspot cities, including Delhi, are struggling for treatment.

India's second wave, fuelled by lax safety protocols and massive public festivals and election rallies, has overwhelmed its hospitals. Delays in testing, diagnosis and treatment, as well as a shortage of critical care beds and crucial drugs, has resulted in a spike in deaths.

The country has so far reported more than 222,000 deaths due to the virus. But experts say India's Covid-19 death toll is vastly under-reported as official tallies don't appear to match what people are witnessing on the ground - long lines at crematoriums, mass funeral pyres and cities running out of space to bury or cremate the dead.

Are infections actually slowing down?

While India's daily caseload does appear to have fallen, it's too early to say if infections are slowing down.

Given delays in testing and official record-keeping, experts typically look at weekly averages rather than daily cases for a more accurate picture. And on average, India's cases were rising this past week - but at a slower rate than the previous week.

But it's also true that daily cases have fallen, on average, in Delhi, Uttar Pradesh and Maharashtra, all hotspots.

Erratic testing, however, makes it hard to gauge the significance of these numbers. While Maharashtra's testing numbers have been consistent, Delhi's have dropped in recent weeks.

The other issue, experts say, is insufficient testing. While Uttar Pradesh, one of the worst-affected states, has recorded no drop in testing figures, it's testing far less than other states.

Health officials said there was "cautious hope" of some respite from the second wave. But Lav Agarwal, joint secretary of the health ministry, said that the "gains" were very early and needed to be sustained by "containment measures at district and state level".

Experts also say that other hotspots are likely to emerge in the coming weeks as the pandemic moves through the country.

A struggle for oxygen

Delhi Chief Minister Arvind Kejriwal has repeatedly said that the city is not getting enough oxygen from the federal government, which allocates oxygen quotas to states.

But federal officials deny there are shortages, saying the challenge has come from transportation.

India produces thousands of tonnes of oxygen a day, but some experts say the supply crunch comes from a lack of investment in distribution networks.

Delhi hospitals have resorted to sending SOS messages on social media to secure supplies. For residents, hours spent in queues to top up portable canisters have become part of daily life.

Officials have also been urged to find more sites for cremations as the city's morgues and crematoriums are overwhelmed by masses of Covid deaths.

A sluggish vaccination campaign has compounded the crisis.

Since January, India has administered more than 157 million vaccine doses so far - it ranks third in the world, after China and the United States. But just over 10 percent of India's 1.4 billion people have had one dose and only about 2 percent have got both doses. 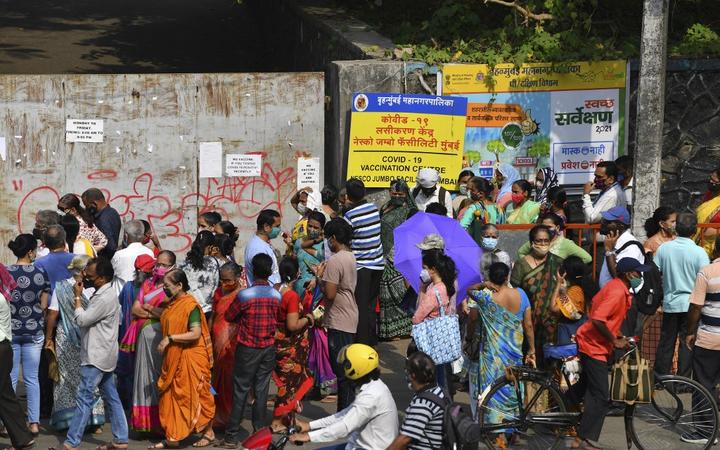 People wait outside a vaccination centre in Mumbai. Photo: AFP

Despite being the world's biggest producer of vaccines, India is facing a shortage of supplies. And vaccination rates are down, from 3.7 million doses a day about a month ago to just 1.7 million a day.

The chief executive of India's Serum Institute, the world's biggest vaccine manufacturer, has warned shortages will last for months. It's set to deliver 220 million doses over the next few months, which would still only cover 8 percent of India's population.

The Indian government is reported to be in discussions with Pfizer, which is seeking an "expedited approval pathway" for its Covid-19 vaccine.