Blasts from at least one parcel bomb in Myanmar have killed five people. 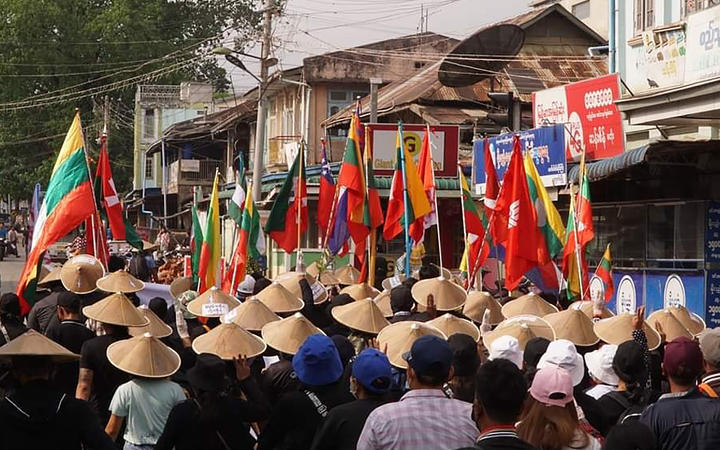 A protest on 2 May against the military coup in Myanmar. Photo: AFP PHOTO / SHWE PHEE MYAY NEWS AGENCY

The dead include an ousted lawmaker and three police officers who had joined a civil disobedience movement opposing military rule, media reported today.

Since the elected government led by Nobel laureate Aung San Suu Kyi was overthrown in a coup on 1 February, Myanmar has seen an increasing number of small blasts in residential areas, while some have targeted government offices or military facilities.

The latest blasts were in a village in the southern central part of Myanmar in Western Bago and occurred about 5pm yesterday, the Myanmar Now news portal reported, citing a resident.

Three blasts were triggered when at least one parcel bomb exploded at a house in the village, killing a regional lawmaker from Suu Kyi's National League of Democracy (NLD) party, as well as the three police officers and a resident, the report said.

Another police officer involved in the civil disobedience movement was also severely wounded after his arms were blown off by the explosion, the resident was cited as saying. He was taken to hospital for treatment, it said.

Reuters could not independently verify the reports and a military spokesperson did not answer a phone call seeking comment.

Violence has escalated since the coup, with hundreds reported killed by security forces trying to quell pro-democracy protests in cities and rural towns. Ethnic militias have also backed opposition to the junta, and the military is fighting these groups on the fringes of Myanmar.

Yesterday, the Kachin Independence Army, an ethnic rebel group, said it had shot down a military helicopter as fighting in the country's northern and eastern frontier regions intensified.

Domestic media also reported that a junta-appointed local administrator had been stabbed to death in the main city, Yangon.

Police and the military did not respond to requests for comment.

Reuters was unable to verify casualties because of the curbs placed on media by the junta. Many journalists are among the thousands of people who have been detained.

The junta said it had to seize power because its complaints of fraud in a November election won by Suu Kyi's party were not addressed by an election commission that deemed the vote fair.

Suu Kyi, 75, has been detained since the coup along with many other members of her party. The AAPP said more than 3600 people were in detention for opposing the military.