Australia's Prime Minister Scott Morrison has denied a major investment in military bases in northern Australia is aimed at sending a message to China. 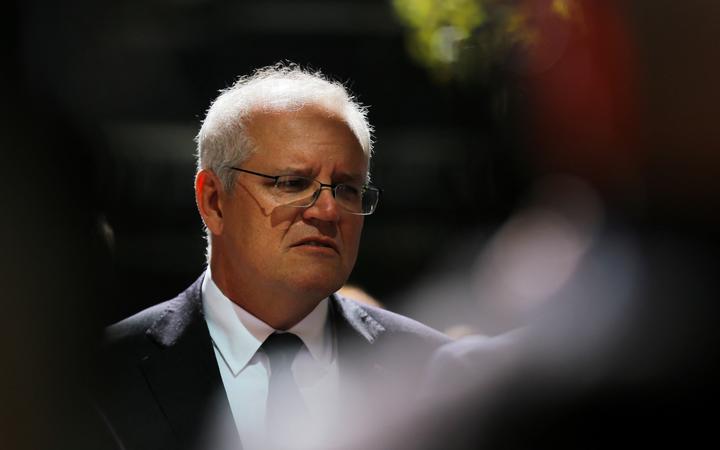 At the same time, he has also defended comments made by Australia's new Defence Minister Peter Dutton that the possibility of conflict with China over Taiwan should not be "discounted".

Morrison was in Darwin to confirm a $747 million upgrade to defence facilities in the Northern Territory, part of $8 billion set to be spent on military infrastructure in northern Australia over the next decade.

The bases are often used for joint Australian-US military training exercises, including an annual rotation of thousands of US Marines.

Morrison said the goal of properly resourcing the Australian military was aimed at keeping peace in an "uncertain" region rather than preparing for conflict.

"All of our objectives through the activities of our Defence Forces is designed to pursue peace," he said.

"In a region as uncertain as this you need to ensure that you have the Defence capability that enables you to protect and defend Australia's interests in that region.

"And this enables us to ensure there's an appropriate balance - particularly in partnership with our United States allies to ensure we can promote an environment where peace will be the outcome."

During an interview last weekend, Dutton observed conflict over Taiwan was a possibility, and that reunification was a "long-held objective" of China.

That prompted a strong response from China, suggesting any progression in China-Australia relations required adherence to its 'One China' policy.

The prime minister said he did not consider Dutton's comments to be inflammatory.

"I have set out what the government's purposes are here, and I know that's strongly supported by the defence minister, who has made the point about ensuring we have appropriate capability," Morrison said.

"That's the defence minister's job, to ensure that we have that capability to deal with any matter of scenarios, and that's indeed what these training environments provide for.

"That's why you invest $747 million to ensure that your Defence Forces have the best training environments possible to build their capabilities to keep Australians safe."

The comments have been viewed as provocative, but Pezzullo denied he was arguing war with countries such as China was inevitable.

"I heard the prime minister yesterday say the same thing at a press conference, where he might or might not have been asked a question that may or may not have been about my Anzac Day message," Pezzullo told an event in Canberra.

"He said the government's policy is constantly to be working through effective statecraft and diplomacy, but also preparedness - he made explicit reference to the investment that the government's made in our defence capability.

"Constantly searching for peace in a way that's vigilant as to the risks, but in a way that not only presumes that others want peace, but we're all actively working towards it."

Pezzullo described his speech as a "personal lament" for peace, on a day when the sacrifice of Australians who have served in the nation's Defence Force was being commemorated.

"If only the same striving for peace - along with, as Minister [for Home Affairs Karen] Andrews said, 'Being alert to risks without being alarmed by them' - if only the same vigilance, as well as the longing for peace, had been in evidence in times past, perhaps fewer would have fallen," he said.

"I think [it is] an entirely reasonable point to be making."

The Home Affairs secretary said public servants, regardless of their seniority, advised on, rather than dictated, government policy.

"It's terribly important that when secretaries speak, or heads of agencies, we speak about matters of strategy and implementation and administration, but not of policy - which always is a matter for an elected minister," Pezzullo said.

China urges Australia to 'take its own medicine'

Pezzullo's remarks came after Australia's top diplomat said China wanted Australia to "compromise on key national interests" before it would resume cooperation with the federal government.

Department of Foreign Affairs and Trade secretary Frances Adamson made the comments in a recent speech where she outlined a "range of difficulties" Australia was facing with its largest trading partner.

In response, Chinese foreign ministry spokesman Wang Wengbin said the change needed to come on the Australian side of the relationship.

"The root cause of the severe difficulties in bilateral relations is that Australia grossly interferes in China's domestic affairs," he said.

"None of the responsibility rests with China. Basically, Australia is telling others to take the medicine when it is sick itself.

"We hope Australia will look at China and China's development in an objective and rational light and work to build mutual trust and facilitate practical cooperation instead of going further down the wrong path."