Former Minneapolis policeman Derek Chauvin waived his right to testify to the jury about his part in the deadly arrest of George Floyd as both sides rested their cases at his murder trial, the most high-profile police misconduct case in decades. 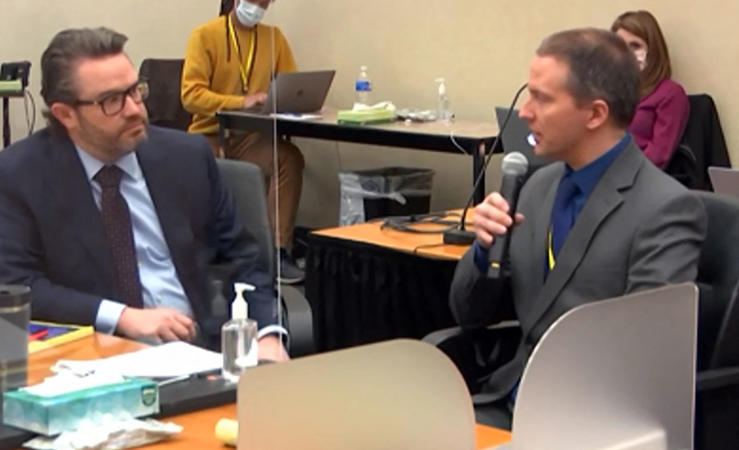 Derek Chauvin, right, sitting next to defence attorney Eric Nelson as he telling the presiding judge he has decided not to testify in his own defence. Photo: AFP / Court TV

"I will invoke my Fifth Amendment privilege today," Chauvin, 45, said in a hearing before the jury was brought in on Thursday morning, referring to the constitutional right against self-incrimination.

They were his most extensive remarks since his trial began with jury selection on 8 March.

The defence told Hennepin County District Judge Peter Cahill it would call no more witnesses after two days of testimony and rested its case, which has focused on raising doubts about what caused Floyd's death.

It is rare for defendants to take the stand in a criminal case because they face intense cross-examination by prosecutors and risk undermining their case and credibility.

After a short appearance by a rebuttal witness, prosecutors from the Minnesota attorney general's office also rested their case.

Cahill said jurors would hear closing arguments on Monday before receiving the case for deliberations. They will be sequestered at a hotel in a city whose downtown is filled with National Guard troops and boarded-up windows, preparing for potential unrest.

"If I were you, I would plan for long and hope for short," Cahill told jurors on the question of how much to pack.

As the trial unfolded, tensions escalated across Minneapolis after a police officer in nearby Brooklyn Center shot and killed Daunte Wright, a 20-year-old Black man, during a traffic stop on Sunday. Hundreds of protesters massed outside Brooklyn Center police headquarters for a fourth night on Wednesday after the officer, Kim Potter, resigned and was charged with second-degree manslaughter.

Chauvin, who is white, was seen in bystander video kneeling on the neck of Floyd, a 46-year-old Black man in handcuffs, for more than nine minutes after Floyd was accused of using a counterfeit $20 bill to buy cigarettes. The footage of Floyd's death sparked global protests against the disproportionate use of force by police against Black people. 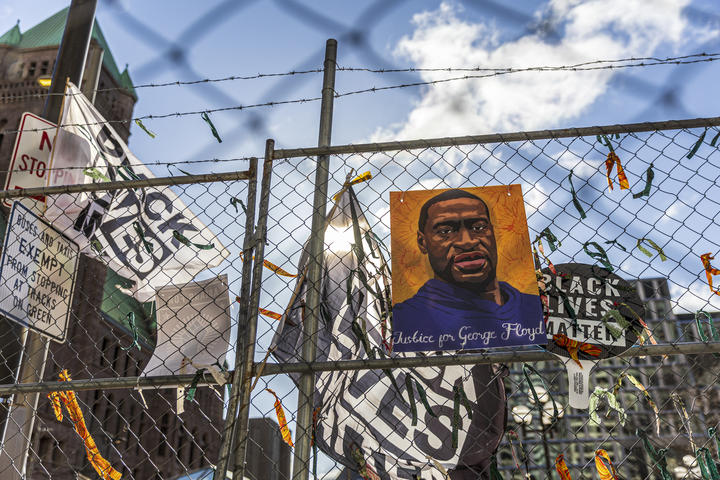 A poster with George Floyd's picture and a sign reads that "I Can't Breathe" hang from a security fence outside the Hennepin County government center in Minneapolis. The footage of Floyd's death sparked global protests. Photo: AFP

Prosecutors rested their case earlier this week, calling their last witness, Floyd's brother Philonise, to the stand where he told the jury on Monday that his brother was a "big momma's boy."

Over the first two weeks of the trial, the prosecution called eyewitnesses - from a 9-year-old girl to a 61-year-old man - who described their despair and horror as they watched the incident unfold.

They also called a series of police experts, including the Minneapolis police chief himself, and seven doctors with different medical specialties who told the jury it was Chauvin's actions that killed Floyd, not a drug overdose, as the defence has contended.

Prosecutors also made the most of an abundance of video of the death, recorded from multiple angles on cellphones and police body-worn cameras.

On Tuesday, Chauvin's defence began presenting their case by calling to the stand a now-retired officer who pulled over a car in which Floyd was a passenger in 2019 and told the jury that he was unresponsive and noncompliant during the incident.

His lawyers also called an expert on the use of force to tell the jury that Chauvin's use of force was appropriate, contradicting the Minneapolis police chief, who testified that it far exceeded an appropriate response.

They also called a forensic pathologist, former Maryland chief medical examiner Dr David Fowler, who said Floyd, whose death was ruled a homicide at the hands of the police, really died of heart disease, and that the exhaust fumes of the adjacent police car may have also poisoned him.

Dr Martin Tobin, a pulmonologist who testified as an expert witness for prosecutors, returned to the stand on Thursday as a rebuttal witness in an effort to undermine Fowler's testimony about carbon monoxide poisoning.

Tobin was questioned by prosecutors for only a few minutes, telling jurors that previously shared data showed the level of carbon monoxide was "within the normal range."

The judge said prosecutors had been notified by the defence earlier this year that Chauvin would advance a theory of carbon monoxide poisoning. And so he denied the request to admit the new evidence, saying it was too last-minute in a way that was prejudicial to Chauvin.

Cahill warned prosecutors that if Tobin even mentioned the existence of the results, he would declare a mistrial.