The police chief of Minneapolis has testified that ex-officer Derek Chauvin violated the agency's policy on force during the arrest of George Floyd. 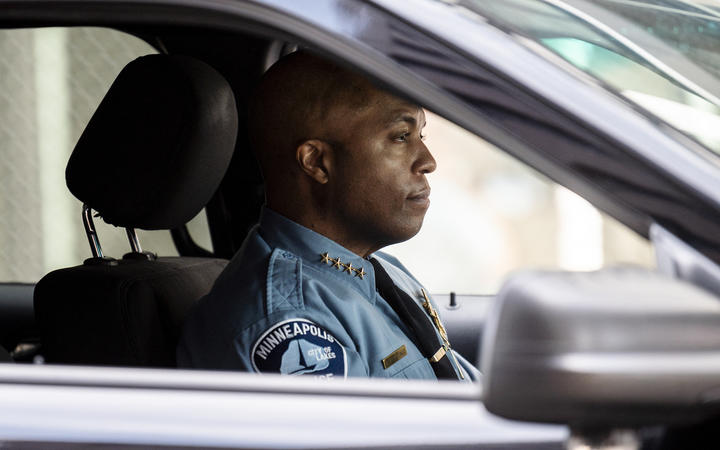 Chief Medaria Arradondo said the way Chauvin restrained Floyd was not in line with training and "certainly not part of our ethics and our values".

The chief had fired Chauvin and the three other officers involved days after Floyd's death last May.

Chauvin is on trial for murder and has denied the charges against him.

Monday marked the sixth day in Chauvin's trial, which is expected to last for at least one month.

What did the police chief say?

Prosecutors, who are seeking to prove that Chauvin's actions violated his training, focused their questions on departmental guidelines and strategies taught to help officers de-escalate situations.

Arradondo told the court Floyd should not have been restrained in the manner used by the officers after he stopped resisting, "and certainly once he was in distress".

He said the type of restraint Chauvin, 45, was using came "once there was no longer any resistance and clearly after Floyd was no longer responsive - and even motionless".

Arradondo also noted it would be rare for officers to take into custody a suspect accused of passing a counterfeit bill, as Floyd was.

The police chief said "talking your way out of a situation" was always better than using force, adding that officers may seek the "community's help" when available. 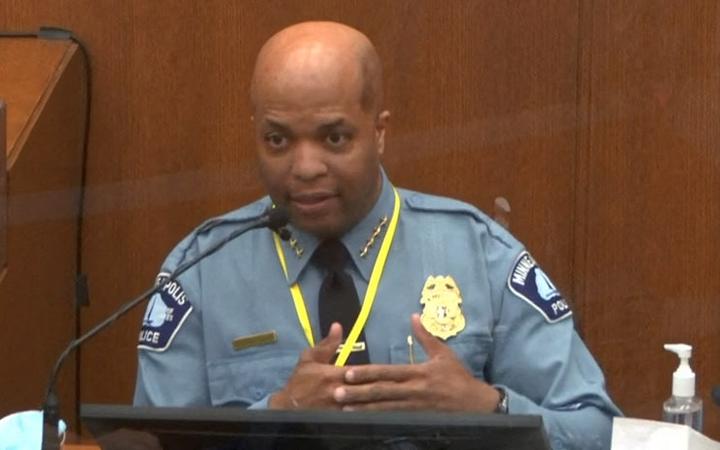 Defence lawyer Eric Nelson questioned Arradondo about officers brandishing a weapon to defuse a situation, as Chauvin did by holding up pepper spray to onlookers.

"Sometimes an officer has to take out his gun, and say 'hey, if you don't listen to me I'm going use force'," Nelson said.

The chief agreed it was in line with policy to sometimes gesture in such a way to get a suspect to back down.

When shown different angles of footage of the arrest by Nelson, Arradondo also noted that right before the paramedics arrived, it appeared that Chauvin had shifted his knee onto Floyd's shoulder blade.

Who is Chief Arradondo?

Arradondo joined the force in 1989. He became the city's first African-American police chief in 2017.

Last June, Arradondo said that Floyd's "tragic death was not due to a lack of training - the training was there". He called Floyd's death "murder", and said Chauvin "knew that Floyd was nonresponsive" during the last few minutes.

Earlier in his career, he successfully sued the Minneapolis police department along with four other officers, accusing the force of tolerating discriminatory practices.

What else happened in court?

On Monday, the court also heard from Dr Bradford Wankhede Langenfeld, who pronounced Floyd dead 30 minutes after he arrived at the Hennepin Country Medical Centre.

Langenfeld said he believed Floyd's death was caused from a lack of oxygen, called asphyxia.

Prosecutors have suggested that asphyxiation was the cause of Floyd's death - contrasting the ruling of the medical examiner who said Mr Floyd died of "cardiopulmonary arrest", which means a person's heart and lungs have stopped.

Chauvin's defence team has contended that alleged drug use and an underlying heart condition contributed to Floyd's death.

The physician's appearance in court follows testimony from two paramedics who said that Floyd had no pulse and did not appear to be breathing when they arrived at the scene.

Why is the case so important?

Footage of Chauvin kneeling on Floyd's neck was viewed around the world and sparked mass demonstrations against racism and police brutality.

As police officers are rarely convicted or charged at all for deaths that occur in custody, the verdict in this trial is being seen as an indication of how the US legal system will treat such cases in future.