Minnesota authorities arrested the police officer who fatally shot a Black man during a scuffle that followed a routine traffic stop and said they would charge her with second-degree manslaughter. 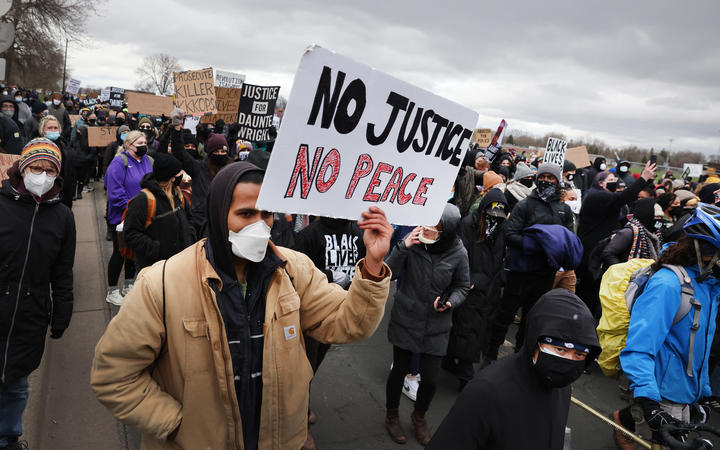 Kim Potter, a 26-year veteran who resigned from the Brooklyn Center police force on Tuesday, has been taken into custody.

Wright was shot on Sunday after being pulled over for what police said was an expired car registration. Officers discovered there was a warrant out for his arrest, and Potter accidentally drew her pistol instead of her Taser during a struggle with Wright, who got back into his car, officials said.

In police video of the incident, Potter can be heard shouting, "Holy shit, I just shot him."

To convict Potter of second-degree manslaughter under Minnesota law, prosecutors must show that she was "culpably negligent" and took an "unreasonable risk" in her actions against Wright. The charge carries a maximum sentence of 10 years in prison and a $20,000 fine.

Attorney Benjamin Crump, who is representing Wright's family, said in a statement on Wednesday that the charge was a step but fell short of fulfilling a greater need for police reform in the United States.

"While we appreciate that the district attorney is pursuing justice for Daunte, no conviction can give the Wright family their loved one back. This was no accident. This was an intentional, deliberate, and unlawful use of force.

"Driving while Black continues to result in a death sentence," Crump said.

The shooting has renewed criticism of discretionary vehicle stops for minor traffic violations, in which police officers have legal leeway to act on racial bias, according to civil rights advocates.

It has also drawn attention to potential issues with the use of Tasers by police officers, with some experts saying problems persist with training and the weapon's design.

Wright was killed just miles from the Minneapolis courthouse where the trial of Derek Chauvin, the former Minneapolis policeman charged with murdering George Floyd last May, is taking place.

Floyd, 46, who died in handcuffs with his neck pinned to the street under Chauvin's knee, became the face of protests against racism and police brutality that swept the United States last year.

Protesters assembled outside Brooklyn Center's police headquarters for a third night on Tuesday. Some demonstrators lobbed bottles and other projectiles over a fence in front of the headquarters. Officers fired teargas, nonlethal rounds and flash-bang rounds, to disperse the crowd.