Tear gas has been fired and a curfew imposed amid angry protests after police fatally shot a black man in a traffic stop in the US city of Brooklyn Center, just north of Minneapolis. 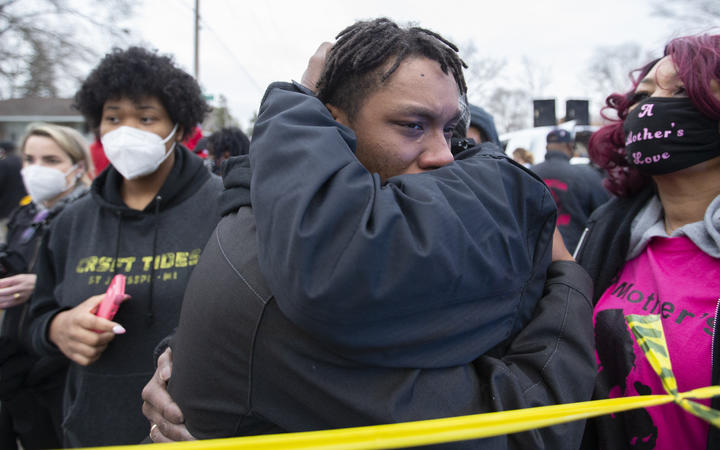 Family of Daunte Wright, who was shot by an officer during a traffic stop in Brooklyn Center near where Derek Chauvin is on trial in the death of George Floyd, react in Brooklyn Center, Minnesota, United States on April 11, 2021. Photo: AFP

The man has been identified by relatives as 20-year-old Daunte Wright.

"It is my belief the officer meant to deploy their Taser but shot him with a single bullet," he said on Monday morning.

The officer is now on administrative leave while an investigation is carried out.

Tensions in Minneapolis are high as the trial of a former officer accused of killing George Floyd takes place.

A courtroom just 10 miles (16km) from the latest unrest will resume proceedings on Monday, with the prosecution expected to wrap up its case and the defence of the ex-officer, Derek Chauvin, to begin.

As the crowd chants “hands up don’t shoot” flashbangs are thrown. Got it in this video @WCCO pic.twitter.com/nMH5jNebbH

What's the latest at the scene?

Protesters wrote with chalk on pavements and lit candles, but police later ordered the protesters to disperse, with footage showing tear gas and stun grenades being fired by officers.

About 20 businesses in a nearby shopping centre were later broken into, the StarTribune reported, with sporadic looting spreading to other areas of Minneapolis.

Brooklyn Center Mayor Mike Elliott announced on Twitter he was issuing a curfew until 06:00 (local time).

In an early-morning video post on the death of Daunte Wright, Mayor Elliott said "our hearts are with his family" and pledged "we are going to make sure that everything is done in our power to ensure justice".

He urged people protesting to do so peacefully.

Members of the Minnesota National Guard, already deployed for the murder trial of Derek Chauvin over the death of George Floyd, were sent to Brooklyn Center.

Some remained on the streets after the curfew ended, but by that time the crowds had mainly dispersed. 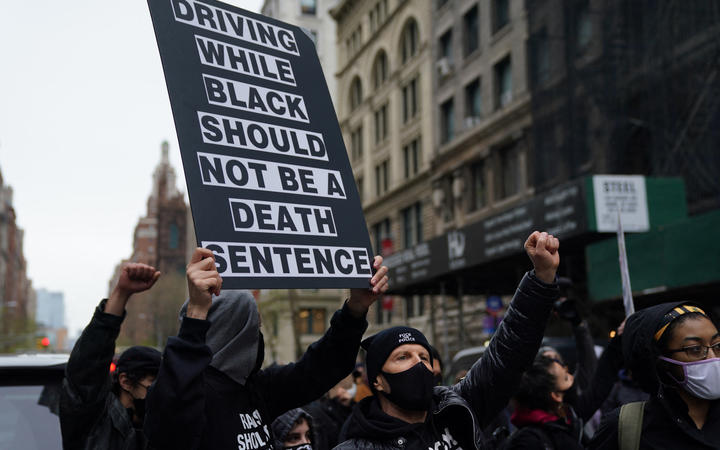 What happened to Daunte Wright?

In a statement, the Brooklyn Center Police Department said officers had pulled a man over for a traffic violation on Sunday afternoon and determined that he had an outstanding arrest warrant.

They said that when police tried to arrest him, he re-entered the vehicle.

An officer then shot the driver, who drove on for several blocks before he crashed into another vehicle. He was pronounced dead at the scene.

A female passenger in the vehicle suffered non-life-threatening injuries.

Police said the officers involved were wearing body cameras, and dash cameras had also been activated.

Mr Wright's mother, Katie, said her son had called her during the traffic stop and he said he had been pulled over because of "air fresheners hanging from his rear-view mirror". She said she then heard scuffling and the phone line was cut.

"A minute later, I called and his girlfriend answered, who was the passenger in the car, and said that he'd been shot... and my son was laying there lifeless."

She said her son's body had been left on the ground by officers, adding: "Nobody will tell us anything. Nobody will talk to us... I said please take my son off the ground."

"Our state mourns another life of a black man taken by law enforcement," he said.

Why Minneapolis is tense

The murder trial of Derek Chauvin over the death of George Floyd has been under way in the city for two weeks now.

Chauvin was filmed kneeling on Mr Floyd's neck for more than nine minutes during an arrest operation in Minneapolis last May.

The footage of the incident sparked global protests against racism.

The trial is expected to last at least one month and law enforcement officials have already been bracing for possible unrest once the jury reaches a verdict.

George Floyd's death sparked waves of protests around the city, many peaceful but some violent with hundreds of buildings damaged.