The Princess Royal has said her father the Duke of Edinburgh was her "teacher, supporter and critic". 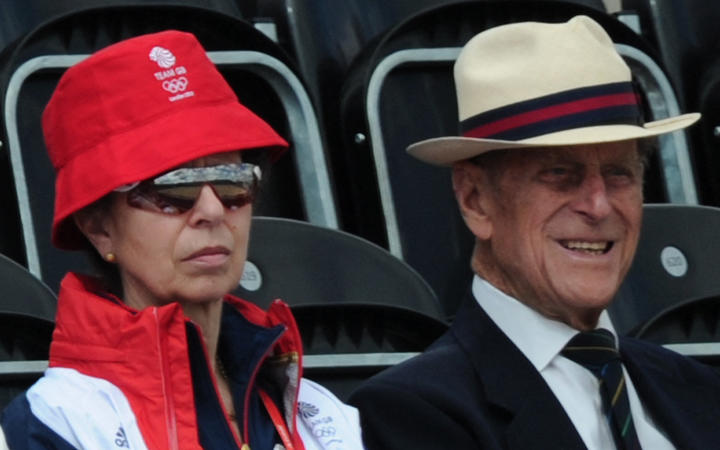 Princess Anne and her father Prince Philip watch a sporting event at the Equestrian Arena in Greenwich Park in London on July 29, 2012. Photo: AFP

Princess Anne - the duke's only daughter - said he would leave a "legacy which can inspire us all".

Her written statement comes after her brother, the Duke of York, said the Queen had described the death of Prince Philip as "having left a huge void in her life".

He and his brother the Earl of Wessex earlier paid tribute to their father.

In a statement on the Royal Family's website, the princess said she "most wanted to emulate" her father's example of a "life well lived and service freely given".

She said "his ability to treat every person as an individual in their own right with their own skills" was reflected in the organisations he worked with.

"I regard it as an honour and a privilege to have been asked to follow in his footsteps and it has been a pleasure to have kept him in touch with their activities," she added.

On Sunday, a special remembrance service for Prince Philip was held in Canterbury Cathedral as the UK observes a period of official mourning.

It was led by the Archbishop of Canterbury, Justin Welby, who is expected to officiate at the duke's funeral on Saturday (local time).

He said that "for the Royal Family, as for every other, no words can reach into the depth of sorrow that goes into bereavement".

A ceremonial royal funeral will be held for the duke at St George's Chapel, in the grounds of Windsor Castle, at 15:00 BST on 17 April (2am on 18 April NZ time). The event will be televised.

Members of the Royal Family will walk behind the coffin ahead of the funeral, while the Queen will travel separately to the chapel.

The Duke of Sussex will fly from the US for the service, though it is not clear when. His wife, Meghan, who is pregnant, will remain at home in California on the advice of doctors.

It will be the first time Prince William and Prince Harry will meet face to face since the Sussexes aired criticisms of the Royal Family in an interview to US broadcaster Oprah Winfrey last month.

Meanwhile, Prince Andrew has said that his father's death was a "terrible loss", and his family was "rallying round" to support the Queen.

"We've lost the grandfather of the nation," he added, as he left a service at Windsor's Royal Lodge.

He was joined by the Earl and Countess of Wessex and their daughter Lady Louise Windsor.

He said the Royal Family was grateful for all the "absolutely amazing tributes" to Prince Philip, who died at Windsor Castle on Friday, aged 99.

He added: "The Queen, as you would expect, is an incredibly stoic person.

"She described it as having left a huge void in her life but we, the family, the ones that are close, are rallying round to make sure that we're there to support her."

Speaking of his love for his father, Prince Andrew said: "He was so calm. If you had a problem, he would think about it.

"He was always somebody you could go to and he would always listen so it's a great loss.

Prince Andrew stepped back from royal duties in 2019 after criticism of his ties to convicted sex offender Jeffrey Epstein intensified following a BBC interview.

The Earl of Wessex, the Queen's youngest son, said: "However much one tries to prepare oneself for something like this, it's still a dreadful shock."

The Countess of Wessex said the Queen was "thinking of others before herself".

Speaking to members of the congregation outside the chapel, Sophie said that Prince Philip's death was "very peaceful".

"It was right for him. It was so gentle. It was just like somebody took him by the hand and off he went," she said.

"Very, very peaceful and that's all you want for somebody isn't it?"

She added: "I think it's so much easier for the person that goes than the people that are left behind."

The Prince of Wales paid tribute to his "dear papa" on Saturday, saying he and the Royal Family would miss him "enormously".

He said the duke had given the "most remarkable, devoted service" to the Queen, the Royal Family, the country, and the Commonwealth.

Earlier, the former prime minister Sir John Major, who was appointed a special guardian to the Duke of Cambridge and the Duke of Sussex after their mother, Diana, Princess of Wales died in 1997, said the "shared grief" over the death of Prince Philip is an "ideal opportunity" to mend any rifts in the Royal Family.