Joe Biden has been sworn in as the 46th President of the United States after a career in politics that has spanned five decades. Here's a look at how he got there. 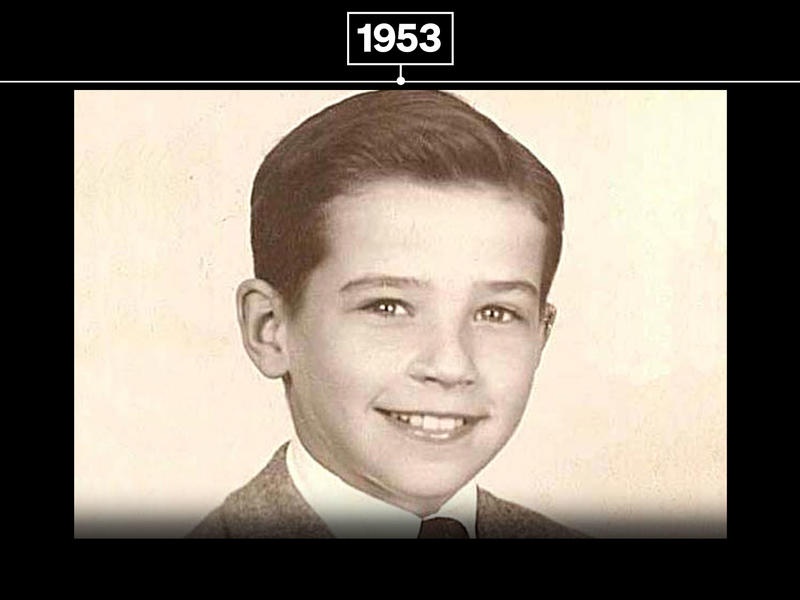 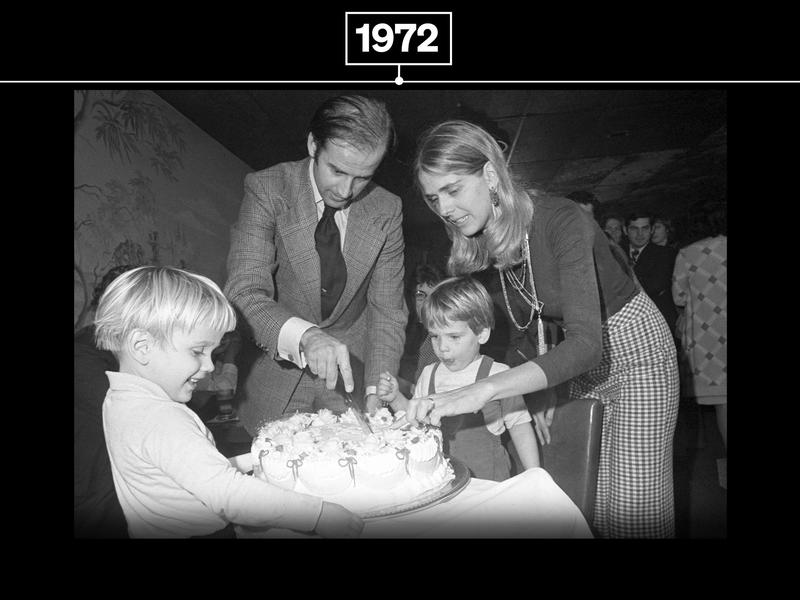 Biden married his first wife, Neilia Hunter in 1966. In 1972, tragedy struck when his wife Neilia (pictured) and daughter Naomi were killed in a car accident. His son's Beau and Hunter were also involved in the crash and were hospitalised. Photo: Getty Images 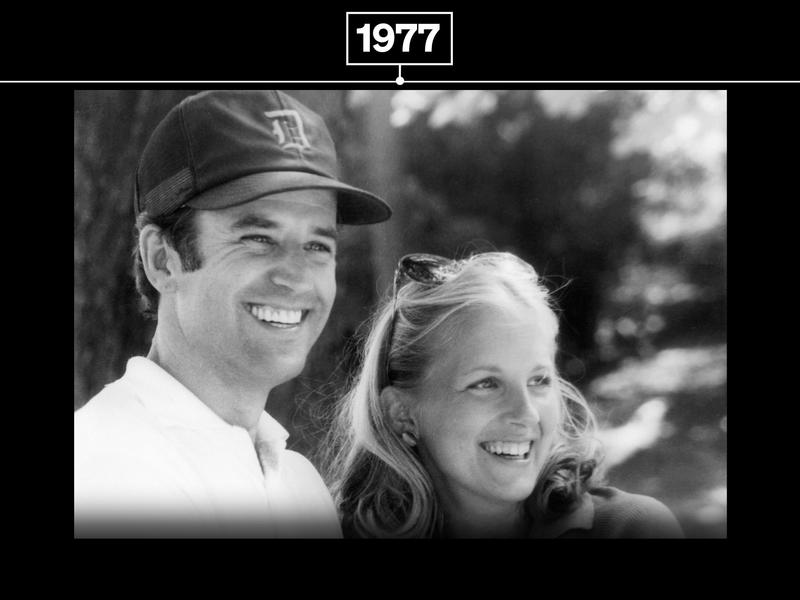 In 1975, Biden meets school teacher Jill Tracy Jacobs, whom he marries two years later in 1977. They have one daughter together, Ashley, born in 1981. Photo: Public Domain 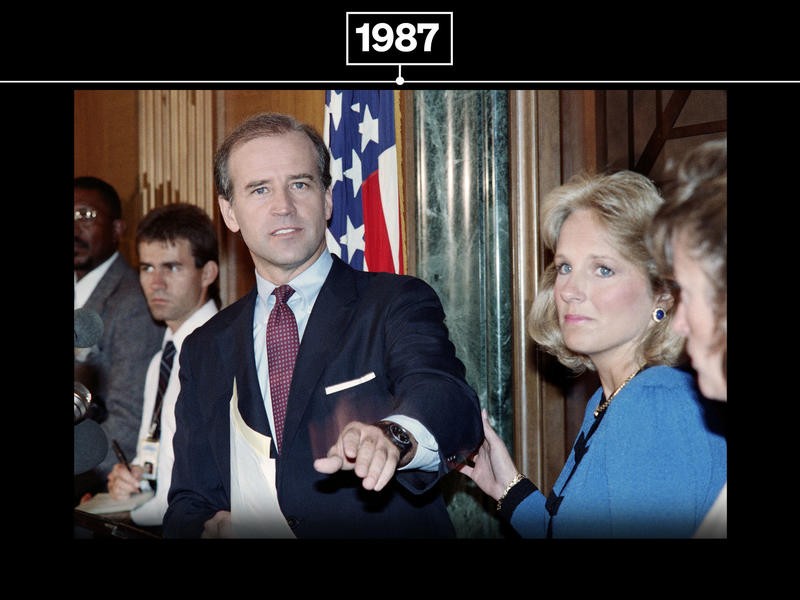 Biden formally delcared his run for President of the United States on 9 June 1987. His campaign was thwarted by allegations of plagarism, namely stealing lines from a UK labour leader Neil Kinnock and former President John F. Kennedy. He formally pulled out of the running to be president on 23 September 1987. Photo: AFP 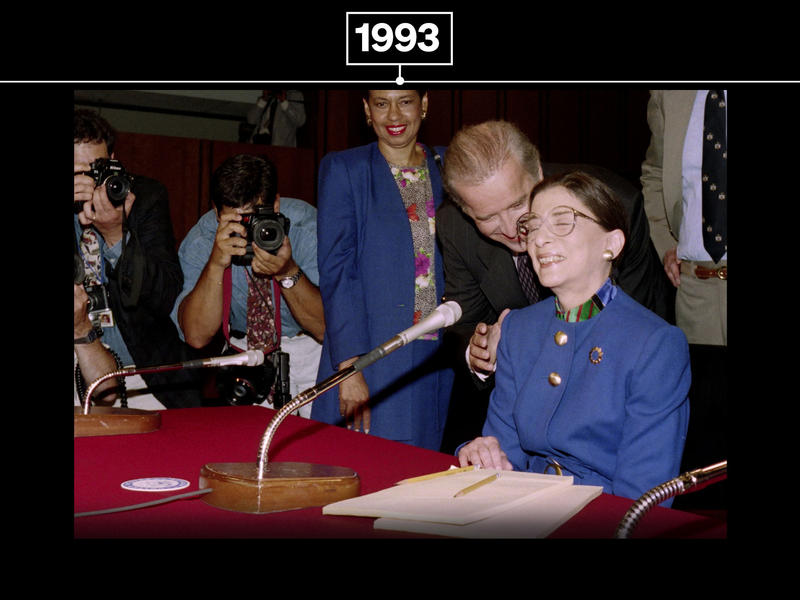 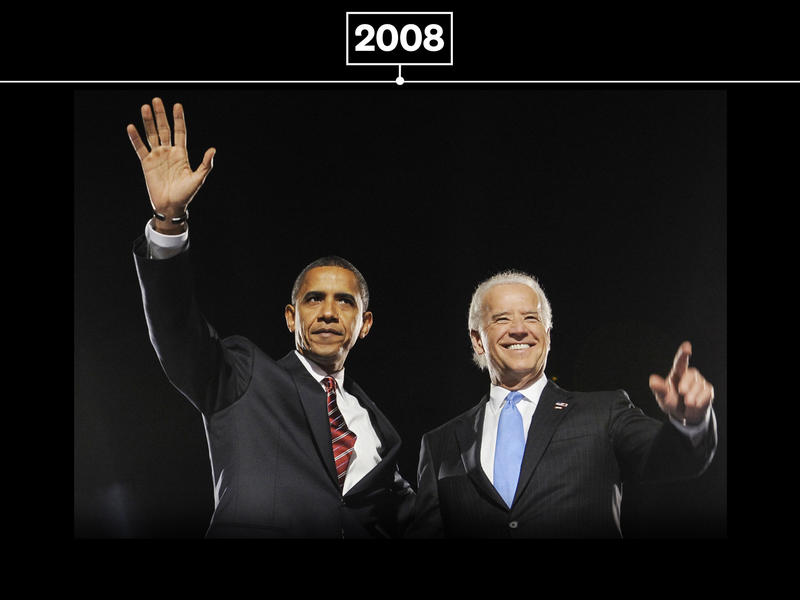 Joe Biden had another failed run for the presidency in 2008. Barack Obama went on to win the nomination and asked Biden to be his running mate. On November 4, 2008, Obama and Biden were elected as President and Vice President of the United States. Photo: AFP 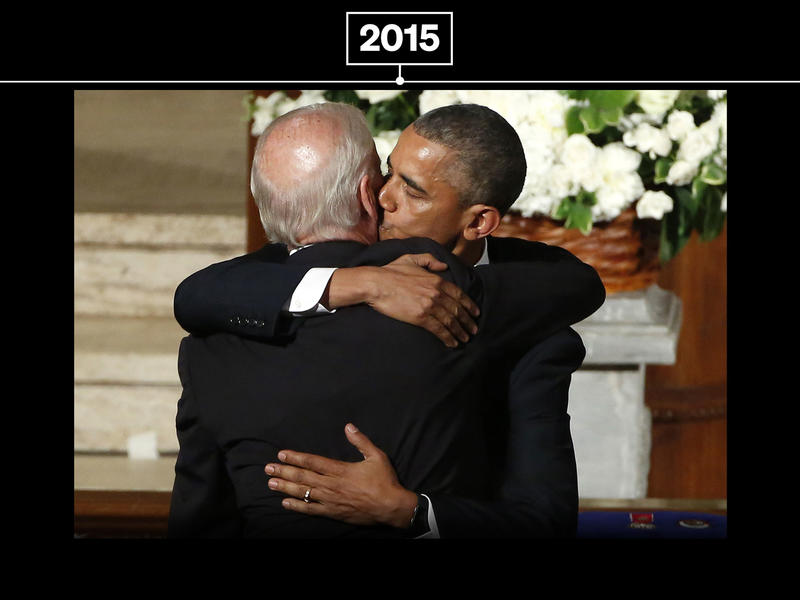 Tragedy struck the Biden family again in 2015, with the death of his eldest son Beau to brain cancer. Joe Biden cited Beau's death as a reason he decided against running for President in 2016. Photo: AFP 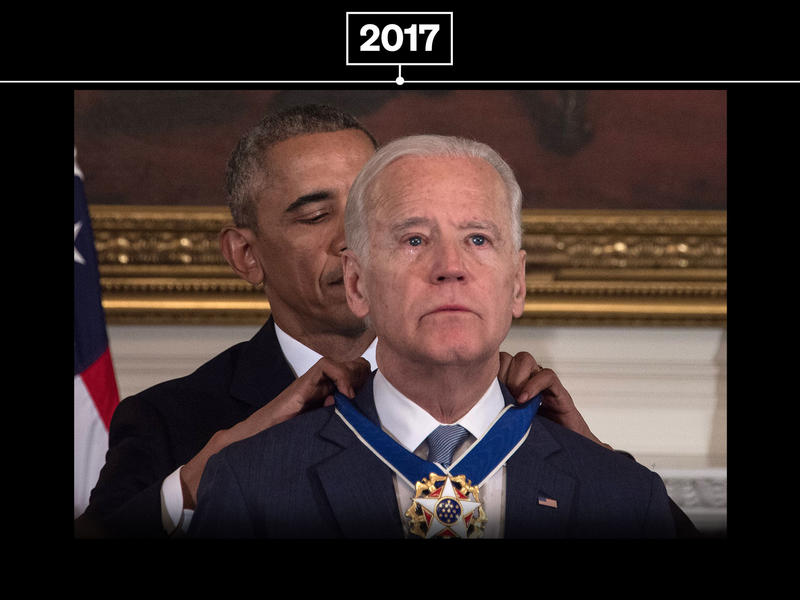 Before leaving office after a second term, Biden was awarded the by President Barack Obama. Photo: AFP 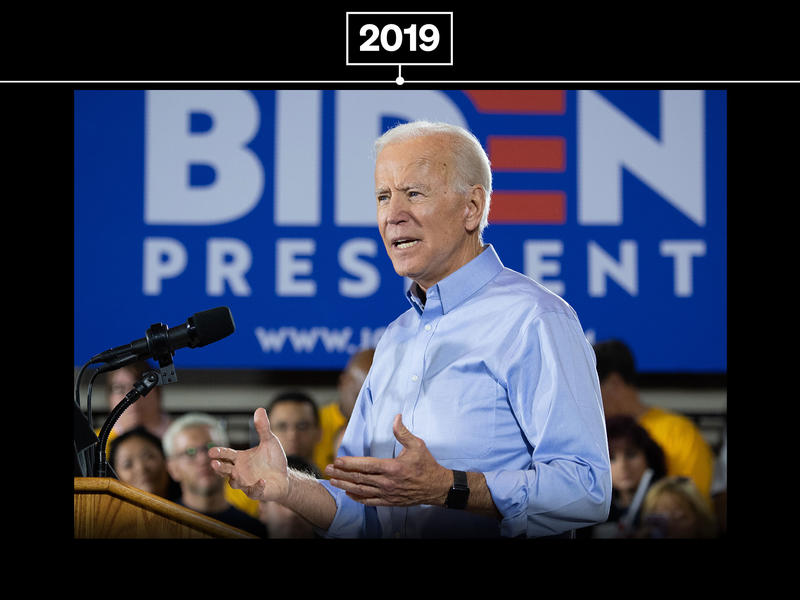 On 25 April 2019, Biden officially launched his campaign for presidency for the third time, saying the contest against Mr Trump was a fight for the future of American democracy. Photo: AFP 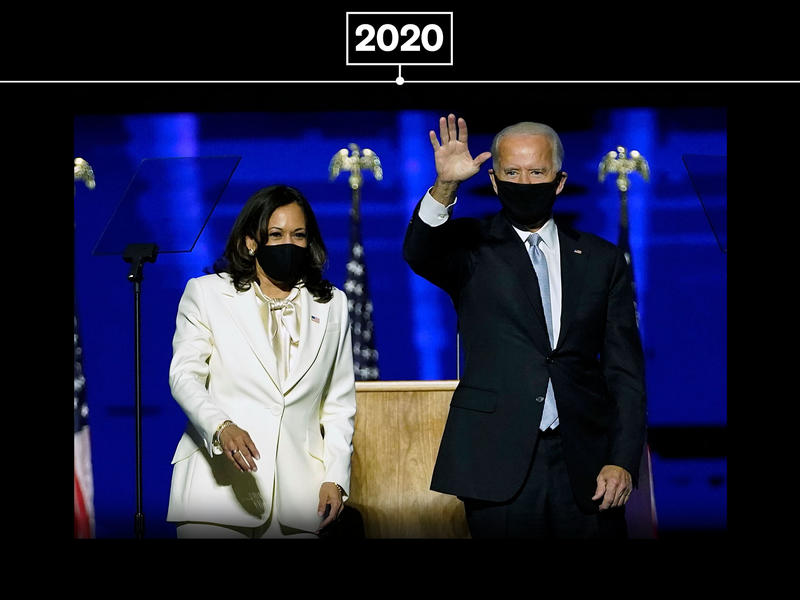 In 1953, at the age of 10, Biden's family moved to Wilmington, Delaware, where he attended school, taking an interest in American football and baseball. As a young child, he struggled with a stutter, something he would manage throughout his life and career.

After graduating in 1961 from high school, Biden enrolled at the University of Delaware where he completed a Bachelor of Arts degree, with a double major in history and political science, with a minor in English in 1965.

In the late 1960s, Biden attended law school and was admitted to the Delaware bar in 1969.

Just a year later, Biden entered politics for the first time, winning a seat on the New Castle County Council.

A brief stint in local body politics was enough for Biden to push for higher honours and in 1972 he defeated Republican incumbent J. Caleb Boggs to become the junior US senator from Delaware.

It was a challenging campaign for Biden, who struggled to secure financial backing and consistently polled lower than his opponent. However, on election night two weeks before his 30th birthday, Biden won by more than 3000 votes.

It was a short-lived celebration for Biden though. Just a month later while he was still setting up his senate office, tragedy struck when his wife Neilia and daughter Naomi were killed in a car accident. His sons Beau and Hunter were also involved in the crash and were taken to hospital.

Biden was sworn into office, the sixth-youngest US Senator in the country's history, while still at his sons' hospital bedside.

In 1975, Biden met school teacher Jill Tracy Jacobs and they married two years later in 1977. They have one daughter together, Ashley, born in 1981.

In the mid-1970s Biden spent time on the Senate Committee for Foreign Relations which he would later become chairman of.

He was also heavily involved in trying to limit the supply and distribution of weapons under the Jimmy Carter administration.

In 1978, Biden won re-election in a landslide victory and went on to hold his Delaware senate seat for 36 years with a 60 percent majority in most of his re-elections.

In what he described as a 'big mistake', Biden was the Democratic floor manager for the passing of the 1984 Comprehensive Criminal Control Act, a Republican-led law that was 'tough on crime'.

Biden formally declared a run for President of the United States on 9 June 1987.

At the time he was considered a strong candidate and made good first impressions as the 'next generation' to take over after the Reagan administration.

However, his campaign was thwarted by allegations of plagiarism, namely stealing lines from a UK labour leader Neil Kinnock and former President John F. Kennedy.

He formally pulled out of the running to be president on 23 September 1987 after more allegations of exaggerating his early life and college success surfaced. The election was won the next year by Republican George H. W. Bush (Sr).

Not long after his failed presidential run, Biden underwent emergency surgery after suffering two brain aneurisms in February 1988. He returned to the Senate in late 1988.

Upon returning to office, Biden took back his Chairman of the Senate Judiciary Committee seat.

He presided over the US Supreme Court confirmation hearings of Robert Bork, who was rejected by the Senate, and Clarence Thomas, who was confirmed. Both Reagan nominations were contentious at the time - Bork for his civil rights views and Thomas for the sexual misconduct allegations against him.

Biden was praised for his handling of Bork during the confirmation hearing and criticised for the way he dealt with the accusations against Thomas.

The following year, Biden helped push sweeping reforms to the crime act he had helped get across the line 10 years earlier.

The Violent Crime Control and Law Enforcement Act modifications included the Violence Against Women Act and Federal Assault Weapons Ban, two of what Biden calls his most significant pieces of legislation.

During the 1990s and 2000s, Biden was heavily involved in the business of the Senate Foreign Relations Committee, a committee he would chair in the late 2000s.

In 1991, he voted against the authorisation of the Gulf War.

In 2001, he supported the war in Afghanistan; the next year he voted in favour of the US invasion of Iraq. Years later he admitted regretting those decisions.

In late January 2007, 20 years after his first bid to become President of the United States, Joe Biden declared he would run for office again.

The 2007 Democrat campaign had stiff competition for Biden - he was up against Chicago senator Barack Obama and former First Lady Hillary Clinton.

Despite some strong performances during debates and banking on his experience in the Senate, Biden struggled in the polls, pulling out of the race after finishing fifth in the Iowa caucuses.

On 22 August 2008, seven months after pulling out of the Democratic race for president, Biden was named as Obama's running mate for the White House.

Biden was picked by Obama because of his appeal to working-class voters and foreign policy and national security experience in the Senate.

The two grew a strong bond during the lead up to the Presidential election, however, there was lingering tension between both men from the Democrat race when the two traded blows on the debating stage.

The tension was eventually resolved, and Biden went on to lead a strong campaign for Obama, including working on the ground in swing states and during debates against Republican vice-presidential hopeful Sarah Palin.

On 4 November 2008, Obama and Biden defeated Republican Senator John McCain (a friend of Biden's) and Palin, winning the election with 53 percent of the popular vote and 365 electoral college votes.

Biden also won his Senate seat for Delaware but resigned on 15 January after casting his last vote in support of the second round of economic relief following the Global Financial Crisis (GFC).

Obama and Biden were sworn into office on 4 November 2008. Biden's early years as vice-president focused on foreign policy, namely the wars in Afghanistan and Iraq.

He was also tasked with overseeing the infrastructure plan from Obama's stimulus package, aimed at helping the country through its recession following the GFC.

After four decades in politics, Biden had built up a reputation for faux pas and his vice-presidency was no exception.

Remarks about not using public transport during the height of the swine flu epidemic, his public support of gay marriage in a 2012 interview (against what Obama officials were saying at the time) and dropping an f bomb after the signing of the Affordable Care Act into law are some examples.

Before the 2011 re-election campaign began, Biden led negotiation between Congress and the White House for a resolution of federal spending. Biden worked on reaching a bipartisan deal to raise the US's debt ceiling and after months of negotiating he reached a deal with Senate minority leader Republican Mitch McConnell to pass the Budget Control Act 2011.

Biden was asked to remain as Obama's Vice-President running mate in October 2011, and they defeated Republican nominee Mitt Romney and his running mate Paul Ryan on 6 November 2012. Obama and Biden won 51 percent of the popular vote and 332 electoral college votes.

Obama and Biden were inaugurated to a second term on 20 January 2013.

During the early stages of their second term, Obama and Biden tried and failed to pass gun control reform through congress following the Sandy Hook Elementary School shooting.

Shortly after his son's death, Joe Biden declared he would not run for President of the United States in the upcoming election. Instead he endorsed former Secretary of State, Hillary Clinton.

Before leaving office, Biden was awarded the Presidential Medal of Freedom by Barack Obama.

Biden then took up a professorship at the University of Pennsylvania. He remained in the spotlight however, often criticising President Donald Trump in the media as well as commenting on climate change issues, LGBT rights and general politics.

On 25 April 2019, Biden officially launched his campaign for presidency.

Unlike his previous attempts, Biden was polling well in the Democratic presidential primaries. He was, however, still behind Vermont Senator Bernie Sanders early in the race.

He went on to defeat Sanders following a strong performance in the 'Super Tuesday' primaries and endorsement from fellow candidates Pete Buttigieg and Amy Klobuchar.

Sanders went on to endorse Biden in April 2020, as too did his former boss Barack Obama.

In August 2020, Biden was officially confirmed as the Democratic nominee for the presidential campaign.

During the campaign, Biden had been accused of sexual misconduct as well as non-sexual contact, dating back to the 1990s and 2010's.

Biden apologised for his actions but said there were no ill-intentions and that he would be more considerate moving forward.

Biden's son Hunter also faced unfounded allegations from the Trump administration of impropriety during his time at Burisma Holdings, a holding company in the Ukraine.

Despite the allegations, and an often-fraught campaign against incumbent President Donald Trump, Biden went on to win the election in November 2020. He received the most votes cast ever for a presidential candidate in a US election, 81,281,891 (51.3 percent), to Trump's 74,223,254 (46.9 percent). The election also had the highest voter turnout since 1900. Biden also won the electoral college vote 306 to Trump's 232.

President Trump, defiant in defeat, launched many legal challenges against states across the country, claiming voter fraud, only to come up empty handed.

Joseph Robinette Biden Jr was sworn in as 46th President of the United States on 20 January 2021.