An Australian-grown pumpkin has set a new record for the heaviest in the Southern Hemisphere at the 2021 Giant Pumpkin and Watermelon Festival in Kyogle in northern New South Wales. 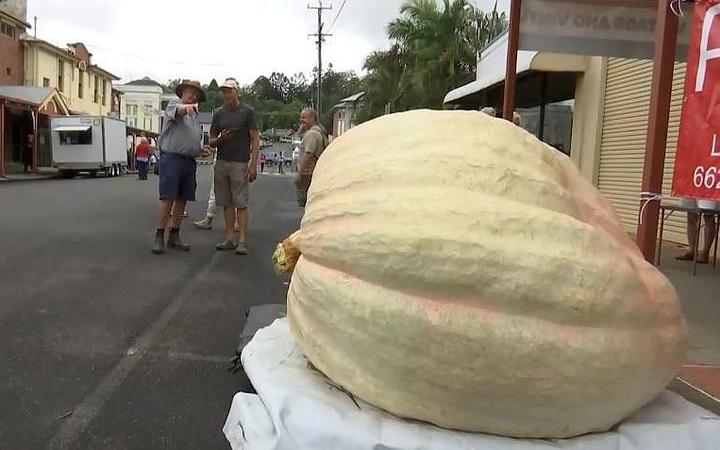 The Atlantic giant pumpkin grown by Dale Oliver weighed in at 867 kilograms.

Festival organiser John Leadbetter said it was a great achievement for Oliver and the festival.

While it did produce a record-breaking pumpkin this year, entries to the festival were down due to unfavourable growing conditions.

"It's just been too hot for it. We had hot, dry weather, and then we went to hot, humid weather, and they don't like that. They like to be dry and cool," Leadbetter said.

What does it take to grow a giant pumpkin?

Oliver, who set an Australasian record with a 743-kilogram pumpkin in 2015, said growing giant gourds involved a lot of work.

"People are changing the way they're growing them nowadays," he said.

While growers are able to control some elements, weather conditions are uncontrollable.

"The weather's your biggest battle here," he said.

"When we get them hot spells they stop growing, and it'll send them into maturity.

Oliver grew the record-breaking pumpkin at his nursery at Knockrow, north of Ballina, on the far north coast of NSW.

He said while some people do eat the flesh from giant varieties, they are usually fed to cattle.

"I'll take it home because I've got a few rellies who want to get photos with their babies, and we'll get the seed out of it because a few guys want the seed," he said.

The world's heaviest pumpkin, measuring 1190.49kg, was grown by Mathias Willemijns in Belgium in 2016.