Europe's daily Covid-19 deaths rose by nearly 40 percent compared with the previous week, the World Health Organisation (WHO) has told the BBC. 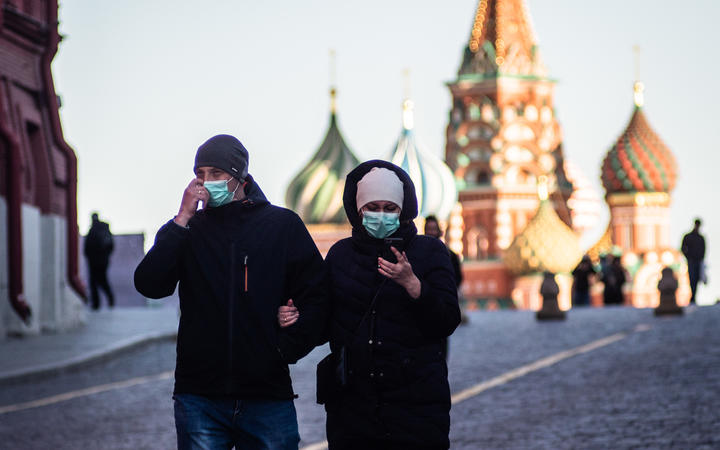 WHO spokeswoman Dr Margaret Harris said France, Spain, the UK, the Netherlands and Russia accounted for the majority of cases which increased by a third.

"The concern ... is that intensive care units in hospitals are now beginning to fill with very ill people," she warned.

There has been a sharp increase in Italy too, with 221 fatalities announced in the past 24 hours. The total number of fatalities in Austria went above 1000 on Tuesday.

Russia has the world's fourth highest number of Covid-19 cases after the US, India and Brazil. It recorded another 16,550 infections on Tuesday alone and authorities have now made the wearing of face masks compulsory in all crowded places.

While infections surged in Italy too, to almost 22,000 in the past 24 hours, officials said testing had also been ramped up. Protests took place in towns and cities across Italy on Monday evening against a new round of restrictions.

Speaking to the BBC's World at One programme on Tuesday, Dr Harris said: "Across the European region we're seeing an intense and indeed alarming increase in cases and deaths.

She said daily cases rose by a third compared with the previous week, while daily deaths increased by "close to 40 percent".

"Despite better management of hospital capacity, hospitals in several countries are filling up fast," she warned.

Dr Harris said the effectiveness of new restrictions imposed in a number European nations could only be analysed in two weeks' time because of "the lag".

"We will see the reduction in cases, but you don't see it overnight," the WHO spokeswoman said.

And asked whether the second wave would be worse than the first one, she replied: "We're going to see a different sort of peak.

"The good news is our hospitals are much better at understanding what's going on here, but the reverse of that is in gaining that experience they've been working incredibly hard for a very long time and they also know that what they are going to face is going to be grim.

"The other good thing in a sense is that the very large numbers we're seeing are in groups that ideally won't progress to the more severe illness - that's the younger groups. But that's not a guarantee.

"Those two factors suggest that we may not see the terrible rise in deaths that we saw in April," Dr Harris said.

What are the new rules in Russia?

From Wednesday, face masks will be mandatory in all potentially crowded areas including public transport, taxis, car parks and lifts, public health watchdog Rospotrebnadzor said. Regional authorities will have responsibility for implementing the new rules.

Russia brought in similar measures at the beginning of the initial outbreak in the spring but lifted them in July as the number of cases eased.

In addition, Rospotrebnadzor head Anna Popova recommended an overnight curfew for bars, restaurants and other public venues. Other recommendations include increased efforts to disinfect public transport, taxis and public spaces.

In total, Russia has recorded more than 1.5 million infections and 26,589 deaths, according to national figures.

In Italy, a protest against new restrictions in the northern city of Turin ended in police firing tear gas at demonstrators on Monday evening. Clashes were also reported in Milan. People have reacted angrily to the closures of restaurants, bars, gyms and cinemas from 18:00 since last Friday.

Researchers at the UK's Imperial College London say immunity against coronavirus may only last a few months after infection. They say the number of people testing positive for antibodies fell by about a quarter between June and September, with the biggest drop in those over 65.

Belgium has seen an 88 percent rise in hospital admissions, with officials warning that half of intensive care beds are already filled. Ten hospitals have asked medics who have tested positive - but shown no symptoms - to continue working.

In France, the government's health defence council will discuss introducing stricter measures. Extending curfews already in place in Paris and other cities is reportedly among the options. Interior minister Gerald Darmanin warned people to prepare for "difficult decisions".

Slovakia is to begin testing its entire population from this weekend to try to avoid harsher anti-coronavirus measures. Prime Minister Igor Matovic hopes to identify tens of thousands of infected people who, together with their families, would then spend the next 10 days in quarantine. "We had only two options, either general testing or complete lockdown," he said.

The Czech Republic has introduced a night-time curfew, which came into effect on Tuesday at midnight for a week. No-one is allowed to leave their home between 21:00 and 04:59 except to travel to and from work, for medical reasons or a few other exceptions.

All shops will be shut on Sundays and will close at 20:00 on other days.