At least a third of 270 whales stranded off the coast of Australia's Tasmania have died and more are feared to be dying, rescuers say. 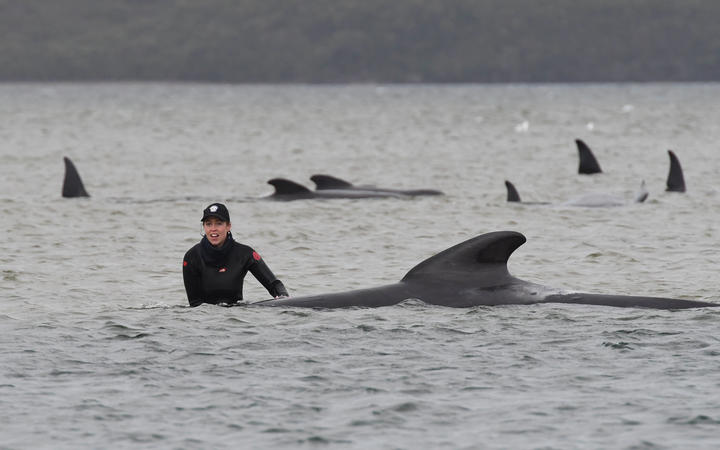 Rescuers are working to save the whales stranded on a sandbar in Macquarie Harbour in Tasmania. Photo: AFP

The mass stranding on the west coast of the island was discovered on Monday.

Marine biologists are scrambling to save the remaining pilot whales in a tricky operation likely to take days.

It's unknown what drew the whales to the shore. Whale beachings are common in the region, but one of this size has not been seen in over a decade.

Tasmania last recorded a mass stranding in 2009 involving around 200 whales.

Where are the whales?

Rescuers from the Tasmanian Maritime Conservation Program arrived late on Monday and found three groups of whales across Macquarie Heads - a remote tip of the island with limited vessel and road access.

About 200 of the mammals had washed up on a sandbar near a boat ramp, while 30 others were found several hundred metres away. Another 30 were found further inland along Ocean Beach.

Many of the whales are in "relatively inaccessible" locations, posing a challenge for rescuers.

How are they being rescued?

A team of about 40 trained rescuers began to "re-float" a small number of whales on Tuesday morning - using equipment to push the animals off a sandbar into deeper waters.

"Normally we're dealing with animals high and dry on the beach. This is different. We've got animals semi-buoyant so it probably won't take too much to re-float them - just involves a bit of grunt," said wildlife biologist Dr Kris Carlyon.

If the whales are doing well in the water, then the next step is to get them further out.

Dr Carlyon told reporters this would likely be a challenge against the strong tide. Boats might be used to help the manoeuvre.

However he said many of the animals may simply be too big or in an unsuitable location. Pilot whales can grow up to seven metres long and weigh up to three tonnes.

"We will take the animals with the best chance to start with," said Dr Carlyon.

He said rescuers knew from previous missions that pilot whales can survive three or four days being beached, and many in this group were in good "wet and cool" conditions.

A full assessment of the group was due later on Tuesday.

Officials have urged the public to stay away from the scene, saying they have enough helpers.

Why do whales beach themselves?

Around Australia and New Zealand different kinds of whales make seasonal migrations every year in pods as large as a 1000 animals.

Researchers say they follow a leader and their strong social bonds can lead to whole groups beaching themselves.

"It might have been a single misadventure by one or two of them and because pilot whales are such a social species, that may have drawn the other animals in," Dr Carlyon said.

In New Zealand in 2018, more than 200 pilot whales died over the course of a week in separate strandings off the nation's east coast.