Police have arrested 74 people during illegal anti-lockdown protests in Melbourne, including an alleged "agitator" who remains in custody. 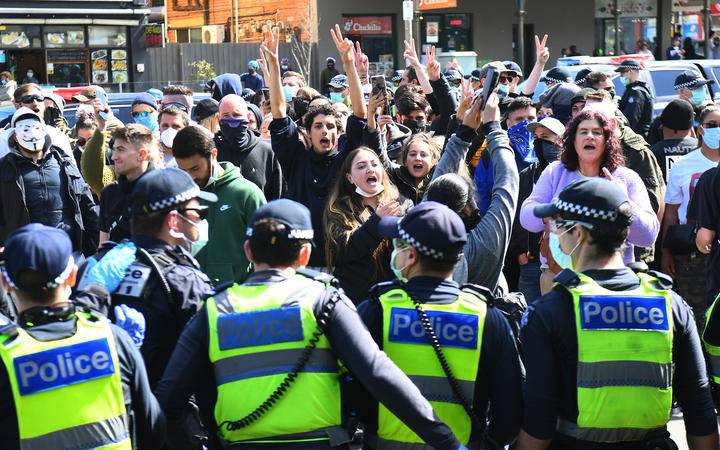 Officers said the "most significant activity" took place at the Queen Victoria Market where protesters chanting "freedom" were met with a heavy police presence.

The demonstrators at one point linked arms as they were surrounded by police officers.

Scuffles broke out as arrests were made.

A Victoria Police spokesman said there were between 200 and 250 people involved in the protest activity, and 176 were fined.

"A 44-year-old Burwood East man, believed to be a primary agitator for these protests, remains in police custody and is expected to be charged with incitement," the spokesman said.

Police said a search warrant would be issued for his home.

Another person was arrested for assaulting police. No police are believed to have been injured in the protests.

"Police were disappointed that many protesters were aggressive and threatened violence towards officers," the spokesman said.

It is the second day this weekend and the second week in a row of similar protests in and around the city's CBD.

The so-called Freedom Walk marches are billed as "a legal walk, allowing citizens to come together, get healthy and talk about getting our freedoms back".

Any protesting is outlawed in Melbourne under the current stage 4 restrictions, and people are only allowed to exercise for one hour a day within a 5 kilometre radius of their home. 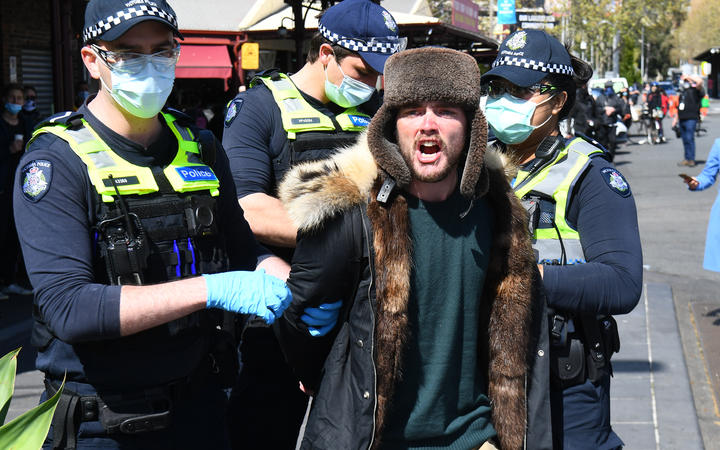 Police said investigations into the demonstration were ongoing and further fines were expected "once the identity of individuals has been confirmed".

"No protest, regardless of the cause … is safe, responsible and anything other than selfish at this time."

Yesterday, police arrested 14 people and issued more than 50 fines at what police called "disappointing" smaller protests at a number of Melbourne locations.

Last Saturday, more than a dozen people were arrested in Melbourne as "solidarity" rallies were held in Sydney and around the country.

Police say woman who filmed arrest will be charged

Police say they plan to charge a woman, who posted on social media a video of her being dragged out of her car at a coronavirus checkpoint, with assaulting police.

In the video, Natalie Bonett tells an officer, "I don't feel safe," when they ask her to get out of the vehicle.

She is seen yelling, "Get off me," as the officer pulls her out of the car and a passenger yells: "She's actually sick, relax."

Police said she was stopped at the vehicle checkpoint because her mobile phone was obstructing her view due to its position on the windscreen.

"The woman was warned that if she did not provide her details, she would be arrested," a Victoria Police spokeswoman said.

"She still refused and was asked by police to get out of her car. When she refused this request, she was taken from the car by officers and taken into custody."

She was later released. Police said she was expected to be charged "with driving with obscured vision, fail to produce licence, fail to state name and address, resist arrest, assault police and offensive language".

"And all of that could have been avoided if the person had simply, after the fourth time she was asked, given her name."

Police issued 200 fines in the 24 hours to Sunday morning for breaches of the health directions, including to 16 people for not wearing a face covering.

A Victoria Police spokeswoman said those who breached the rules included a Sale couple who drove 185 kilometres to Dandenong "because they needed to buy specific vegetables that their baby liked".

A Geelong homeowner was fined after police found six males drinking there and "when police arrived, all males jumped the back fence".

There were 48 fines issued for curfew breaches.

Nine people were fined at vehicle checkpoints on Saturday out of more than 8500 checks.