Calls for more punitive action against anti-lockdown protesters, are being dismissed as unnecessary by organisers and some scientists alike. 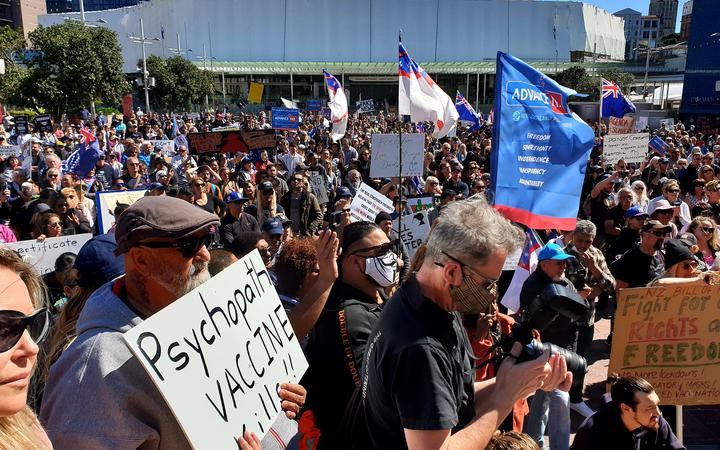 One of the organisers of the lockdown protest in Auckland yesterday, Advance New Zealand co-leader Jami-Lee Ross, said he had no concerns about thousands of people flouting the Covid-19 restrictions.

Protesters failed to observe social distancing and very few were wearing masks, sparking fears they could have spread the virus further.

Ross said protesters were reminded of the rules.

"At the start of the rally protesters were told what the requirements were, that New Zealand police had passed on told us," he said.

"There was a respectful relationship with the police, and they were just doing their job."

He said ultimately, the protest was about was questioning whether the country is on the right track, and whether the community should learn to live with the virus.

However, protesters also took the opportunity to voice opposition to 5G and vaccines, or claim the virus was a hoax - just days after a government warning misinformation could impede progress to alert level 1.

That struck science denial expert Dr Fiona Crichton as the "most interesting" aspect of the protest, because it showed how people click on one conspiracy theory online and become targets for others through social media algorithms.

"We know that the more you use the internet, stumbling on one conspiracy theory, you're going to be exposed to a lot more," she said.

"If you are the kind of person that is perhaps a little disenfranchised right now, doesn't trust the government, you're starting to believe that narrative."

She said misinformation would be very distressing to people who did not understand the complete lack of scientific basis, but it also showed why the police should not take a punitive approach.

Dr Crichton said yesterday's "flagrant flouting" of alert level 2.5 rules was a slap in the face for people who have followed them - but she supported the "educative approach" the police were taking.

"If their thinking is ... that they're being lied to by authorities, authorities coming and stepping in and starting to be very forceful in the way that they disperse people and perhaps go and fine them, all it does it entrench those beliefs and disenfranchises these people more," she said.

Ross said his party will no longer take part in weekly anti-lockdown rallies.