South Korea, a country held up as a model for its response to Covid-19, is on the brink of a new nationwide outbreak, according to officials. 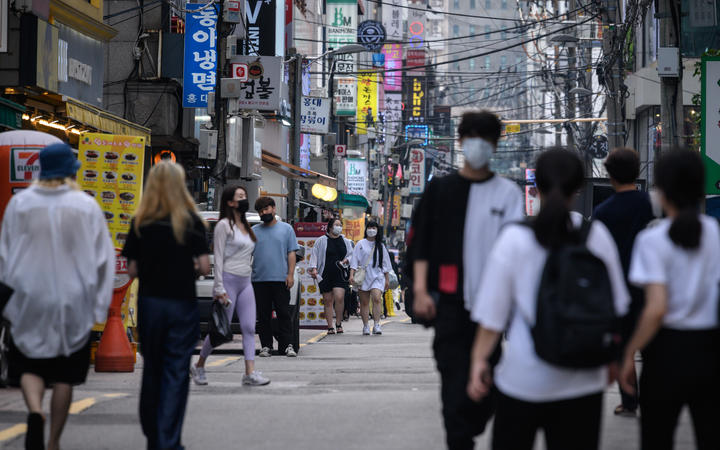 The latest outbreak of coronavirus cases centred around a right-wing Presbyterian church has spread to all 17 provinces throughout the country for the first time.

Social distancing rules have been stepped up. Masks are now mandatory in Seoul. The government is also considering whether to close schools and businesses.

Infectious diseases experts in the country have called on the government to step up social distancing measures even further, warning that "hospital beds are quickly filling up and the medical system is nearing its limits".

The Korea Centers for Disease Control and Prevention (KCDC) has admitted that about 20 percent of all new cases are of unknown origin - despite the country's efficient contact tracing system which can track down around 1000 potentially infected patients in an hour.

South Korea's fight against Covid-19 began in February after an outbreak at a Christian cult called the Shincheonji Church of Jesus in the city of Daegu, about 200km south of Seoul. Within weeks, the outbreak was under control.

But things are different this time.

The majority of new cases are all close to the heavily populated capital city which is home to more than 10 million people.

And one of the biggest concerns is that many of the far-right worshippers who are potentially infected believe the virus was planted as part of a conspiracy to close it down.

Many are refusing to be contacted, let alone tested.

And there is also one other major risk factor. Infected members of the Shincheonji church were mostly young - in their 20s. But the current outbreak is affecting a much older age group.

Members of the Sarang Jeil Church, which roughly translates as "Love Comes First", are right-wing conservatives and maintain that President Moon Jae-in is a communist and a puppet of China and North Korea.

Before the coronavirus outbreak, they would gather in their hundreds in the centre of Seoul each Saturday loudly rallying and marching past the Blue House to denounce the South Korean leader. 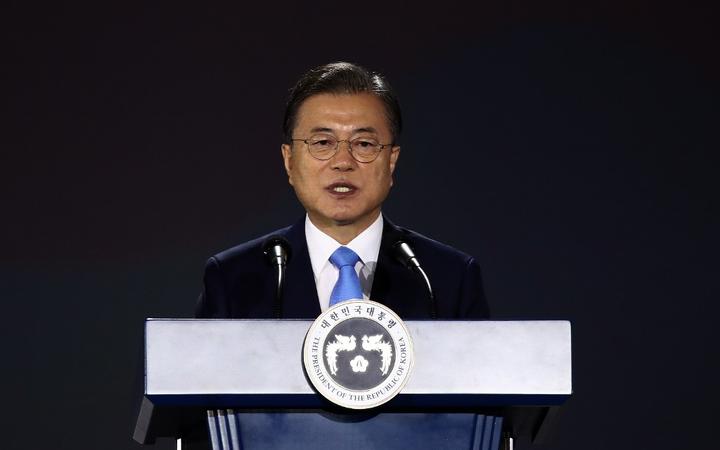 One of the church's pastors, Lee Hae-suk, told my colleagues at Reuters last week - after she tested positive for the virus - that this was a plot to "kill Sarang Jeil Church by increasing the number of confirmed cases".

When asked who she thinks is behind the "plot", she said: "Moon Jae-in".

Controversial Pastor Jun Kwang-hoon issued a statement on YouTube claiming that he had "five different tip-offs that there was a virus terror that sneaked through the Sarang Jeil Church".

Other members claimed it had been spread by tainted bottles of hand sanitiser. At a press conference last week a church spokesperson claimed that pro-North Korean sympathisers had infiltrated the church and deliberately spread the virus.

The conspiracy theories are making it difficult for South Korea's contact tracers. In total more than 875 members have so far tested positive, but health officials believe hundreds more could be infected and potentially spreading Covid-19 to others.

Church members took part in a huge rally on 15 August in the centre of Seoul along with tens of thousands of others, most of whom were more than 50 years old.

About 200 people have now tested positive for the virus after the rally. 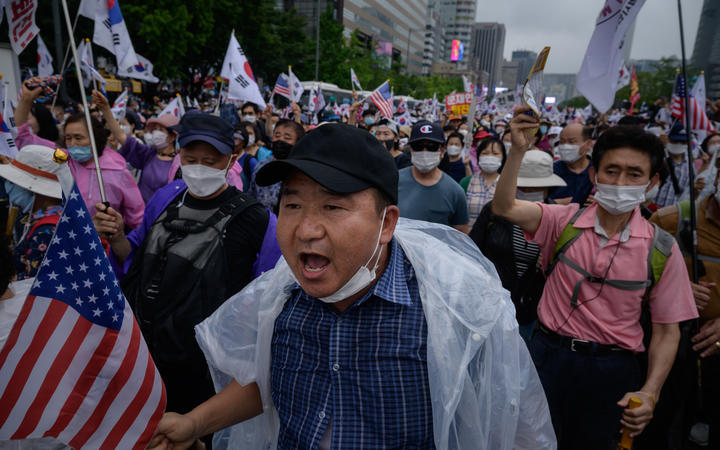 The government said it had asked the church for a full list of members who attended, but they didn't get it.

It led to the police asking for a search warrant on Friday night. They eventually raided the church headquarters to find a full list of members' names to try to contact them.

The church denies these accusations.

"Sarang Jeil Church and Pastor Jun Kwang-hoon have been compliant to the current government's prevention measures," said lawyer Kang Yeon-jae. "We closed the church as soon as there was a confirmed case. We told all church members to not attend church and to get tested for the virus."

But domestic media showed footage of what they claim are church members shouting and swearing at contact tracers.

Meanwhile the virus continues to spread, including among seven police officers who were at the 15 August rally to maintain order.

Churches across the country were urged to hold services online on Sunday, but Seoul city government said 17 did not comply.

President Moon has called for penalties for those deliberately obstructing anti-virus measures, including those conducting "all-out misinformation campaigns".

The peak is yet to come

New virus cases with unknown infection routes continue to emerge and health officials are stepping up the warnings and the preparation for an outbreak within the country.

KCDC director Jeong Eun-kyeong has said that the peak of this outbreak has yet to come.

Today she pleaded with people to comply with social distancing measures to keep infection rates as low as possible.

"Please stay home and wear a mask if you do go out. Please join us in this social distancing campaign once again so that we can continue educating our students, supporting our local economy, and preventing the medical system from collapsing. And so that we keep our patients away from danger."

Dr Ju Young-Su at the National Medical Centre in Seoul told us his aim was to keep the death rate as low as possible. His job is to allocate critical beds to patients. He is preparing for the worst case scenario - that the rally could have infected more than 2000 people.

"The Korean medical teams will put our best efforts into keeping them all alive," he told us.

In total, 309 people have died in South Korea as a result of coronavirus. One of the lowest death tolls in the world.

This country has been well prepared. It has a renowned test, track and trace system.

For months health officials have managed to stamp out small clusters and prevent the virus from spreading.

But this latest outbreak shows just how difficult coronavirus can be to contain. The case numbers are still much lower than elsewhere in the world, but the fear and alarm in Seoul is higher than it has ever been.

This could prove to be South Korea's biggest Covid-19 test yet.