Israel and the United Arab Emirates have agreed to normalise relations. 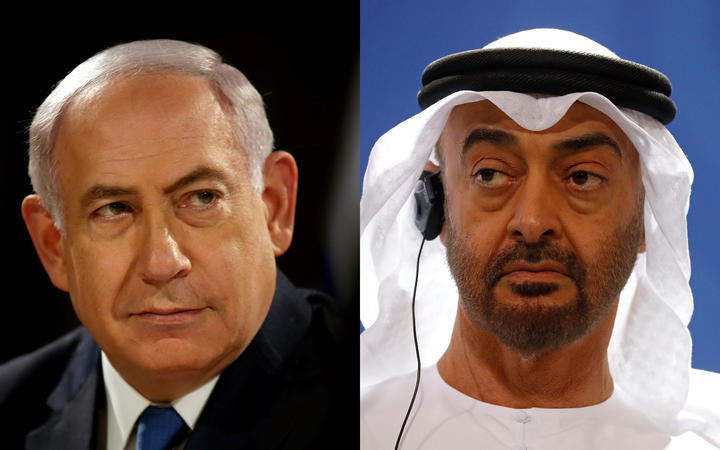 As a result, they added, Israel would suspend its controversial plans to annex parts of the occupied West Bank.

Until now Israel has had no diplomatic relations with Gulf Arab countries.

However, shared concerns over Iran's regional influence have led to unofficial contacts between them.

The UAE's ambassador to the US, Yousef Al Otaiba, said it was "a win for diplomacy and for the region".

"It is a significant advance in Arab-Israeli relations that lowers tensions and creates new energy for positive change," he added.

But a senior Palestinian official, Hanan Ashrawi, condemned the deal, saying the UAE had "come out in the open on its secret dealings/normalisation with Israel" and telling Prince Mohammed: "May you never be sold out by your 'friends'."

It marks only the third Israel-Arab peace deal since Israel's declaration of independence in 1948. Egypt signed one in 1979, and Jordan in 1994.

What has been agreed?

In the coming weeks delegations from Israel and the UAE will meet to sign bilateral deals regarding investment, tourism, direct flights, security, telecommunications, technology, energy, healthcare, culture, the environment, the establishment of reciprocal embassies, and other areas of mutual benefit.

Israel will also "suspend declaring sovereignty over areas outlined" in President Trump's Vision for Peace between Israel and the Palestinians, in which he backed an Israeli plan to annex Jewish settlements in the West Bank and the strategic Jordan Valley.

The Palestinians have warned that such a move would destroy their hopes of a viable future independent state and violate international law - a stance supported by much of the international community.

The UAE Minister of State for Foreign Affairs, Anwar Gargash, said the UAE's recognition of Israel was "a very bold step" to stop the "ticking time bomb" of Israel's annexation of the West Bank.

The UAE, he said, sees this as "a stoppage of the annexation, not a suspension".

Asked about Palestinian criticism of the UAE move, he recognised that the region was very polarised and he expected to hear "the usual noise". "We agonised over this," he said, but eventually decided "let's do it".

The joint statement says Israel will "focus its efforts now on expanding ties with other countries in the Arab and Muslim world", and that the US and UAE will work to achieve that goal.

The UAE and Israel will also join the US to launch a "Strategic Agenda for the Middle East", with the three leaders noting that they "share a similar outlook regarding the threats and opportunities in the region, as well as a shared commitment to promoting stability through diplomatic engagement, increased economic integration, and closer security co-ordination".