Oregon Governor Kate Brown has accused federal agents in unmarked cars who apparently detained protesters in Portland of a "blatant abuse of power". 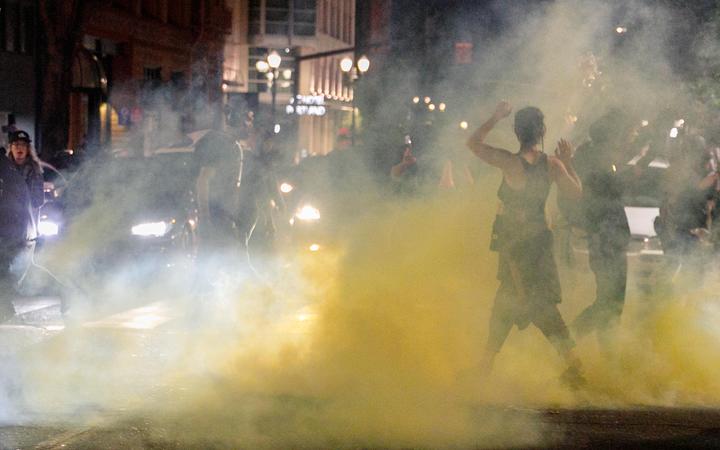 Police confront demonstrators as Black Lives Matter supporters demonstrate in Portland, Oregon on 4 July for the 38th day in a row. The protests still continue in mid-July. Photo: AFP

Federal officers, deployed by US President Donald Trump, have also fired tear gas and less-lethal munitions into crowds of demonstrators.

Activists have been protesting against police brutality since George Floyd's killing in police custody on 25 May.

A report from Oregon Public Broadcasting (OPB) contained detailed accounts of witnesses who had seen federal law enforcement dressed in camouflage emerge from unmarked vehicles, grab protesters without explanation and drive off. 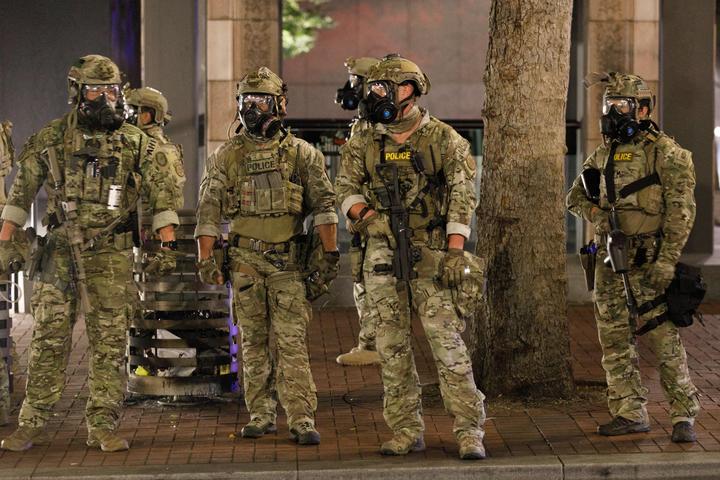 The last week has seen a violent escalation between protesters and federal agents, deployed two weeks ago by Trump to quell civil unrest.

Since at least 14 July, OPB reports, federal agents have been jumping out of unmarked vehicles throughout the city, and grabbing protesters seemingly without cause.

Video checked by the broadcaster shows a protester, Mark Pettibone, describe how on 15 July he was "basically tossed" into a van containing armed people in body armour.

Pettibone said he was taken to a holding cell in a federal courthouse, where he was read his arrest rights. After he declined to answer questions, he was released without any citation or arrest record.

According to OPB, federal officers have charged at least 13 people with crimes related to the protests so far.

Some have been detained by the federal courthouse that the agents were sent to protect, but others were seized streets away from federal property, reports the Associated Press.

What has the Trump administration said?

Arriving in the city on Thursday to meet federal law enforcement, the acting secretary of homeland security defended the agents against the assembled "anarchists".

In a nearly 1700-word statement, Wolf blamed state and city authorities for failing to "restore order". He said their response had "emboldened the violent mob as it escalates violence day after day".

"The city of Portland has been under siege for 47 straight days," he wrote.

"Each night the violent anarchists destroy and desecrate property, including the federal courthouse, and attack the brave law enforcement officers protecting it."

Wolf's comments echo those of Trump. This week, the president applauded the efforts of federal agents in Portland, saying officers had done a "great job".

"Portland was totally out of control, and they went in, and I guess we have many people right now in jail," he said at a press conference on Monday. "We very much quelled it, and if it starts again, we'll quell it again very easily."

Arresting people without probable cause, Brown's spokesman, Charles Boyle, said on Friday, was "extraordinarily concerning and a violation of their civil liberties and constitutional rights".

Portland Mayor Ted Wheeler and other local officials have said they did not request assistance from federal agents and have asked them to leave.

"Keep your troops in your own buildings, or have them leave our city," Wheeler said on Friday.

The American Civil Liberties Union also condemned the reported actions of the agents.

"Usually when we see people in unmarked cars forcibly grab someone off the street we call it kidnapping," the organisation wrote on Twitter. "These actions are flat-out unconstitutional and will not go unanswered."

Who are the federal agents?

US Customs and Border Protection (CBP), a law enforcement agency within the Department of Homeland Security (DHS), confirmed it was responsible for at least one of the detentions.

The agency told the Daily Caller they had reason to believe the individual had assaulted officers at the protests and vandalised federal property, so they "quickly moved the suspect to a safer location for further questioning".

"Violent anarchists have organized events in Portland over the last several weeks with wilful intent to damage and destroy federal property, as well as injure federal officers and agents," a CBP spokesman told US media. "These criminal actions will not be tolerated."

The Nation magazine reports that the CPB cited their authority under the Protecting American Communities Task Force (Pact).

Pact was set up last month by DHS in response to Trump's executive order on protecting American memorials, which called for heavy penalties on anyone who damages a monument.