Captain Sir Tom Moore has been knighted in the Queen's first official engagement in person since lockdown. 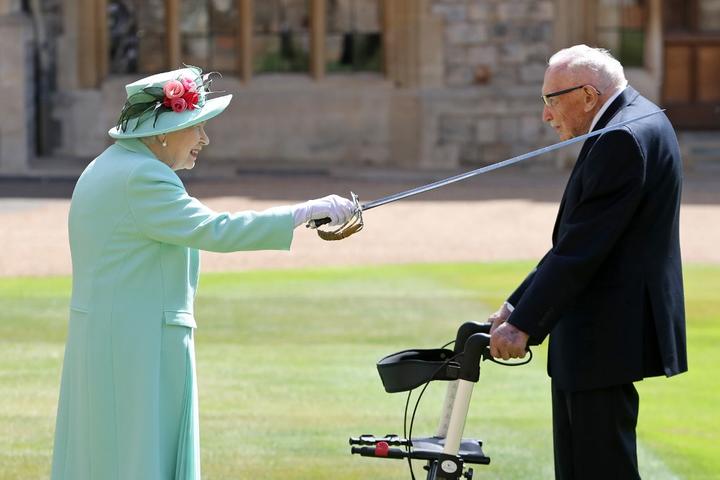 The investiture to honour the 100-year-old, who raised more than £32m (NZ$61m) for NHS charities, was staged in a "unique ceremony" at Windsor Castle.

He has been recognised for walking more than 100 laps of his garden in Marston Moretaine, Bedfordshire.

"I am absolutely overawed," he said,

"This is such a high award and to get it from Her Majesty as well - what more can anyone wish for? This has been an absolutely magnificent day for me."

The Queen personally praised Capt Sir Tom, telling him: "Thank you so much, an amazing amount of money you raised."

In May, Prime Minister Boris Johnson made a special nomination for the war veteran to be knighted.

Buckingham Palace said it was the first time the ceremony had been held in the strictly socially-distanced format.

The Queen used the sword that belonged to her father, George VI, to bestow the insignia of Knight Bachelor upon Capt Sir Tom.

Her arrival was announced by the sound of bagpipes played by the Queen's Piper, Pipe Major Richard Grisdale, of the Royal Regiment of Scotland.

Earlier, Her Majesty, the Duke of Edinburgh and other close family attended the unannounced wedding of their granddaughter Princess Beatrice to Edoardo Mapelli Mozzi in a nearby chapel.

Other Royal investitures have been put on hold during the pandemic with those scheduled to take place at Buckingham Palace and the Palace of Holyroodhouse in Edinburgh in June and July postponed.

Mrs Ingram-Moore said: "It is just the most sensational day, of all of the things Tom's been honoured by this is truly the icing on the cake."

Capt Sir Tom, who was given the honorary title of colonel on his 100th birthday, had initially set out to raise £1000 (NZ$1900) for NHS charities by repeatedly walking a 25m loop of his garden.

But he eventually raised £32,794,701 from more than one-and-a-half million supporters.