Tom Moore originally wanted to raise £1000 for NHS Charities Together by completing laps of his garden. 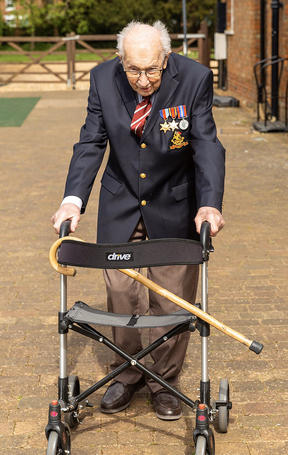 But he has now exceeded 10,000 times his initial target thanks to donations from nearly 500,000 people online.

Britain's Health Secretary Matt Hancock thanked Moore for his efforts and said he was "an inspiration to us all".

Moore began raising funds to thank the "magnificent" NHS staff who helped him with treatment for cancer and a broken hip.

With the aid of a walking frame, he aimed to walk 100 laps of the 25m loop in his garden in Marston Moretaine, Bedfordshire, in 10-lap chunks, before his 100th birthday.

"Every penny that we get, they [the NHS] deserve every one of it," he said, as the total exceeded the £5m mark earlier.

NHS Charities Together, which support health service charities and will benefit from the funds, said it was "truly inspired and humbled".

More than 490,000 people from around the world have donated money to his fundraising page since it was set up last week.

Moore, who is originally from Keighley in West Yorkshire, trained as a civil engineer before enlisting in the Army for WWII, rising to captain and serving in India and Burma.

At the point when the fund hit £5m Mr Moore's daughter Hannah Ingram-Moore told the BBC the amount raised was "beyond our wildest expectations".

At the government's daily press conference the health secretary said: "Captain Tom, you're an inspiration to us all, and we thank you."